I’ll be honest, I think that pixel-perfect recreations of retro game experiences is a bit played out. In Super Meat Boy it was cool, but seemingly hundreds of indie games and Shovel Knight later, it was a bit old. I was there too, and it was a great time, but I think it’s time to let go.  As a crutch it’s getting a little bit rickety.

That doesn’t mean I don’t like pixel art. It’s a legitimate almost mondrian-esque style that has its place in the lexicon of art history that, while perhaps overplayed in the game space right now, is still culturally relevant and absolutely eye catching in other mediums.  And I love when it’s used properly.  The IT Crowd DVD menus never fails to amuse me, for example.

So imagine my delight when I spotted The Battle At Kemble’s Cascade, a game that wears its classic arcade shooter influences on its sleeve, as it strives to reproduce the genre in board game form. And wow is it pretty – one look at the board and its cards and you’ll swear it’s a Bitmap Brothers or Cope-Com joint.  The characters alone have that Xenon-esque feel to them that really evokes that era of shooters on the Amiga 500.  As a Commodore kid myself, and having a particular soft spot for games of that ilk, I simply had to have it.  Although perhaps more than an argument in favour of well-done pixel art, The Battle At Kemble’s Cascade is a reminder of of just how great the hand-drawn box art we got in 80’s was. I was practically sold on it before i’d even picked it up.

The funny thing about pixel art, or at least the modern use thereof, is that is focuses on such a tiny part of the style’s history.  The Mega Mans and the Marios are all well and good to mimic in the name of nostalgia, but where’s the Turrican and Aarbron mimicry?  Modern pixel art  has morphed into something in and of itself, evoking nostalgia for a certain crowd, and in doing so under representing what the style means to many others.  It’s this mimicry of mimicry that has led it to a point where it’s all, to be frank, a bit samey.

But The Battle At Kemble’s Cascade is the antithesis of the modern ‘throwback’ movement sweeping across videogames, and the sort of celebration of aspects of my childhood I hold dearly   I can absolutely get behind . It’s the sort of clever ode to the 80’s shooter that you’d expect from its european designers at the epicentre of the home computer movement, bringing to life the both the art and gameplay of the genre without simply recreating it piece by piece.  And as a tribute to classic 80’s shooters, it is absolutely bang on target.  As a boardgame?  I guess I’ll soon find out. 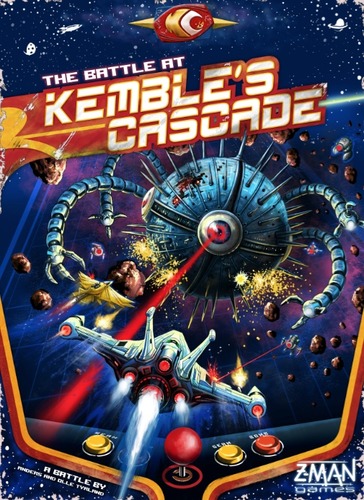