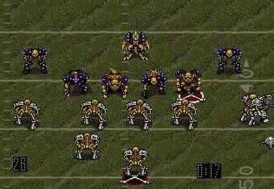 Mutant League Football eh, yeah, that old chestnut.  You know the one that everyone talks about seemingly every five minutes, pining for its return, practically begging to take to the field as a mutant with tracks instead of feet?  Yeah, well it was one of seemingly hundreds of ‘fantasy’ sports video games that took a shotgun to the sports we know and love, blew their brains out, and left them covered in blood and more extreme than ever before.  And we loved it, so much so in fact that I’d hazard a guess that anyone over the age of 25 has a special little place in their heart for at least one of those virtual bloodsports, Mutant League Football or otherwise.  Extreme violence was the next evolution of sports in the 90’s and we lapped it up.

I would’ve been about five years old when I first got my taste of blood, with the Bitmap Brothers’ futuristic gaelic footy-ice hockey hybrid, Speedball. And it was great.  But it wasn’t until the second game, Speedball 2: Brutal Deluxe, that I fell head over heels in love with the series.  Taking Brutal Deluxe to the top of the tables as with any other sports game was a real treat, but it was the getting there that was the real joy, as you build up a rag tag bunch of souped-up hardly-humans ready to send anyone that stands in your way to hospital.  And hospital you will send, as you rack up points for laying the bodies of your opponents out on the cool-hard steel floor, bringing play to a screeching hault.  Violence is part and parcel – practically a prerequisite – for victory as you come up against the likes of Violent Desire and Steel Fury in the pursuit of greatness.  The future of sports and society more broadly is a violent one, if you ask the good people of the video game industry.

Fast forward 10 years, multiple generations of hardware later, and we got the closest thing to Speedball 2 in a decade, in Deathrow.  But nothing had really changed, and while the game was a fantastically solid piece of software, the personality that Speedball 2 exuded was gone.  But it didn’t matter, as people like me couldn’t wait to satiate our taste for blood, under the guise of a sports game.  Sadly the audience had moved on and sales were low, so while Deathrow didn’t fall far from the Speedball 2 tree, was simply built on sentiments of a bygone era.  So with nowhere to go the futuristic sport genre simply disappeared.

But the ideas and concepts of those games lived on, appropriated by other genres looking to ignite a spark in the player base, ending up with games seeded with far more macabre premises like The Club.  Balls has given way for guns, and goals for kills, and bloodsport really meant just that.  It was effectively the gladiator of the modern day, the lower classes being exploited by the wealthy, made to hunt down and kill each other for their entertainment.  But it was still futuristic sport built on the foundations of societal breakdowns, with less stringent rules and regulations and care for human well-being, and with excessive violence being the glue that holds it all together.  The Club isn’t your traditional sports game, but underneath all the third person shooting and headshots, developer Bizarre Creations was leaning on the same premise that the Bitmap Brothers had almost two decades before.  Futuristic sports and violence in these worlds came packaged together in a neatly tied together bundle.

In fact it usually is the excessive violence that is the only major departure from the sports our kids play at school and we all see on television.  When we’re given the opportunity to make changes to our sports, make them more fantastical, it’s perhaps a sign of the times or the industry that violence is the first place we go.  We could have players with wings or time travel – we could even have teams of jedi – but instead we put spikes on the players’ gloves and call it a day.  It is perhaps indicative of our contempt for our own species that we envisage a dystopian future for ourselves, where even the rules on the pitch are lost in the fullness of time.  But that aside it also shows an inherent awareness of just how finer line there is between civility and disorder, how if we remove the rules we’re no better than your common animal.  Or mutant in the case of Mutant Football Leagues.

In a perverse way, these overly violent takes on sports we don’t think twice about playing in real life, appeal to us on an almost primal level.  But perhaps most strikingly, these often dystopian futuristic blood sports are the proof in the pudding that when it comes to sport, violence and physical aggression are generally accepted by society.  You only have to watch a game of Rugby Union – a game I love dearly – to see that sport is held to entirely different standards from other often more artistic mediums.  We accept it as part of the game, and govern it accordingly, through very strict rules and regulations.  The NFL players practically wear chain mail, cricketers wear helmets, and Rugby tackles are strictly monitored to mitigate the risk of spinal injuries.  But it’s still there, and in fact, is often an integral part of the game in real life.  Despite the increased prevalence of violence, there isn’t a big gulf between Speedball 2 and the sports we watch week in and week out, cheering as players hit each other with enough force to move mountains.  Video games just take this to the next logical extreme, making physical harm and violence an incentivised part of the game.  And Speedball 2 just happens to be the best example of it. 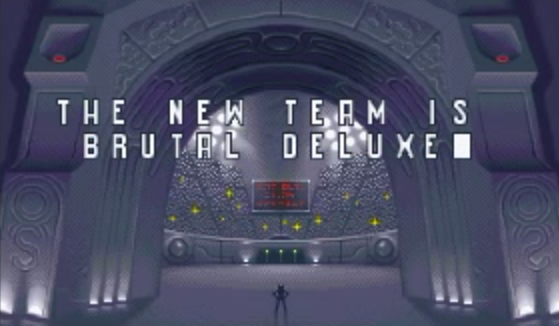 Join 2,412 other followers
My Tweets