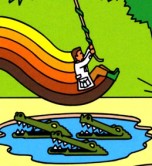 Yeah, I’m well versed in Atari’s sordid history, allegedly bringing the gaming market to a crash. I’m also aware of the meteoric rise of Activision in that same period, driven by recognition hungry developers who more than anything, just wanted their name on the box.  I happen to also have held an Atari 2600 joystick or two in my life, admiring the stylish woodgrain panels on the front of the system, and playing a round or two of Asteroids or Centipede while admiring their simplistic charm.  But being just a tad over 30 now, it doesn’t take a mathematical genius to see that I was barely a twinkle in my parents’ eyes when the 2600 was at its peak, and so the rise and fall of that little American company that could came and went while I was still well and truly relieving myself directly into my pants.

So to say I’m not an Atari veteran is an understatement.

But years after Atari had come and gone, and other companies had risen to take its place at the top, there I was sitting in my teenage bedroom, enjoying Activision’s classic Atari games in much the same way a mullet-sporting 80’s teen wearing stonewash jeans and a jean jacket would have.  Of course I was sitting there in the early 2000’s on hardware umpteen jigawatts more powerful, clothing that in hindsight was only slightly less embarrassing, and a television that while now is antiquated was modern for its time, earning patches and dealing with a rolling picture all the while listening to a mixtape of bands including Naked Eyes and Twisted Sister.  For that moment in time I was an 80’s teenager.

Activision Anthology on the Playstation 2 was my gateway into the time before the Euro-centric home computer boom of the 80’s, and of course the rise and rise of the Japanese console manufacturers.  It was a time of mechanically simple games that relied on charm and the pursuit of high scores, of games that required little more than quick reactions and pattern memorisation, and a time where every game courted the competitive streak and sibling rivalry in every one.  They were in many ways the formative years of video gaming as we know it today, and while the history of Atari systems and its games taken in isolation couldn’t be more uninteresting to me, I couldn’t help but be utterly mesmerised by that collection of forty-something 4k artefacts.

I could never have imagined that, with games like Ridge Racer V and Gran Turismo 3 vying for my attention, what equates to a teeth brushing shoot ’em up of Plaque Attack would keep me glued to the screen in a ‘one more coin’ kind of way.  And in isolation they probably couldn’t have.  There was nothing particularly special about Barnstorming but I spent hours playing it, nor was playing multiplayer Ice Hockey any better than almost any subsequent sports game release.  But there I was sitting in front of the telly fixated on these video games most of which predated me, games that weren’t necessarily within my wheelhouse, and games that comprised someone else’s gaming history and nostalgia.

That’s when I realised that the history of the medium is more than just the games themselves.  It’s a function of its time – the sights, the sounds, the tangibility – that makes people hold these experiences dear.  Just as I would always associate the games I played with a time and place, there was something intrinsically 80’s about the Atari, something that could never be separated and enjoyed in the same way out of context.  And whether it be the flickering of an old cathode ray tube in a dimly lit room or Wall of Voodoo’s Mexican Radio playing on the very latest in tape deck technology, for many, playing these very old and very simple games takes them back to a time where their whole lives were ahead of them and where technology was changing the very fabric of society. Literally if you were dedicated enough to take a polaroid of your scores to score a coveted cloth patch to show off to the world.  And Activision Anthology was a window back into that world.

To say that the Activision Anthology was was a historical video game collection done right isn’t doing it justice.  It perfectly recreated a point in time, enabling those of us who weren’t around to live someone else’s history, and bask in everything that made that moment in video game history so special to so many people.  It allowed me to be a tourist in someone else’s video game history, into a time that I have no recollection of, and certainly no conditioned fondness for.  I don’t remember Atari, I don’t remember Safety Dance being on the radio, and I sure as hell don’t remember a time where wood-panelling was the pinnacle of home electronic design.  But for those precious few months in the early 2000’s, I could’ve sworn I did.