I’ve heard tales of Loco Malito, a mysterious developer of a series of free retro games (most of which can still be downloaded at his site). I’ve heard about cult hits like The Curse of Issyos, Hydorah, and Maldita Castilla, and been meaning to try one of them out, but never got around to them. What better time to start than with a copy of his latest release, Super Hydorah, an updated and expanded version of his free classic, Hydorah.

You may notice that the game looks more than a little bit like Gradius, and maybe a bit like other classic shooters like R-Type and Darius. Well, it feels a hell of a lot like those games too. The enemies and environments are a delightfully surreal buffet of retro sci-fi design, and it all wants to kill you in many horrible ways. Much like it classic influences, your life in Super Hydorah depends heavily on your ability to snag vital ship upgrades, as well as being able to hold on to them.

There are many different weapons, sub-weapons, and power attacks to be found and unlocked, and you can choose any number of different combinations between each level (choose carefully though, some weapons are much better for some levels than others). You also get to keep all your special weapons, unlike the old days where you’d usually lose them entirely upon death. Instead there’s a weapon upgrade system, where you can get power-up drops that will raise their power up to a certain level, and when you die you only lose a bit of your upgrade power instead of the whole weapon.

Don’t think that this means this game is going to be any easier than those of the old days though. This is still quite a challenging game. It’s not quite Cuphead level of frustration, but it doesn’t have a “simple mode” for you to fall back to either. It’s hard, and that’s that. While you do get unlimited continues and there are a pretty generous amount of extra lives to be found, this is a game that, like its predecessors, punishes failure and kicks you while you’re down instead of offering a helping hand.

That “forgiving” weapon upgrade system I mentioned earlier can end up digging you into quite a hole when you find yourself stuck on a particularly difficult level or boss only to be faced with the harsh reality that each death actively makes you noticeably weaker. Dying not only knocks both your weapon and sub-weapon power levels down a few notches, but also subtracts one of both your remaining power weapon uses and your speed upgrades, and continuing resets all your upgrades and your score back to zero. You basically need to learn to die as little as possible and try to avoid continuing entirely if you can, otherwise you’ll just keep getting knocked back down to a form that’s too weak to keep up with the increasing difficulty and never be able to catch up. 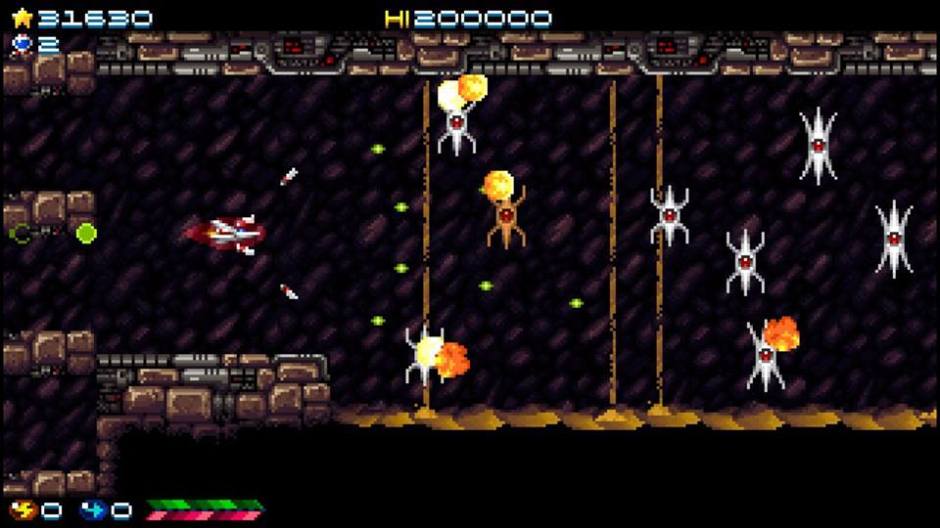 The hardships don’t end there either. In a very Konami/Capcom way, if you manage to beat the game and you missed certain key things along the way, the game happily informs you that you didn’t really win and that you’re going to need to start over and destroy all of Hydorah‘s “seeds” if you want to actually win. So it turns out that the “non-linear progression” that the game lists as a feature, is really kind of pointless because you have to go back and clear out every level, including the optional ones (which are naturally the most difficult ones of all), if you want to really win. Oh well. 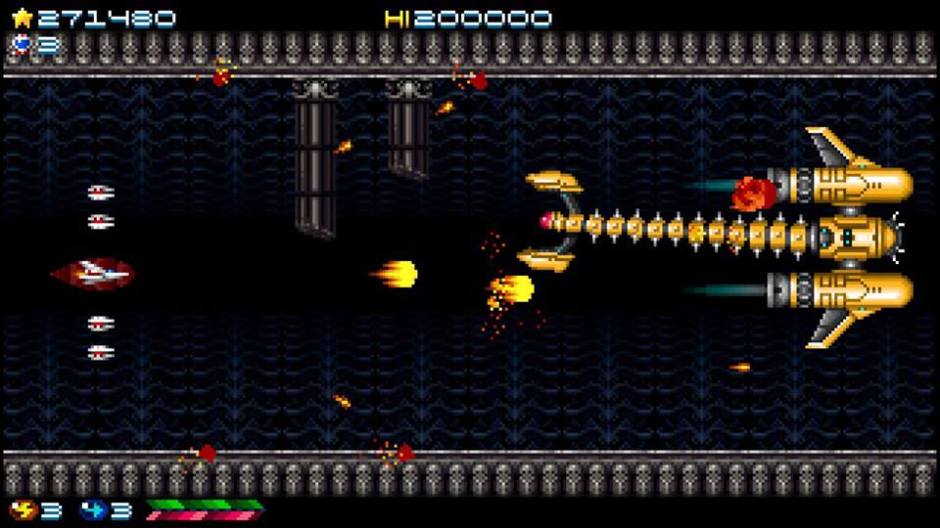 When I first learned this (the hard way), I felt more than a little annoyed, but oddly enough, I found myself immediately jumping right back in and doing it all over again anyway. A challenge had been issued, and even though there were some frustrating times, the game was fun enough that I didn’t want to put it down until I had gotten that proper ending. Luckily, I found that the levels I had already beaten before were nowhere near as bad the second time around, once all the twists and patterns had been burned into my brain. Oh there were still some nasty challenges in there, like those dreaded optional levels and that particularly vicious final stage, but I pushed on and finally showed Hydorah who was boss, and in the end, I didn’t regret any of it.

So if you’re into challenging games and classic shoot-em-ups, then Super Hydorah does indeed have what you’re looking for. Between the solid gameplay and visual design, and the sweet soundtrack, Super Hydorah feels like a lost arcade game from the 80’s that someone found buried underneath a pile of E.T. cartridges somewhere, and I mean that in the best of ways. I know I’ll definitely be moving Loco Malito’s other games up on my to-play list now (which means I should get to them in approximately 1-2 years)!

Super Hydorah is available now for PS4, Xbox One, Vita, and Windows.

Disclosure statement: Review code for Super Hydorah was provided by Abylight Games. A Most Agreeable Pastime operates as an independent site, and all opinions expressed are those of the author.