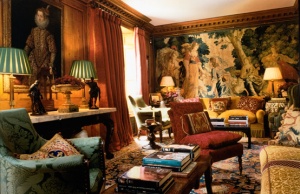 “Welcome to THE DRAWING ROOM, In Which We Meet The Authors Of A Most Agreeable Pastime”

Burdened by the weight of a sumptuous dinner of guinea fowl (topped off with more than a drop of claret), a group of gentlemen make their way wheezily into the room, eventually collapsing in their overstuffed wingback armchairs with a satisfying ‘Harrumph!’

One by one, cigars and brandy in hand, they introduce themselves…

A writer and copy-editor by trade, Lucius often whiles away an evening by putting pen to parchment, but he first began ‘Blogging’ on ‘The Internet’ as a way to document his travels in Japan (see An Englishman in Nyu-Gun). His lifelong interest in video games eventually culminated in a lengthy digest entitled 101 Video Games That Made My Life Slightly Better, and it was while writing this tome that he first fell into the company of Sir Gaulian, a like-minded fellow with a passion for games. Lucius is also the co-author/broadcaster of 101 Films You Should Have Seen… Probably, a podcast and blog dedicated to charting obscure, and not so obscure, films that really shouldn’t have passed you by. Now and then, he can be found writing odds and ends for Eurogamer, Kotaku UK and Skyscanner – among other publications – under the pseudonym ‘Lewis Packwood’. His Digital Portfolio can be found here. Lucius currently resides in Edinburgh.

Economist by day and lesser evil by night, Sir Gaulian discovered the wonders of digital adventuring at a very young age and has seldom looked back. It is rumoured that the earliest evidence of his love affair with video games takes the form of a painting of a two-year old child playing International Soccer for the Commodore 64: but no such artefact has ever been discovered. He is partial to ‘handheld consoles’ of yore, good for those long horse-drawn carriage journeys to town, and while he can be often found staring lovingly into a screen on his latest adventure, you are just as likely to find him in the Drawing Room pondering the business of it all. Sir Gaulian is Australian born and bred. He announced his blogging retirement in February 2017, but promises to return unbidden to The Manor whenever the occasion takes his fancy.

Up in the dim and none-too-clean attic, the slim figure of Professor GreilMercs can be found wandering amongst precarious towers of thick and mouldy tomes, muttering to himself as he checks and notes down obscure stats and video game trivia. A fan of all things Nintendo and retro, the Professor suffers from severe completist tendencies (much to his personal detriment). Amongst other accomplishments, he has played and beaten every mainline Mario, Zelda, and Metroid game, not to mention completed a number of other series such as Mario Kart, WarioWare, Pokemon, Yoshi, and Rhythm Paradise. He has a particular fondness for all things Fire Emblem. The Professor divides his time between pointless debates with fellow manor residents and general tutelage, and his headmaster duties at the Intergalactic Video Game Academy (http://ivgacademy.com/blog), which is located across the pond. There he instructs a variety of students from across the universe, communicating via that most universal of languages: video games.

Every Manor has its dirty little secrets. Deep beneath the aging foundation lie the bones of Baron Richenbaum Fotchenstein III. Some say he expired by means of a tragic wine pressing incident. Others say he met his demise whilst hunting quail, perhaps the victim of a murder most…fowl. Whatever the case, the restless ghost of Richenbaum has taken to roaming the halls after midnight, where it seems to take great pleasure in studying computer science (whatever that is), plastering the walls of the Manor with cryptic writings about strange new worlds beyond the veil of our own, and collecting the monocles of his enemies. Occasionally he even escapes the Manor to practice his arcane rituals in a secluded spot in the woods that few dare venture to (https://virtuanaut.net/). Be not afraid though, Richenbaum seeks only to entertain the living.

Although having recently installed himself comfortably in The Manor, Mr Smythe-Pipton can more often than not be found beavering away in one of the many great halls of learning that occupy our fair land. Pipples, as he is sometimes called, labours to enforce rigour and discipline in the minds of young scholars, deflecting away the temptations of rakishness and insobriety. Of late, he has grown weary of the sheer magnitude of his task and, fearing a full-fledged and perhaps fatal attack of the vapours, has withdrawn to draw succour from life’s simpler pleasures. The watching of television, the reading of quality speculative literature, the pursuit of televisual gaming and the visiting of the cinematograph; these are the things that keep a man’s mind off the cobbles. Sadly, however, his inclinations in these areas are said to be questionable at best, being remarked on by some as positively distasteful. His preference for the Personal Computer is a prime example of his perceived iniquity, but he holds his head high, seeking only to educate his fellow man in the enjoyment and diversion that can be gained from this child of the difference engine. Only time will tell if this noble mission will succeed, and Percival bids you look upon him kindly and without prejudice while he goes about his work.

An attorney by trade, Alexander Connington spends most of his days drafting documents in his office, scouring law reports for old cases at the library, representing clients at court, and thinking up clever ways to subtly insult his rival attorneys while in front of the judge. When not performing his duties as a barrister, however, Alexander escapes from the realities of life and of his hectic career by indulging in video games (and by having a drop of whiskey at the Manor, of course). Alexander enjoys many sorts of games, but his favorites involve fantastical elements such as super-powered killer robots or magical demon-summoning high school students. Anything to take him away from the drudgery of his profession for a few hours.

Several rooms away from The Drawing Room, in the East Wing of The Manor, lies the imposing (and somewhat drafty) gallery. Here we espy a hunched figure dressed in a tattered three-piece suit – a checked red waistcoat can be percieved between the lapels of a faded and paint-spattered black (but now almost grey) jacket. The careworn suit is accessorized with frayed fingerless gloves and an enormous woollen hat in an attempt by the wearer to keep out the infernal cold of the draughty gallery. A small brazier sputters by the lone figure’s side has he hunches over his easel, intently concentrating on his latest masterpiece.

This, dear friend, is the resident artist of the manor and official painter for A Most Agreeable Pastime, Simon Bradbrook.

Simon’s handiwork can be seen in the header at the top of the page, and from time to time his services will be called upon to illustrate various facets of our compendium. In the meantime, if you are interested in drawing upon Simon’s talent for yourself, please send a missive to s_bradbrook at hotmail dot com.