Sir Gaulian’s recent article on ‘crowd combat’ games immediately made me think of Chaos Legion, a long-forgotten PS2 game from Capcom and the first gaming gem to be uncovered in The Cellar. Chaos Legion isn’t a perfect game by any means, but it is a lot of fun, and it’ll be right up your street if you’re a fan of the Dynasty Warriors series.

I first discovered this game a few years ago, when I was teaching in Japan. I’d bought a Japanese PS2 not long after I arrived in the country, but my less-than-perfect Japanese language skills somewhat hampered my ability to play most of the games available. It felt like every other game in my local game shop was an RPG, and although I love RPGs, there’s really not much point in playing them if you don’t know what’s going on. Likewise, text-heavy games like Metal Gear Solid 3 were right out, and there were surprisingly few ‘action’ games available – in particular, hardly any first person shooters were being released in Japan at the time (although I do remember buying Medal of Honor: Rising Sun and feeling distinctly guilty about gunning down hundreds of Japanese soldiers). There were plenty of sports games available – as long as you like baseball – but seeing as I’m neither a big fan of sports games nor of baseball, that didn’t help. And I certainly wasn’t going to start buying dating sims, which seemed to be surprisingly popular.

That didn’t leave me with many options, and my trips to the game shop would often be dispiriting affairs as I gazed at shelf upon shelf of games I either couldn’t or didn’t want to play. On the plus side though, secondhand games were amazingly cheap, and my limited choices also forced me into trying some different genres that I might have normally ignored, and this in turn led me to some absolute classics such as Katamari Damacy and Ring of Red.

Likewise, I doubt I would have normally played Chaos Legion, but I’m very glad I did. 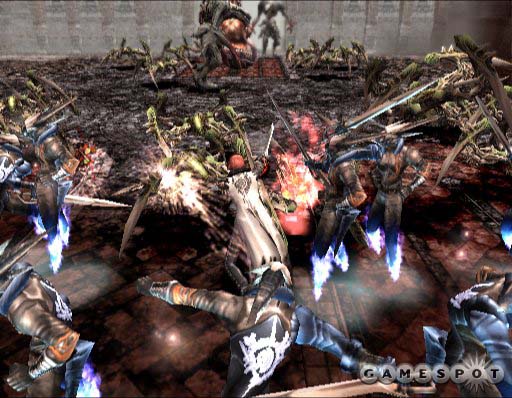 The game basically involves kicking seven shades of crap out of various very stylish-looking demons. And that’s pretty much it frankly: as long as you’re not looking for any great depth, you won’t be disappointed, and seeing as all I was looking for was a game I could play without a Grade 1 qualification in Japanese, it fitted the bill perfectly. Somewhere underneath all the button bushing there’s a plot of sorts, but for the most part it’s utterly impenetrable and, to be honest, completely dispensable. The cut scenes are all very dark and moody, and the main character is so earnestly emo you want to punch him, but none of it makes any sense, and all I could gather on my first playthrough was that Mr Red Hair’s girlfriend had died and he was a bit angry about it. If you want to know what it’s all about, you can read a plot summary here, but all you really need to know is that button is ‘jump’, that button is ‘attack’ and that button summons your demon minions: now go hit stuff.

Speaking of minions, these are definitely one of the things that makes the game stand apart from its crowd combat brethren – i.e. the ability to summon a gang of bruiser demons to do your dirty work for you. Your ‘legion’ certainly adds an extra layer of strategy, as you can only use them for limited amounts of time, plus there are various different paths to upgrade them to suit your playing style and seven different types of minion to choose from. There are definitely no Final Fantasy levels of complexity on show here, but the upgrade system gives you a good sense of progress, and it’s very satisfying when you finally max out one of your legions. 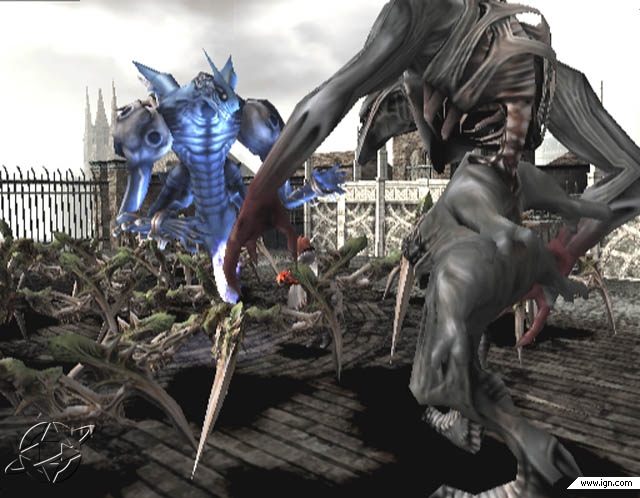 Perhaps the best thing about the game is the graphics. I’m not quite sure how to describe the art style of this game – perhaps Francis Bacon meets Devil May Cry – but it certainly looks wonderful, and despite coming out in 2003, it still looks great today: take a gander at the trailer below to see what I mean. (Thinking about it, some of the enemies vaguely reminded me of the baddies from Phantasy Star Online, but only vaguely.) The environments don’t quite match up to the imagination of the enemy design, but it’s nonetheless a very interesting game to look at.

The big downside of Chaos Legion is the sheer repetitiveness, which is something that marrs the crowd combat genre as a whole. There’s really very little variation in the gameplay from start to finish, and it’s not even a particularly long game. There’s little reason to return to it after the end credits have rolled, which might be irritating if you’d purchased it at full price, but it’s perfectly fine if you’ve just picked it up for a pittance on eBay. Still, what it does, it does well, and as long as you approach it with no expectations other than for a pretty, mildly diverting button basher, it should raise a smile.

[As dictated by Lucius Merriweather.]