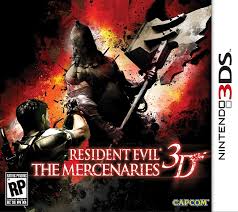 Enough with the negativity.  I am going to try and be positive.

Honestly I am sick of the negativity surrounding the Nintendo 3DS.  Negativity that I am just as guilty of.  When asked by friends whether they should buy one, without hesitation I answer in the negative.  When asked what the best game on the system is, I add a negative slant to my answer by including the caveat “…but you could play that on the N64 or Virtual Console”.  With negativity like this, even the iPhone couldn’t catch a break in the market.

What is even worse is there’s not a whole lot of positivity surrounding the admittedly sparse to this point software line-up.  With the exception of the 3D remake of Ocarina of Time, the reaction from critics to 3DS games have been almost universally mixed, or worse absolutely slammed.  At the front of that line is Capcom’s Resident Evil: Mercenaries.

Things didn’t start off too well for the arcade shooter, with the hullabaloo surrounding the save data on the cartridge.  People were up in arms about the fact that progress could never be deleted from the cartridge – rendering the game pretty much unsellable on the second hand market.  While it is a pretty stealthy and underhanded tactic by Capcom, it certainly doesn’t warrant the ridiculous outcry across the internet that followed – perhaps even having an impact on the overall scores given to the game by critics.  Needless to say the reaction to the game from critics has been on average, luke-warm.

Let me just say, before I go on, I actually think that RE: Mercenaries is one of the better games currently available for the 3DS system.

I am what you could characterise as a bit of a Resident Evil fan.  Not a fanboy – I sure can recognise the crap from the cream – but I have played a hell of a lot Resident Evil since 1996.  Recently though I had all but given up on the franchise after quite frankly thinking that Resident Evil 5 was boring and retarded and failed to complete it after pushing my way through level after level of boring encounters until around the fourth chapter (although it did redeem itself somewhat with the Lost in Nightmare DLC).  Let’s just say my expectations going into RE: The Mercenaries were far from euphoric.  And that’s coming from someone who secretly enjoyed Resident Evil: Gaiden on the Game Boy Color.

Luckily, I was pleasantly surprised and found in the game something that, while may be short on content with regards to a single play through of its main campaign, is certainly not short on fun.  My personal exposure to Mercenaries  is limited to the mode contained in the brilliant Resident Evil 3 for the Playstation, but the Mercenaries arcade time attack  mode has been an incredibly popular aspect of both Resident Evil 4 and 5, pitting the player against the clock to shoot as many dudes as quickly as possible, earning combos for quick chain kills, and earning time extensions by destroying icons located across the maps, or by melee killing enemies.  And Resident Evil: The Mercenaries 3D is just that mode bundled into a full retail release.  I loved the Mercenaries mode in RE3, and I can see exactly why people loved it in RE4 and RE5.  It is just plain fun. 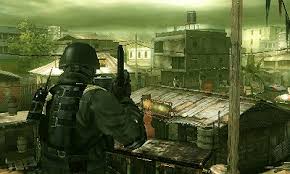 While the game itself is fantastic fun, and lives in my 3DS when I’m travelling or during commutes, there is nothing I can say to defend Capcom over the lack of long term content in the game for those people who will play through the ‘campaign’ and be done with it.  For those people – I can see exactly why there may be a bit of disappointment about, because even a slow one-time play through may last only a matter of three or so hours.  Needless to say if you’re one of those people, certainly don’t pay full price.  But for the rest of us, there is a game that encourages replay, and provides enough incentive to do so.  The perk system certainly kept me coming back just to see what skills I could open up in order to improve my scores.

Even though there may be long term staying power for the more dedicated, it is still questionable as to whether the game is worth paying full retail for. (For the record I only paid $29 AUD).  So despite my continuing enjoyment with the game, it just feels like a game that at its core is just a bit bare bones.  With only eight playable characters and two costumes each (and no Leon), it certainly doesn’t take advantage of the fact that it is, in essence, a  non-canonical entry into the long and storied gaming franchise with a whole stack of cool characters and locations.  When playing the game as Hunk I couldn’t help but think of what could’ve been if Capcom had’ve taken the vs Capcom  approach to the game – what if they included Tofu, Brad Vickers or even Regina from Dino Crisis?  It really could’ve been a really great Capcom fan service in the same way that Smash Brothers  is for Nintendo.  And it certainly would’ve added a whole lot of variety to a tried and tested game design.  Needless to say I have been having dreams of running through RE:Mercenaries’ levels as Mega Man.

As it stands though, RE: The Mercenaries 3D isn’t a terrible game.    In fact its incredibly competent at what it does.  But I can’t help but be disappointed – not for what it is, but rather for what its not and particularly at full retail price.  It just seems to be a product of a bygone era where players made their own replayability. There is no doubt that it is a ‘cash-in’ for Capcom – in this case however they’re lucky that they have kind of pulled it off and in turn released a game that is likely to stay in the 3DS of the more committed for a long time to come.  Just don’t go in expecting too much and you’ll come out satisfied.