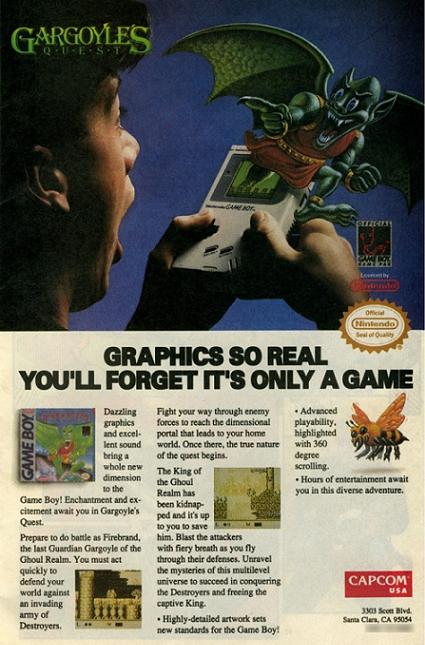 I love portable gaming.  The sheer audacity for Capcom to claim that the graphics are ‘So Real You’ll Forget It’s Only A Game‘ is nothing short of hilarious.  Of course back in 1990, Gargoyle’s Quest probably was the best looking game to grace a handheld, and to put it in context, it was a fantastically attractive game running on a culmination of technology from the 1970s and 1980s.   But what the advertisement doesn’t tell you is that Gargoyle’s Quest, as a game, was probably the most ambitious Game boy title of the day, and even to this day is probably one of the best games for the platform.

And that is simply what I love about portable consoles – the concessions that have to be made in order to deliver a quality product that appeals to whatever subset of people the developer is going for.  What I love even more is as the Game Boy (in particular) matured it tried, man did it try, to emulate what was happening one the ever-more-powerful home consoles.  And don’t even mention the fact that the Game Boy had only two buttons that were feasibly usable for game play.  Of course, that didn’t stop them from trying to implement control schemes that heavily relied on the Select Button, with one example coming to mind being the Game Boy version of NBA Jam Tournament Edition, which used the select button for the almost mandatory Turbo function.  This didn’t stop me playing more of the game than I care to think about – I just had to utilise an early version of the claw that PSP Monster Hunter fans are so familiar with. 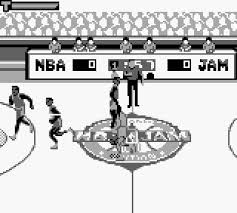 There were reasons for trying to shoehorn these games onto a system that was clearly not designed for it though.  Back in the 1990s, the arcade was king, and the biggest deal in the world was that fateful day when those arcade classics came to home consoles for the first time.  The launch of Mortal Kombat on every console known to man at the time was a big deal, with September 13 1993 being dubbed Mortal Monday in an incredibly intelligent marketing campaign, accompanied by full page adverts in most gaming publications.

And the hype was worth it.  the console versions, for the most part, lived up to what was expected from an arcade port at the time, and delivered the game play that made the arcade version so popular (without the Fatalities on the Super Nintendo, that is).  Unfortunately, the Game Boy version was a shadow of its former self, delivering a game with almost unplayable levels of controller input lag, a shrunken roster, and game play that more resembled a Tiger Electronics handheld game than anything that had been seen on the Game Boy to date.  Looking at a screenshot (as below), you can’t help but see the promise though, and admire what the development team at Probe Entertainment attempted. 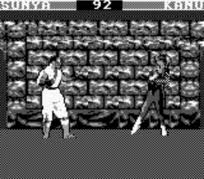 Promise that was largely reached with the follow up entry in the series, Mortal Kombat II, which abandoned any hopes of emulating what the bigger home consoles could do, in favour of just making a good old fashioned fast-paced portable brawler.  The decision to develop the game on the system’s own merits reaped rewards, and although the graphics varied greatly from other console versions and the roster was again shrunken down from the arcades, the game was to date the best 2D fighter on the market for Nintendo’s humble handheld.  Unfortunately the third game in the series took a massive step backwards with Software Creations cramming an awful lot into the Game Boy cartridge, at the expense of game play.  Admirable, but perhaps a little too ambitious.

Of course Midway weren’t the only company to have a go at giving gamers on the go that beat ’em up they craved.  In 1996, Atari Games entered the ring vying for some of that arcade beat ’em up conversion money that Capcom and Midway had been raving about.  The game was Primal Rage, launched in the wake of Jurassic Park fever, and although the game in hindsight wasn’t that great, at the time it was the latest thing that had kids lining up in droves at the local arcade to play.  Not only did it look absolutely amazing with its stop motion animation, but in terms of sheer blood and visceral violence, it went toe-to-toe with the unbeatable behemoth Mortal Kombat II.  With this in mind it was a no-brainer to bring it to console audiences, and development was started across all major platforms, which by this stage included the next generation of hardware.  Obviously seeing the profitability of other genre leaders porting to handhelds, Atari commissioned Probe Software (who were handling most, if not all of the console ports) to handle the Game Boy and Game Gear versions of the game.  And the results, at least on the Game Boy version, weren’t too far off the mark.  The game looked and played the part,   and was a worthy version for those who didn’t have access to any home consoles at the time.  And while there were omissions – one character, Vertigo, was missing from this version – it wasn’t enough to render it entirely unidentifiable from its brethren on other systems.  In fact a Game Boy owner could consider that they had experienced Primal Rage even if they had only ever played the portable version.

And for these achievements, I have nothing but absolute admiration for these developers who worked so hard to cram so much into the Game Boy.  By the end of its life cycle, it had seen entries in most major 2D fighter series of the day, including Street Fighter II (which played more like Super Street Fighter II) and Killer Instinct, and even a few attempts at matching what developers were achieving on the Super Nintendo, including the illustrious Donkey Kong Country experience through its sister series Donkey Kong Land, which in its lifetime saw three games that mimicked the respective entries on the SNES.  While these achievements aren’t that impressive, in particular when compared to what is being achieved these days on the 3DS and the Vita, within the confines of Nintendo’s little green- and grey-screened beast these games present nothing short of genius from the programmers working on them. 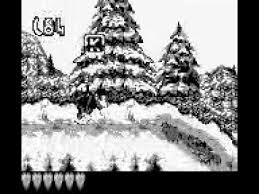