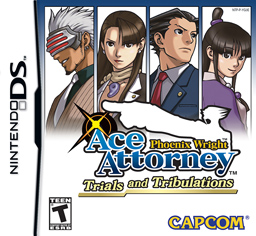 There really is very little to the Phoenix Wright games, but I can’t get enough of them. In essence the gameplay basically boils down to tapping through screen after screen of dialogue for about 25 hours, occasionally interspersed with the odd section where you’re required to make some leap of logic, but really it’s more like an interactive novel than a game. And that’s no bad thing: as I pointed out in my last post, big RPGs or action games aren’t really suited for handheld gaming, but a bit of light reading is exactly what I want when I’m heading somewhere on the bus.

Anyway, going back to Phoenix Wright, the third entry in the series turned out to be a pretty satisfying game in that it ties up a lot of the loose ends from the previous two entries, as well as providing a fitting end to the saga of the Fey clan. Not only that, you also get to play as Mia Fey and Miles Edgeworth in a couple of sections, which provides a nice change from stepping into the shoes of the blue-suited one. I won’t bother going into all of the plot details here, but suffice to say there are more outrageously complicated murder trials involving needlessly convoluted set-ups and deviously complicated backstorys, culminating in one uber-trial that seems to involve pretty much every character and plot point from the whole series. As I said, a satisfying ending.

It’s great to see a few more intriguing and bizarre characters introduced as well – Godot, the coffee-swilling masked prosecutor, is a particularly brilliant addition. I was also surprised by how attached to the main characters I’d become by the end of the third game, which I think is testament to the generally excellent writing and translation throughout the series. I spotted a few spelling errors along the way, but the dialogue made me laugh out loud on many occasions, and it’s certainly never boring. I still have a bugbear about the frankly bizarre decision to ‘set’ the game in America when all of the locations and characters are so obviously Japanese (see my previous review), but it’s easy enough to ignore this strange filip for most of the game.

All in all I had a blast with Phoenix Wright 3, and I can’t wait to get stuck into the sequel, Apollo Justice: Ace Attorney. Here’s hoping Ace Attorney 5 makes it over to the West sometime soon as well…

[As cross-examined by Justice Lucius Merriweather.]