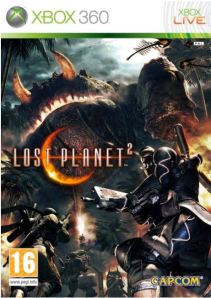 I’m a big fan of the original Lost Planet, and I picked up Lost Planet 2 a few months back in the hope of more of the familar giant-monster bashing, robot thrashing and emo Japanese plotting involving people with strange hairstyles. Sadly, it turned out to be rubbish.

I was aware that the sequel had been redesigned to be more of an online co-op game, but I wasn’t aware just how far the designers had gone down this route, to the point where I couldn’t actually work out how to start a single-player game from the title screen. Regular readers will probably be aware that I’m not a huge fan of online gaming, and that my Xbox Live Gold membership expired quite some time ago after I’d spent a grand total of an hour and a half online in the space of a year. Call me old fashioned, but I’m not a huge fan of being gunned down by potty-mouthed teenagers who subsequently delight in teabagging my corpse.

Anyway, eventually I worked out how to start a solo game (I think it involved selecting something obtuse like ‘start new session’), and soon I was gunning down big glowy creatures just like in the first game, although this time I had a load of computer-controlled allies helping me out. I didn’t particularly want them to help out, but there they were anyway.

On level 2 though, things took a turn for the worse. For some reason, I was now shooting oddly clothed humans instead of big glowy creatures. Apparently my band of oddly clothed humans had some sort of beef with these other oddly clothed humans, although I have no idea as to what that beef was. Certainly, it seemed to stray from the series template of shooting big glowy creatures. And also it took place in a jungle right next to a frozen tundra, which was a bit odd. It sort of reminded me of the level select screen on Lemmings 2, in which a single, dartboard-esque island contained landscapes ranging from ‘beach to ‘space’.

Eventually some big glowy creatures turned up, and my AI team mates killed them for me. I didn’t really want them to, but there you go.

Then on level 3 it all came crashing down. The big glowy creatures were conspicuous by their absence, and the entire level consisted of shooting oddly clothed humans for some reason I never quite gathered. I got told to protect some bit of switch thing. It all started to feel a bit like protecting a base in Call of Duty. But I didn’t want it to be like Call of Duty, I wanted it to be like Lost Planet. You know, with big glowy creatures. It became very dull. My unwanted team mates didn’t seem to be doing a very good job of protecting the switch thing, so the ‘enemy’ would often switch it back to a direction I didn’t want them to switch it to. Then I’d have to switch it back again. This continued for quite a while.

After some time I finished the level. I hovered over the ‘continue to next level’ button for a short while, but the thought of playing any more of this awful rubbish filled me with dread. I ejected the disc instead and put it straight on eBay.

How is it possible to screw up a game about shooting big glowy creatures so badly?

[Penned in ennui by Lucius Merriweather.]