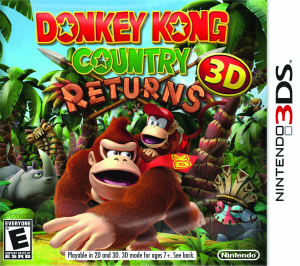 I really didn’t get on with Donkey Kong Country Returns 3D – so much so that I sold it when I was just halfway through the second world. I figured I’d prefer that my copy gave someone else some pleasure rather than simply causing me consternation.

I had the original Donkey Kong Country on the SNES when I was a kid, and I absolutely loved it. I remember it being fairly easy, but it was fun to play, and the CD that came with it was brilliant – I have a vague feeling it had ‘Creep’ by Radiohead on it, but I’m not entirely sure. In fact, now I come to think of it, I’m not entirely sure why they bothered to bundle a game with a CD of songs that are entirely unrelated to it – but then again it was the nineties, and companies were doing stuff like that all of the time. Every other game seemed to come with a novel, or a sticker set or, at the very least, a tiny poster. Now we’re lucky if we get an instruction manual… although to be honest I’m not that bothered, as most of the things I just mentioned were utterly bobbins anyway.

Except the CD. That was ace. I think it might have had the Inspiral Carpets on it as well…

Anyway, I missed out on Donkey Kong Country Returns when it was triumphantly released on the Wii a while back, so when the retweaked 3DS version emerged a couple of months ago, I decided to snap it up. My first impressions were good – it captures the feel of the old SNES game well, but the graphics are obviously a lot better. In particular, the 3D effect works brilliantly, especially on one particular level where cannons are being fired at you from the background. The designers have also made it a lot more challenging that the original, which is no bad thing. Although they might have gone a bit too far in that area – there are a few irritating difficulty spikes, even in the few levels I played, and the restart points are obscenely far apart.

The biggest problem I had with the game though was that it’s just so dull. I admit I haven’t played that many platform games since their heyday in the nineties, but judging by this game nothing has changed whatsoever – it’s still the usual trudge from left to right, collecting various random things along the way (I couldn’t actually work out what half of the things I was collecting were actually for – it may have been revealed in time, but I certainly didn’t feel an urgency to collect any of them). Then there’s a shop, an end of world boss, life-giving hearts… you know the drill, you’ve played this game a million times before.

But it doesn’t have to be this way – the evolving Mario games have shown that platform games can still be exciting and relevant, and that the genre doesn’t always have to fall back on cliches. Clearly this game didn’t get that memo.

Don’t get me wrong, it’s not a bad game – I’m sure little kids will love it – it’s just that I found it terribly, terribly boring. So much so that I gave it the old heave-ho with nary a thought.