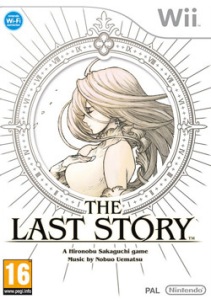 Last week we said farewell to the Wii with a list of our top ten games on the console, and right there in seventh place was this little gem: The Last Story. It snuck out for release in Europe in August 2012, right before the launch of the Wii U, but it turned out to be one of the best games to come out on Nintendo’s wonderful white box.

It was directed by Hironobu Sakaguchi, the creator of the Final Fantasy series (Last Story, Final Fantasy, geddit?), and although he’s produced many games over the years, this is the first game he’s directed since Final Fantasy V. Visually, the game shares quite a few similarities with FF – notably the elaborate costumes and Cloud-a-like hero Zael – but in other ways it’s very different. The fighting is a blend of real-time hacking and slashing and careful strategy  – and it works surprisingly well. Running towards a monster will see you automatically start swiping at it with your sword, but you can block or dodge using the B and A buttons, respectively. As you attack you fill up a meter, and when it’s full you can pause the game and assign various magical and physical attacks to each member of your party, which can really turn the tide in battle. It works brilliantly, and more layers of complexity are added the further you get into the game, meaning it never gets dull.

Probably the thing that surprised me most about The Last Story is that all of the characters have British accents – and bizarrely, the lead character is voiced by Jack Ryder off of EastEnders. I can’t remember the last game I played with all-British voice actors – usually there’s at least one character with a mid-Atlantic accent drawl. But no, here we have Northern, Welsh, Cornish, Scottish, Irish and London accents, with not a single American in sight (well, earshot). I don’t have anything against American accents in games, but it’s just so refreshing to play something where everyone speaks in accents I’m used to.

Story-wise it’s fairly generic, although at least it’s not about a young boy leaving his tranquil village in response to a great tragedy. Still, it’s not hugely more original than that, and there were some irritating gaps in the back-stories of your companions – some of them have their past fleshed out slightly, but Syrenne and Lowell may as well have not existed before the game began. But the game whips along at a fair old pace, particularly during the second half when you’re hit by revelation after revelation. I also liked the decision to keep the game world fairly focused – for almost all of the game you’re in one location, which helps to keep things focused where other games submit to ‘world bloat’, trying to cram in too many places and spreading the game world too thinly as a result.

All in all it’s a really fun game, and a must if you’re a fan of Japanese RPGs. The Wii saw a fantastic triumvirate of JRPGs released in its dying days – The Last Story, Xenoblade Chronicles and Pandora’s Tower – and I’m determined to complete the set by playing the other two. Watch this space…

[Penned in a British accent by Lucius Merriweather.]