There was probably no worse year for developer Attention to Detail and publisher Psygnosis to release its high speed gravity-defying racer Rollcage.  Released in the same year as arguably the best game in the Wipeout series, Wipeout 3, Rollcage never really stood a chance at market.  Which is a shame really because it was a brilliantly fast arcade racer that deserved people’s attention.

Wipeout’s influence on the game is obvious before you even hit the track.  You select from a series of ultra modern cars from ultra modern teams with ultra modern logos.  Turn the volume up and you’ll hear a soundtrack full of well known dance artists with thumping bass and looping samples.  At the turn of the century this was clearly the vision of the racetrack of the future and perhaps the formula developers and publishers thought would help sell their futuristic racers. 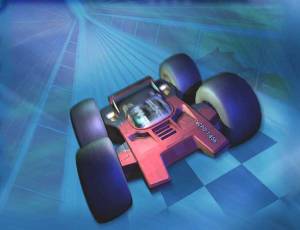 Once you hit the track though you’ll notice one pretty major difference from the Wipeout games: that the vehicles in Rollcage have wheels.  “But you said it was a gravity-defying racer” I hear you say.  I did and that is one of the game’s unique features.  Rollcage’s vehicles are the real stars of the show because while they are tethered to the ground they are able to stick to and drive on walls and roofs. The ability for them to flip and still have their wheels maintain contact with the ground meant that even if you lost grip the race would continue, often with little to no speed or time penalty.  And that was a wise design decision because most of Rollcage’s appeal was how unbelievably fast it was.  The detailed futuristic scenery flew by as your car reached top speed, boosting off of genre standard boost pads one after another, so while it’s not as fast as Wipeout, it is still by any standard a ridiculously fast racer.

But that’s just the problem: it’s not as good as Wipeout.  All of the ingredients were there – great tracks, fast cars, good graphics, well balanced weaponary and an excellent sense of speed.  But it was never going to match the polish and finely tuned action seen in Psygnosis’ other fast futuristic racer, and regardless of how great it was, it simply didn’t feature anti-grav craft by Feisar.  It’s not Wipeout, no, but but i’ll be damned if it it made a bloody good push at being just as good.

A sequel Rollcage Stage 2 was released in 2000 and was another excellent futuristic racer.  Unbelievably the original official site is still live after 13 years. 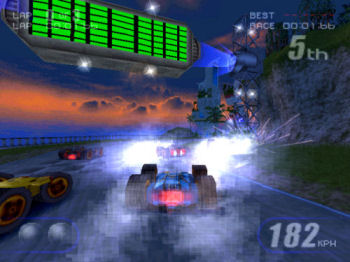 Have a favourite game from 1999?  Tell us in the comments below.  Don’t forget to come back soon for the next game in our countdown.  Miss a year?  Catch up below.