Fighting games have come to represent some of the craziest examples of gaming canon around.  In the 90’s the stalwarts of the arcade scene were injecting those crisp arcade screens with some of the most bizarre yet beautiful sprites to grace the relatively young industry.  For every Dhalsim there was a Kintaro.  It was a weird time for the industry, but one that so many of us remember so fondly.But progress – for a period at least – left those days in the trail of polygons.

Tekken and Virtua Fighter ushered in an era of ultra pretty and (at the time) complicated fighting that pulled people away from those long Mortal Kombat 3 lines and wowed them with the eye-catching visuals pushed by Namco’s Arcade System 11 and SEGA’s Model 1 boards respectively.  And it wasn’t long until these were the main attraction at arcades, as the traditional fighter was pushed to the back of the floor, making way for the newest and hippest 3D fighters.  If these games didn’t kill the 2D fighter, they certainly left them wounded and bleeding, ready for the Dreamcast’s Soulcalibur to lay the final crushing blow when it was released to a blazing hot reception when it released in 1998.

While I kept with the old guard, it was hard to not look at what these games were doing, both graphically and in terms of offering an entirely new fighting experience.  The characters moved with such fluidity – unlike anything else I’d ever seen – and the graphics for the time were what we all imagined we’d be playing in the future.  It was the future and console manufacturers knew it, with 3D fighters featuring prominently in the launches of both the SEGA Saturn and the Sony Playstation, with Virtua Fighter and Battle Arena Toshinden respectively vying to capture the imagination of would be 32-bit console owners.  But the real competitor to Virtua Fighter, as it had proven in the arcades, didn’t come to Sony’s console until later in 1995, with the arrival of Namco’s Tekken.  And it was definitely worth the wait.

The first time I played the first Tekken way back on the Playstation I was taken aback a little bit by the roster of characters.  I shouldn’t have, because in a lot of ways it resembled the cast of characters pulled together by SEGA for its Virtua Fighter series.  But after years of larger than life sprites seen in Capcom, Midway and SNK’s offerings, Tekken’s band of ragtag brawlers came off as a little tame.

Well nearly tame.  You see amongst all the gravity-defying hair and headbands, I found my eyes drawn to a strange character – an out of place portrait – second from the far left of the – now admittedly small – roster.  “What is he” I wondered.  “A monster?”.  His eyes glowed red and his almost slasher flick-esque would have caused nightmares in some – admittedly only to those with a weak disposition.

That character was Yoshimitsu, a character so symbolic of Namco’s then newly-established fighting pedigree that he found himself jumping directly from the Tekken series, to the company’s wildly popular weapons-based Soulcalibur series, albeit in name only.    Before the increase in popularity of Jin Kazama, who first featured in Tekken 3, Yoshimitsu for a lot of people embodied not just the spirit of Tekken, but for some the spirit of 3D fighting games.  He may have been the monster among men, but his otherworldly presence and Namco’s seeming self awareness of the ludicrous nature of his character – including being the only character brandishing a weapon – made him something we could all relate to in order to bridge the gap from what we were used to from what 2D fighting games had become.  Yoshimitsu may not be the weirdest character in the Tekken roster these days, but by 1995 standards, he was positively freakish.

And as time went on Tekken – much like every other fighting game series – embraced its inner weirdness in line with what every other fighting game franchise was doing at the time.  1997’s Bloody Roar, for example, had men turning into animals.  But with every step its competitors made toward regaining the sense of craziness lost in the transition to 3D, Tekken’s designers were taking two.  By Tekken 3 we had drunken Doctors and Panda Bears, and by Tekken 5 we had Devil incarnates and Angels.  Seeing a man fly out of an erupting volcano is no uncommon sight in a series that, at one point at least, could have been considered at least a little bit grounded in reality.  Tekken had found its groove and wasn’t going to let up until it had wrung every ounce of insanity out of the creative team at Namco’s development team.

But before all of that craziness, for a brief moment, we had Yoshimitsu.  A single grain of craziness among a game that took itself rather seriously.  He defied the rules by bringing a sword to a boxing match, moved more like a monster than like a man, and likely gave his opponents nightmares well after knockout. He was Yoshimitsu – the man that arguably single-handedly kept the fighting game genre crazy. 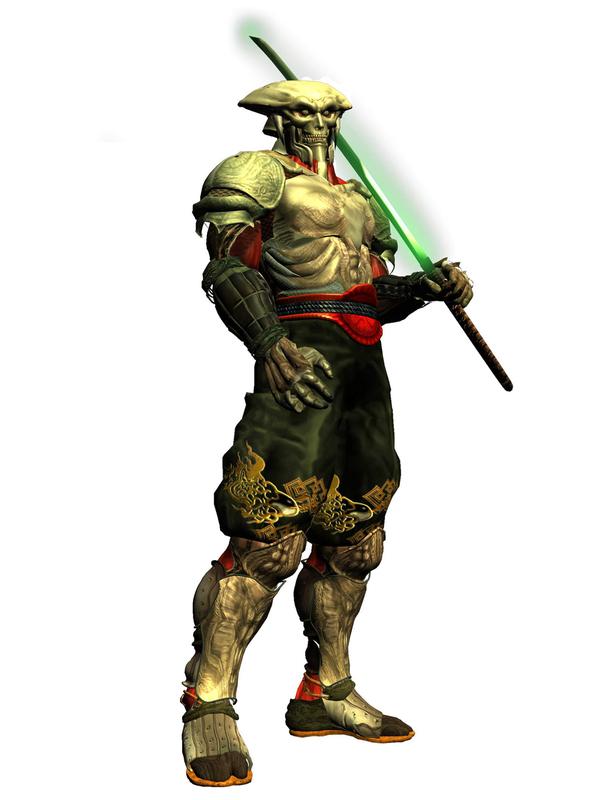