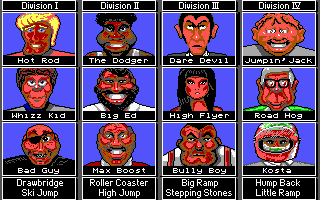 It makes sense to start where it all began for me as a race fan – with what is to this day still one of the most purely entertaining racing games I think i’ve ever played.  I cannot understate how important Stunt Car Racer is both as an influence on my taste in video games, and as a game in its own right.

Pitching you against some clearly late 80’s European designed opponents, Stunt Car Racer has you donning on a helmet, stepping int your open-bodied hot-rod stunt car, and driving at speed around raised and very barrierless tracks.  It is the very definition of extreme driving, where any wrong turn, over acceleration, or failed overtake, can send you careening off the track in need of a crane lift.  From the constantly changing and often severe cant of the track, to the drawbridges and jumps, Stunt Car Racer’s tracks aren’t just there for you to race opponents on, in many ways they are the opponent.  There have been so many extreme racing games since, but for mine, none have managed to come close to the exhilaration of the ‘real’ risks that Stunt Car Racer throws your way at every moment of every race.

And part of that is because of its relatively reserved and strategic approach to racing.  Sure it’s fast, but Stunt Car Racer offers so much more than your average racer did at the time, in some ways being more akin to a modern racer than a product of its time.   I’ve always looked at racing games as, in some ways, puzzle games with a bit of extra testosterone thrown in for good measure.  Every corner is in many ways a puzzle in and of itself and the way you navigate your way through the pack, throttling on the accelerator and feathering on the brake, is a very delicate and finely balanced solution.  Stunt Car Racer embodies this sentiment in so many ways, from the intricately and near-perfectly designed twists and turns of the track, to the fine-tuned controls, winning a race (and even staying on track) always felt like being on a knife-edge.

And it was absolutely perfect.  Throwing your car around at speed always has an inherent danger, and every time you reach for the boost button, its always with a sense of trepidation – pull it off and you’ll romp it home, but push too hard and you’ll be a pile of smoking twisted metal.  And the game isn’t exactly shy about warning you about just how fine of a line you walk, with every rough landing shown visually by a crack or (worse) hole in your car’s chassis bordering the screen.  But it is this continual tension that makes the game what it is, an exhilarating flame-spewing tight-rope walk.

In many ways, as someone who didn’t own a Nintendo Entertainment System, Stunt Car Racer is my Excitebike –  less about pure speed than most racers, opting instead for a unique focus on navigating the tracks and maneuvering your vehicle around uneven and angled track designs. Developer Microstyle did the unimaginable at the time when it was released a technical 3D tour de force that ran smoothly and looked great, even on the less powerful home computers of the time, but who could’ve imagined just how enduring its originality would be so as to still be a one-of-a-kind racing game 31 years later.

Play Stunt Car Racer?  Let me know in the comments and come back tomorrow for #30 in the countdown!