Top down scrolling racing games in theory just should not work, but during the 16-bit home computer era they were a dime a dozen, and more often than not succeeded in almost every respect.  Games like Nitro somehow, despite what you would think are the fundamental principles of good game design such as seeing the track ahead, throw a faecal matter in theory’s face and race to the front of the video game pack.

The closest point of comparison for the game, while perhaps perfect, is that Nitro is a bit like Midnight Club if a nuclear bomb was dropped on its cities.  While the ‘tracks’ aren’t necessarily as open as Midnight Club’s, there is a certain level of freedom afforded to the player in getting from A to B, and in many cases going off the beaten track will prove worth it being plenty of pickups and bonuses scattered around the post apocalyptic world your racer inhabits.    The open-ish tracks are a cool feature that gave the game an entirely different feel to other games of its type.  But Nitro’s coolest feature is almost certainly one of its biggest curses, and while Nitro’s relatively open tracks do add a nice level of freedom to race how you want to, there will be times where you get lost or stuck in dead-end roads. This is definitely at its worst during the later night levels, with your path illuminated by a small patch of light emanating from your headlights.  It’s a cool effect, and it the thing I definitely remember most about Nitro, but darkness definitely isn’t when the game is at its best.  Luckily the tracks are so short (and CPU racers so slow) that even in the night tracks getting lost it won’t have too big of an impact on your race position.  But it is more frustrating than needs to be a lot of the time, even if its not game-breaking.  Nitro in a lot of ways is brilliant in spite of itself.

Of course, like a lot of the racing games being smashed out by developers in the Amiga era, the soundtrack was absolutely brilliant.  Sounding like a cross between Pop Will Eat Itself and Daft Punk, the semi-industrial soundtrack – like the design of its characters and pervasive ‘nuclear apocalypse’ theme – places Nitro firmly in the early 1990’s.  Did I mention that Nitro (like Badlands) takes place is a dystopian post-nuclear world?  Well it does, and as you progress through the game, the tracks will take place in more and more irradiated locations, complete with green ooze streaming out of destroyed buildings, and peace signs scrawled on the pavement.  Thanks for the reminder that we were in the midst of the cold war, guys.

Robotic Eastwood?  Cyborg Rambo? AI Bond?  What is there not to love about Nitro!  Leave your memories in the comments section, and be sure to check out past games in the countdown below! 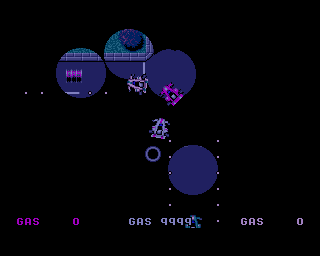