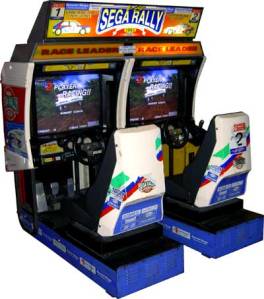 Daytona USA was the last great game changer for arcades. It was the first time i’d ever seen a machine take $2 coins per play, and the last time I ever saw  lines so long that time limits were enforced by arcade owners to prevent them from snaking out onto the pavement. In fact it is such an enduring classic that even now, 20 years on, you’re unlikely to spot a Daytona USA machine with an empty seat regularly, and the draw of a four-machine link-up is still an incredibly attractive proposition if you come across one with a group of mates. For a lot of us Daytona was the last great game from the era where arcades were king.

But while Daytona hit the market hardest, it is actually Sega Rally that has my heart as the greatest sit-in arcade machine of its time.  It looked every bit as beautiful as AM2’s classic, and at its core was much the same game, but there was a satisfaction in mastering Rally’s looser handling that for me makes it hit sit and shoulders above anything else.  And like most arcade games of the time, Sega Rally was at its best when you had a shit-talking mate sitting in the driver’s seat next to you.  Whether real or imagined, the more subtle and nuanced skill required made for some of the most frantic races I’ve probably ever experienced in races, which in turn, made for some of the greatest multiplayer banter I’ve had.  Whole trips back to my hometown of Adelaide were organised around plans to play the Sega Rally two-seater that had been sitting in the same Fish and Chip shop for as long as I can remember.

Anyone who grew up in a time where arcades were seemingly on every corner knows that arcades really were about the people around you.  For anyone who missed the phenomenon (i’m sorry), if you get hold of a mate and can track down a SEGA Rally machine, you can relive what is still for mine probably the pinnacle of the arcade experience (minus the weird smell and flashing lights).  And while the Saturn ports did an absolutely stellar job of bringing the game home, it is very tangible feel and sound of slamming on the pedals, turning the wheel and shifting gears, that makes the cabinet still the definitive way to play Sega’s masterpiece. While it is in part the persistent back and forth  rivalries I had with friends playing Sega Rally that in part has in many ways shaped my fondness for it, it cannot be denied that underneath all of those high subjective and incidental personal experiences, is a thoroughly brilliant rally racer that is as good now as it was in 1994.  Give or take a few pixels.

Finnnnish! Share your Sega Rally memories with us in the comments below, and make sure to catch up with prior entries in the countdown below! 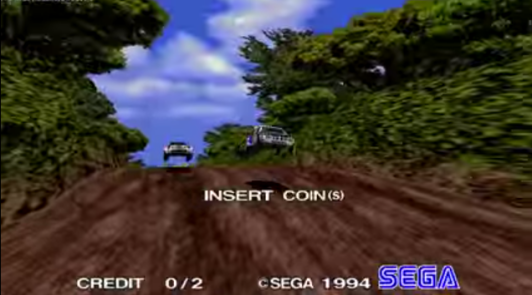