It was after much de

liberation that I omitted the original Micro Machines, released in 1991, from the countdown. After all it is one of the genre’s greats, living in my memory as one of the defining games of its generation and as a nice little throwback to the eponymous toys of my childhood.

The truth is I could put every entry in the Micro Machines series in this countdown (yes even the Atari effort in 2001) and not be drawing too long of a bow to explain why they’re important and genre-defining efforts. The concept of driving miniature vehicles through every-day environments is a great one, and add to that the masterful execution of the cars’ handling and track design, it isn’t hard to see where peoples’ reverence for the series comes from. It may be partly grounded in nostalgia for our collective childhoods, but for the most part the Micro Machines games are simply just seriously, SERIOUSLY good racing games.

But if I had to choose one, just one, from the series that started way back in 1991, it’d be Micro Machines V3.  While perhaps not a dramatic departure from the series, the V3 took advantage of the brand-spanking new(ish) 32-bit – and later 64-bit – hardware, to deliver what are some of if not the most iconic tracks in the series history.  It is a game that nails attention to detail in such a way that the game’s detailed environments inspired imagination, bringing the idea of racing these bit-sized beasts across incredibly familiar locales to life.

And most of the classics made the transition to the new game, from the classic kitchen table to the pool table tracks, they were largely all there (no bathtubs sadly).  But the then new hardware allowed developer Codemasters to experiment a bit creatively, having environments that were more varied, and tracks that were more complex and ambitious – one of the lab tracks has you shrunken down and looking through a microscope and you race through bacteria in a Petri dish.  My favourite though if only for its ambiance, was the classy restaurant environment and tracks, complete with ambient piano playing and the sound of diners chattering in one great big inaudible murmur as they clink their cutlery and wine glasses.  It is the small things, the little details that give life to these real life environments, which in every way embodies the incredible creativity and attention-to-detail that went into making V3 the classic that it was.

The Playstation 1 era was undeniably one of the true golden ages of video games, and it was games like Micro Machines V3 that encapsulates the creativity and ambition that made it so.  While the game has lost some of its luster just by the passing of time and advancements in hardware since its release, it has lost absolutely none of its charms, and for me was the poster child for Playstation 3’s backwards compatibility, sitting never more than an arm’s length away from the television ready to boot up for a lap around the garden.  There aren’t many games that can be considered truly timeless, but Micro Machines V3 may just be one of those rare games that in another 17 years time, is still as infinitely playable and enjoyable as it was when it was released.

Have Micro Machines memories?  Tell us about them in the comments, and be sure to look back at #31-#22 to see what else made the great racing game countdown cut! 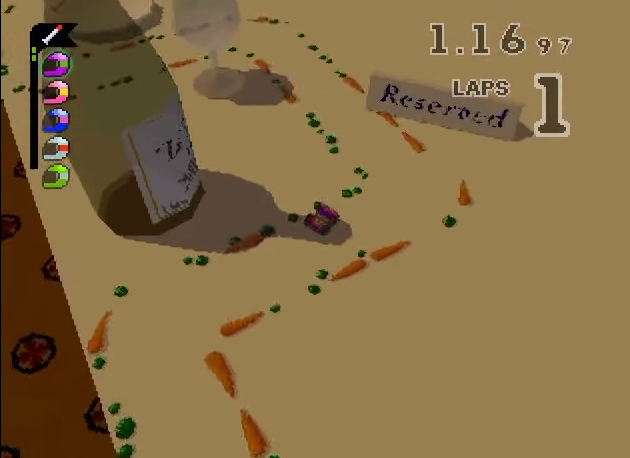