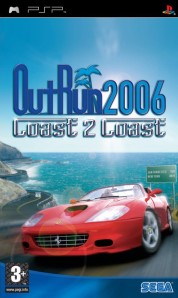 You’ve got to admire Sega for having the testes to make a direct sequel to an arcade game from the 80’s.  Sure, there were spin-offs and pseudo sequels between the two, but none of them really captured the magic of the original Outrun. So in 2003, almost in an act of defiant redemption, Sega basically came out fighting and announced that: “sod it, we’re making Outrun 2, and it’s going to be the best yet”. After years of laying dormant in Sega’s storied history, they were out to prove they still had the chops, that they were still stood among the pack vying to be kings of arcade racing games.

And by Jove were they right.  Sega still had some serious racing chops.

Until the release of its sequel, Outrun 2006: Coast to Coast, it stood as the best entry in the series, and a return to simplistic time-based arcade racing at a time where Burnout 3: Takedown was blowing everything wide open with its take on the genre. But despite the four wheels, there are few points of comparison between the two game, and if anything Outrun 2006: Coast 2 Coast and its predecessor proved that the fundamentals of good game design haven’t changed, even if the new stalwarts of the industry were mixing things up with their offerings.  Gratefully, Sega stayed true to the series’ roots, and while  Outrun 2 may have had a few new modes and some objective based missions, at its core Outrun 2 is the game Sega probably would’ve made in 1988 if it had the horsepower modern machines sport available to it.

The game is great no matter how you play it, with the Xbox version probably being the best way to play it, I have a special place in my heart for the brilliant down port to the Playstation Portable, something I wrote about last year:

Outrun 2 is perhaps the perfect video game.  Bite-sized chunks of fast, simple driving around winding courses, all against the clock.  It was excellent in the arcade, it was excellent on the Xbox a few years later, but it was perhaps its best in its portable form on the Playstation Portable.  From a technical standpoint it was mind-blowing that the Sony’s portable could be home to the game, and while it obviously wasn’t as accomplished as other versions of the game, it moved at a cracking pace and looked bloody fantastic in the process.  Part of Outrun’s appeal is its simplicity and for that reason it was a perfect fit for the portable platform.

Portable or not, though, we should all applaud Sega bringing Outrun back onto the scene without feeling the need to reinvent the wheel.  Imagine if Nintendo came out and announced a Wrecking Crew 2.  Or if the Bitmap Brothers came out with Speedball 3: Explosive Lords.  Whether in fear of disappointing old fans, or underwhelming new ones, a direct sequel to a beloved and age-old franchise is the sort of gutsy move you just don’t see from the old guard all too often.   But Sega’s bold move was a masterstroke that brought to the forefront its storied history as a developer of excellent racing games, and showed that there may not be that much separating what makes a new game great, and what makes an old one a classic.  To paraphrase myself from last year, if you’ve never played Outrun 2, you’re quite simply missing out on one of gaming’s simple pleasures.

Have Outrun memories?  Let me know in the comments, and be sure to check out past games in the 31 racing game greats countdown below! 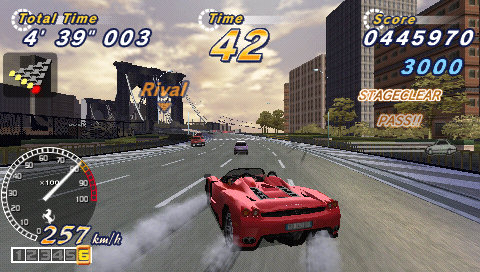