I picked up Weapon Shop de Omasse for a pittance in a Nintendo eShop sale a few months back, and I’ve dipped into it a few times over the past few months. It’s the perfect example of a game with a winning idea that’s let down by poor execution.

The set up is that you’re an apprentice in a fantasy weapon shop, and it’s your job to supply would-be adventurers with the right swords, axes and cudgels for the job. You forge the weapons through a rhythm-action mini game, and the more accurately you time your hits, the more powerful the weapon, and thus the greater the chance that your customers will be successful in their quests.

It’s a neat twist on the old RPG formula, and my initial experience with the game was great, but it quickly gets ludicrously repetitive. New weapons are introduced periodically, but the way you create them is the same, and – most frustratingly – the actual forging minigame feels annoyingly imprecise. It seemed almost random as to whether the weapon would come out ‘dull’ or a ‘masterpiece’. There’s also little room for emerging complexity – new metals and ores are introduced, but they don’t seem to have any impact on the game, and you can safely ignore them with no effect on the gameplay.

One thing I did like was the slightly naff humour of the game. The game was created by Japanese comedian Yoshiyuki Hirai, and with its laughter soundtrack and regular outbreaks of applause and boos, the game felt like one of those ubiquitous Japanese panel shows, where guests pop on, eat something ludicrous or watch an amusing video and then engage in asinine banter. Despite having only the faintest grasp of Japanese, I used to love watching these shows when I lived in Japan – perhaps because they were so different to the TV I grew up on. So if nothing else, the game reminded me of some happy times back in Nippon.

However, despite its best attempts at humour, Weapon Shop de Omasse quickly became unforgivably dull after the first few hours. I stuck with it in the hope that the ending might offer an amusing conclusion, but if anything the game gets worse as it goes along, and the ending is horribly disappointing. Rather than redeem the game, it made me question why I’d bothered to stick with it. 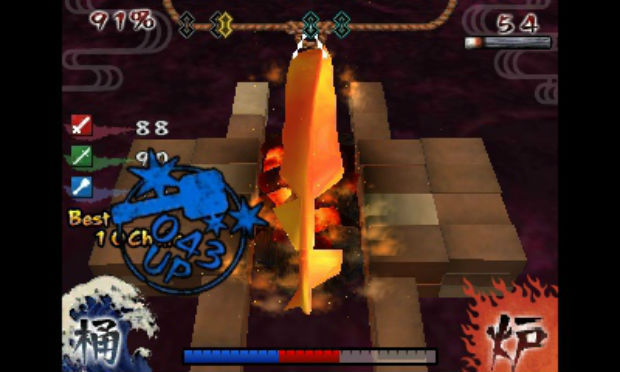