I find it comforting just how quickly I fell back into old habits playing id Software’s rebooted and somewhat reimagined Doom. Innovation to video game mechanics – the nuts and bolts that make the things tick – move at such a rate of knots that it’s easy to forget to often simple joys of what came before.  Doom in this case is what came before, and on spending a good chunk of time with the new game, I’m starting to wonder why we left it behind.

Doom is quite simply the same as it ever was. It’s prettier sure, and there are some more modern day trappings sprinkled across the top, but Doom is now as Doom was then. It’s impossible to know what would or could’ve been, but I can’t help but feel that if the Masters of Doom had the latest technology in the 90’s, this is what they would’ve unleashed upon an unwitting society.  It’s fast, it’s violent, it’s frenetic, and it’s fantastic.  From the moment the first zombie-soldier shuffles on to the screen, it feels just as it did more than 20 years ago. The masters may have changed, but Doom is back in a big way.

I’m amazed at how much I missed the simplicity of the series – where the action more often than not reigned supreme. Getting from A-B is a pleasure:  the enemies are fun to fight, the weapons are distinct and memorable, and the top-notch level design is maze design at its best. Doom isn’t about telling a grand story or about engaging the player on an emotional level (there is a premise, but I hesitate to call it a story), it’s about tapping into our primal instinct to survive. Minute to minute the pace of the game requires a “don’t think, just shoot” mentality, and as levels came and levels passed, after a few hours of play I realised that Doom is exactly what I wanted from video games.

It was at that point I realised that the game at no point asked me to reload my weapons. Thousands upon thousands of rounds were spent on hundreds and hundreds of enemies and not once had I stopped and reloaded in preparation for the next encounter. I had felt overwhelmed and I had felt like the odds were stacked against me, but not once did I feel like the mechanics of the game were imposing that sense of dread.  Doom is a game that respects your time and respects your ability, and in that sense despite being filled with nostalgia for those of us that were around in the 90’s, is the most modern video game I think I’ve played, lest I call it ‘post-modern’ in its design.

Doom doesn’t feel like it’s striving to be anything more a bloody good video game. . The modern video game has conditioned us all to look for an explicit progression path, dangling the carrot of a new enemy or a new perk in front of our eyes at every corner. It teaches us to look forward to the next thing rather than enjoy the here and now. Doom doesn’t pander to modern tastes, rather serves as a keen reminder that videogames are fundamentally about the connection between our hands and our eyes. It isn’t deep, it isn’t smart, and it doesn’t feel the need to introduce new mechanics or new enemies to players right to the death. But it knows that what it has ‘in the moment’ is enough to keep you wading through the giblets and playing right through the very end. Doom knows its a video game and it is better for it.

(Doom isn’t the first reboot of a 90’s id Software classic I rather enjoyed; I found Wolfenstein: The New Order  quite excellent albeit for different reasons) 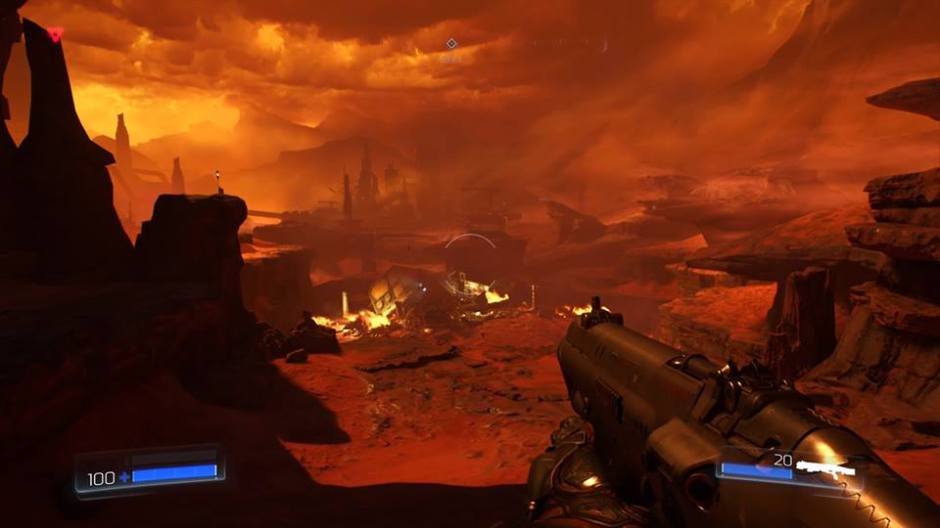