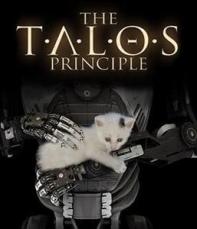 I still distinctly remember the hours that followed walking out of the cinema after seeing “Moon”. Still struggling to come to terms with the notion of ‘created memories’, while walking along the iconic Chapel Street the friend I caught the film with started to entertain the notion of teleportation, referring to an article he’d read recently. And while it was a stunning day in Melbourne – the sun searing on the asphalt as Melbourne’s deeply entrenched culture freely flowing all around – I was too busy contemplating “it all” to take much notice. And by “it all” I really mean it. He may not have known it at the time, but this innocuous conversation between two friends on a high after watching a bloody good film, has haunted me in the years since.

It started off innocently enough.

“So teleportation is possible, but with one pretty significant caveat” he said.

I expected it to be something small. You know, a sort of ‘technicality’ that would render it a rather pointless technology, even if it were feasible.

“What, I can’t choose where or when I teleport to?” I snickered, gesturing down a side street that got us to his house quicker.

He laughed off my dismissive response, “No. I’m pretty sure it’s okay between fixed points in time and space. It’s just that it’d kill you”

“Right” I laughed, “so it doesn’t really work at all”.

“Yeah it does. Your genetic makeup and all your memories are transported to the destination. It’s just that it is a carbon copy of the ones that left. You are at the destination – or at least everything you are. But the you you knew isn’t you – if you catch my drift” he explained, obviously feeling a bit more comfortable with the subject that I was, “would you do it?”

“I’m not sure mate, I mean it’s not really me, is it?” I told him, still not really quite sure what to make of the situation.

“But you wouldn’t know,” he asserted, “the you at the other end is for all intents and purposes, you. It’s still you, and it thinks it is the you that transported from the other end” he asserted.

I had to think hard about what I’d just said and so the rest of the walk back to his apartment was a decidedly silent and somber affair.  The idea that I could exist – or rather a carbon copy of me with my memories and my genetic make up – without it necessarily being “me” twisted my mind in impossible ways. Like Moon’s thematic undertone, he had twisted my ideas of what being a conscious human being with memories meant, and whether “me” as I know it is unique to any other clone of me that could theoretically exist. It was fair to say I was probably the most confused I’ve ever been.

My recent play through of The Talos Principle – where you play a cyborg avatar tasked with solving puzzles in eden-like worlds – gave me very similar confused feelings that verged on an existential crisis. Being forced to question my own views on consciousness and humanity wasn’t something I was prepared for necessarily, rather expecting that the game’s puzzles would test my brain in a more lateral way. And there were times where the game’s ‘chambers’ – somewhat reminiscent of Portal’s setup – did stretch the grey-matter to find a solution. After all organising blocks, light beams, fans and ‘ghosts’ in a series of increasingly difficult and multi-staged puzzles certainly isn’t for the dedicated. But it was the narrative that drove the game forward – namely my interactions with seemingly sentient computer terminals called “Milton”, the game’s equivalent of “GERTY” – that at times kept me frozen on the spot in search of answers. Answers that I ultimately cannot answer.

While the puzzles are what you strive to complete, Milton is your main interface with the game’s world, the key catalyst for your inevitable distrust of voice-in-the-sky Eloheim, and a database of all of the world’s knowledge and carrier of the world’s story. It is through accessing these terminals between puzzles that you discover most of what the game’s world is as you try and discover what the purpose of this world is.

It is no happy accident that these conversations Milton also happened to be the part that forced me not only to think philosophically about not just the game’s world but also our world more broadly. Through positing questions and putting forward ideas, Milton effectively shapes your view of that world, and puts forth a reasonable set of assumptions on which to base your own opinions. In the beginning Milton was happy to hold my hand through the world and tell me what to believe.

And so at the start, I felt utterly comfortable with the game’s surface-level treatment of philosophy.   The fact that Dr. Ian Malcolm from Jurassic Park is as close as I’ve ever come to any sort of philosophical thinking really meant that anything deeper than surface level philosophical questions were a bit beyond my comprehension.  “Life finds a way” was about as deep as I’ve ever needed to delve and so an early reference to Jeff Goldblum’s famous line lulled me into a (false) sense of security. 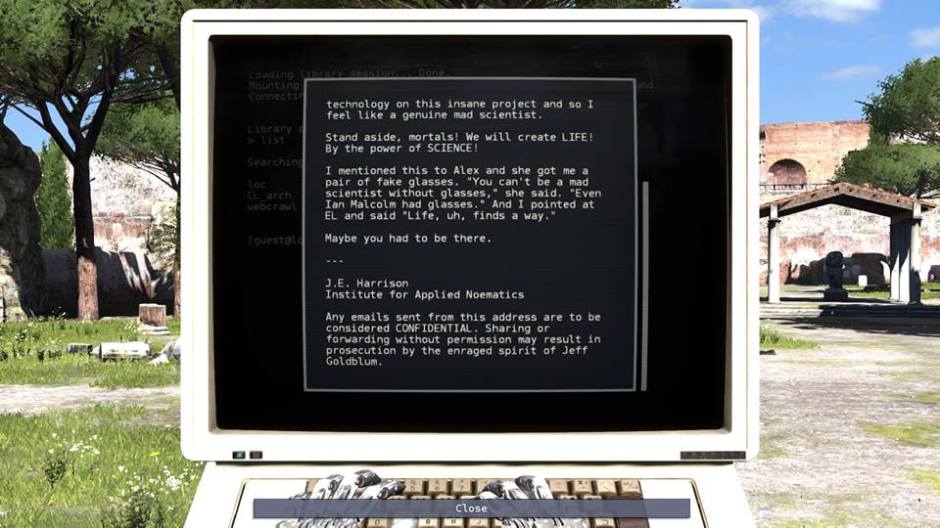 But as I went on, I was absolutely outclassed and outmuscled by the game’s narrative approach to positing philosophical questions. Upon being asked by Milton a series of questions about what it is to be ‘human’ it was fast to point out the inconsistencies in my responses:

It may have been all smoke and mirrors, but being lectured on humanity by a computer within a computer was unsettling, particularly when my views on it seemed to be so inconsistent. If it was all a ruse, it was a bloody good one, and it had successfully made me question by core belief system and cognitive thought processes. But things only go more complex from there and it didn’t hold back on the philosophy, remembering everything I’d answered to that point and probing more deeply as the game went on, in a way that was more informed than a logic test:

Knowing that I was empathising with a cyborg avatar to convince an artificial intelligence of its humanity automatically put into question my own beliefs about what it mean to be a ‘conscious human’ – but the fact that Milton was never shy to point out the incongruous nature of my responses to its questions made me start to question whether I may not be as consistent and rational as I thought. Not to mention whether I had a thoroughly anthropocentric view of consciousness.  After all, what really is the difference between me and a frog? Touche, Milton.

Then he started to question my ‘purpose’ in the game world, and in fact, whether there was anything beyond the world. The “god-like” Eloheim had promised me everlasting life if I were to follow his instructions, but Milton was calling into question my faithfulness to the voice in the sky. It was an obvious question – but one that I usually take fore granted in video games – but could it really be the case that the sole purpose of the world and indeed me was to solve the challenges the game throws at me. It was as much a subtle commentary on game design as it was on the wider world, but one that distilled neatly into one simple question: what is the purpose of this world?

The Talos Principle asked questions I’d never considered before and I wasn’t prepared for them. These questions haunted me vividly for the days while – and the weeks after – playing the game. Like a broken record they’d repeat in my brain: “what is my purpose?” and “why is this world this way”?  And each day I’d be no closer to an answer than I was the day or week before. The game may have been fantastical fiction, but its questions were equally relevant in my own context.

Confusion was beginning to spiral into an existential crisis of sorts – one brought on by a video game no less. If it was the intention of developers to get players thinking more deeply, the Talos Principle had done its job.

But while facing a faux existential crisis is obviously not something to brush off, I find some comfort being forced to question ‘what it is to be human’ or ‘what it is to be “me”‘.  If it has felt a bit like I’m rambling incoherently, it’s because I am, because none of it makes any sense to me.  It wasn’t that I didn’t have the wherewithal to overcome its many hurdles and crash my way through to the credits of the game – quite the contrary – I finished up playing the game practically over the course of a weekend. It was that a video game had asked me questions that I’d never felt compelled to answer before.  And that I know in my heart of hearts I’ll likely never be able to answer.

In the same way that Moon is a great piece of filmmaking that gives me goosebumps whenever I watch it, The Talos Principle is the sort of game experience I’m not sure I’ll ever leave behind.  Not just because of its ‘workmanlike’ approach to how it’s puzzles are designed in such a way that they gradually build your understanding of how you can solve them, but because it forced me to actually think about the world in a more deep and meaningful way. I am not a religious man, but having an answer to these sorts of existential queries must be a big appeal for people, even if it does seem outlandish at times. The fact that the world all takes place in some sort of an artificial construct even seems like a logical conclusion the more you think about it – an idea that Elon Musk seems to champion while he’s not saving the world from itself from somewhere in California.

If nothing else, The Talos Principle opened my eyes to the importance of the theory of knowledge, in broadly understanding the world. I have a friend at work who likes to tease me about solipsism and the fact that I can’t prove that he or anything else for that matter exists. I usually laugh it off in the same way I’d laugh at trying to quantify the size of the universe. But The Talos Principle made that line of questioning make sense, and I’m grateful for that. 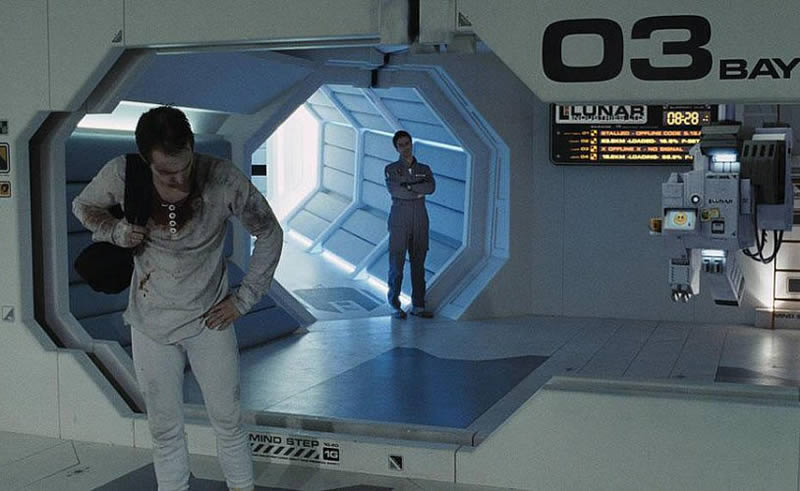