I’ve been thinking of giving my Xbox 360 the old heave ho for a while now. But before I let the old girl go, I wanted to sample some of the handful of games I’ve procured for it that I’ve yet to cast my critical eye over. I blew the dust out of the old dear’s vents and fired up the white 12GB beast. A quick look at my profile revealed it’s been a whole year since I last switched her on – how time flies.

Of all the unloved Xbox 360 games on The Mantelpiece, Metro 2033 was the one that most intrigued me, so that was the one I reached for. Based on a Russian novel, the game tells the tale of a post-apocalyptic Moscow, where the survivors of the disaster have formed a new society in the city’s metro system, safe from the radiation and mutant horrors above. But mutant attacks are on the increase, and new, mysterious entities known as ‘Dark Ones’ have appeared on the scene.

It’s an intriguing set-up, and it’s wonderful to see a post-apocalyptic game that – for once – isn’t set in America. In the sense that it features mutants and is set in an underground ‘bunker’ of sorts, Metro 2033 bears close similarity to Fallout 3. But the Russian setting really makes it feel different, and this is a much more linear adventure – a first-person shooter full of corridors rather than a full-blown RPG. 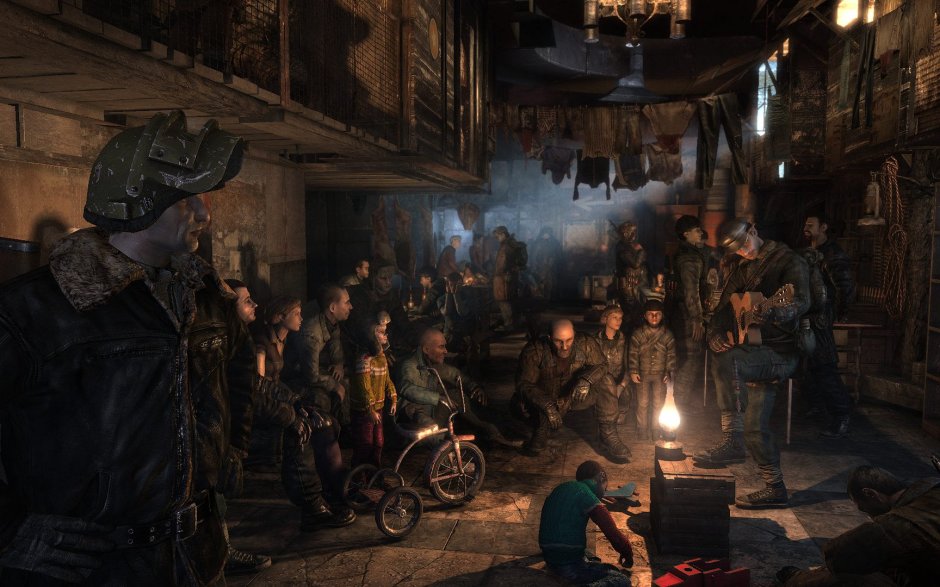 The characterization and atmosphere are simply excellent. Each station is dripping in detail, packed full of eye-catching posters and NPCs going about their daily business of survival. I spent a good while just listening in on their conversations and taking in the lore of this subterranean world. Individual societies have sprung up at each station, and traders trek back and forth between them. Some have been taken over by communist or fascist ideology, and have started wars with their neighbours. It’s a fascinating world to take a glimpse into.

The gameplay, too, is clever. Bullets are scarce, and the weapons you find are often cobbled together from spare parts. Cleverly, the currency of the metro is military-grade bullets that have survived from before the war – which are really too valuable to fire. Instead, you mostly have to rely on weak ammunition that’s been fabricated in makeshift factories across the underground. I love the fact that there’s no HUD to speak of, too – things like objectives can be found on a clipboard that you hold in front of you, using a lighter to illuminate it.

So, a great game then. Or perhaps not.

It all fell down at the point when my companion Bourbon was incarcerated by bandits. I started the level in the air vents, as a guard walked by whistling on a set patrol pattern. “Shit,” I thought, “It’s a bloody stealth level.”

And it was all going so well, too.

I hate stealth games. I simply don’t have the patience for them, which is odd because I’m usually a very patient person when it comes to pretty much everything else. Perhaps it’s because I play games for escapism, for the feeling of exploring exiting new worlds, discovering fascinating stories or embodying an all-powerful avatar. Not skulking about in the dark and hiding in drains.

I’ve always felt like this. I remember playing Metal Gear Solid for the first time (on the Dreamcast, interestingly enough, thanks to Bleemcast), and just wondering what the fuss was all about. I found the game thoroughly irritating with its endless monologues and boring sneaking, and gave up on it after no more than a couple of hours.

I found Deus Ex: Human Revolution similarly frustrating. Thankfully though, that game at least let you beef up your weapons to the point where by the end I pretty much ignored stealth tactics in favour of going in guns blazing. It was a similar story with Dishonored – the game gave you the option to focus on sneaking or all-out warfare, and I unfailingly chose the latter. Sure, I might start off being a bit stealthy, but by the end of a level I’d always be relying on brute force to finish off my objective.

Sadly, the brute force method is highly unreliable in Metro 2033. After about 12 attempts, I finally managed to get to Bourbon by mowing down all the guards in the way, but it was very tricky. Artyom, your character, can’t take many hits before buying the farm, so it took a long time to carefully work my way through and eliminate all the guards without dying myself. 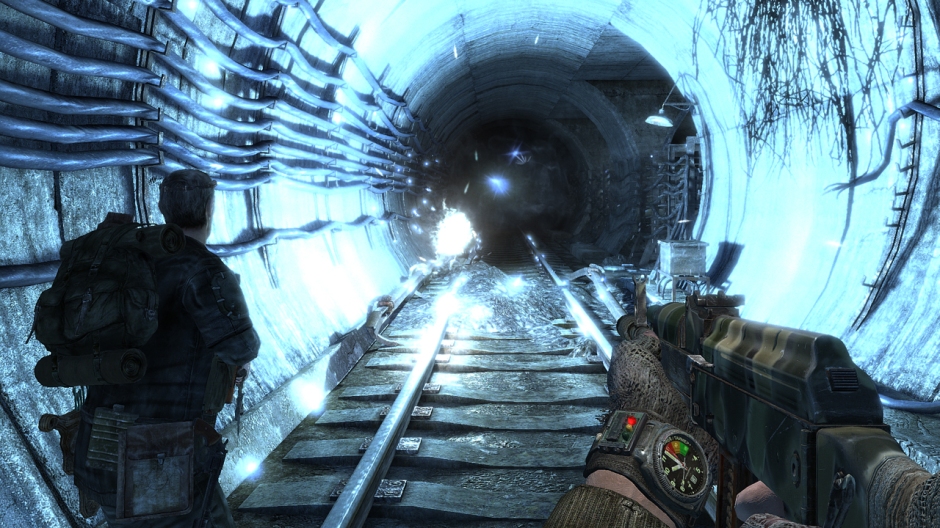 Still, I finally did it, and the next level was a treat. One of the things I really like about this game is that it’s not just mutants you face – there’s all sorts of really weird paranormal shenanigans going on too, and no-one really knows what’s causing it. I lapped up all the bizarre phenomena, and when that ended, I found myself on the front lines of a war between Nazis and Communists.

And then there was another f***ing stealth level.

This time, the ‘non-stealth’ route was practically impossible. Faced against a legion of armoured Nazi guards with shotguns, I died continually. Eventually, enough was enough. I turned off the Xbox and vowed never to play Metro 2033 again.

It’s a real shame, because it’s a beautiful game (if you can call a post-apocalyptic subway beautiful), and it does a superb job of conjuring atmosphere. But unlike Dishonored (and to a lesser extent Deus Ex), stealth is pretty much required, rather than an option.

I think I’ll just read the book instead.