If I’m honest, the main reason I bought Chibi-Robo! Zip Lash was for the sweet, sweet amiibo that came with it. I love Chibi as a character, but Zip Lash released to mediocre reviews, and I’m not that big a fan of 2D platformers anyway. Still, I thought that I may as well give the game a go, seeing as I’ve got it.

My first impressions seemed to confirm my initial suspicions. Adorable as Chibi-Robo is, even his stratospheric levels of cuteness can’t disguise the fact that he’s trapped in a bland and uninspired platformer. The main draw of Chibi as a character is that he’s only 10 centimetres tall, which means that from his perspective, ordinary domestic settings like a kitchen become enormous caverns packed with dangerous and impassable objects. Yet Zip Lash barely gives any sense of scale – aside from things like towering beach balls or chairs in the background, there’s no sense that you’re playing as a tiny robot, especially as the levels are often made up from big grey and orange blocks.

The plot is also wafer thin. Chibi is cleaning the International Space Station when suddenly reports come in of stuff being stolen from tiny red aliens back on Earth. We’re not sure why they’re taking it, they just are. Anyway, it’s apparently reason enough for 6 worlds of platforming and coin collecting. Oh, and rescuing ‘Chibi-Tots’, tiny robots that need saving… for some reason. There’s three of them on each level, and if you get all three, you get a… well, you get a badge to say you’ve rescued them. Neat, huh?

That was sarcasm, by the way.

The point is that like many 2D platformers, Zip Lash commands you to gather up various varieties of collectibles on each level, but also like many platformers, it doesn’t give you much of a reason to actually collect them. I need more inspiration to replay a level than simply gaining the knowledge that I’ve collected all the stuff it has to offer. Why can’t collectibles be linked to ways to level up your character? Or used to unlock costumes or other extra stuff? Or even linked to some sort of Animal Crossing-style house, where the things you get can be used to buy things for your home and the Chibi-Tots you rescue start populating its rooms? There’s loads of ways you could make collecting things more interesting than simply handing out a badge to say you’ve got three of whatever.

There are unlockable costumes in the game, and they’re some of the best bits about it. Seeing Chibi dressed as a chicken was one of the highlights of my week. But the way you unlock the costumes is, frankly, stupid. You can only find them on your second playthrough of a level, by rescuing a lost alien. But even if you do successfully manage to rescue the alien, there’s only a CHANCE you might unlock that level’s costume. The only way to get a 100% chance of getting a new costume is to input the code for that level – each time you successfully get a costume, you get one digit of a five-digit code, and the idea is to share the digits on Miiverse, so that the community as a whole can work together to get the full code.

It’s a stupid, infuriating system. Of course, I simply looked up all the codes on GameFAQs and put them all in straight away, which was tedious in itself. But I still resented having to go back and play the levels again just to do one tiny bit of them to get a costume.

All the way through playing this game, I rubbed up against gameplay systems like the one above that seemed poorly thought out. Why put costumes behind admin barriers? Why not hand them out as rewards for challenges? I’m thinking of the Super Mario Galaxy games or even Super Mario Run, where finishing a level unlocks challenges such as completing it in a certain time limit, or collecting a set number of coins, or even racing against a doppelganger. Make it fun to replay a level, rather than a chore.

The roulette wheel that appears at the end of each level is another example of one of the game’s systems that seems to be incredibly poorly thought out. Rather than finishing a level and going straight to the next one, you instead have to spin a roulette wheel to see how many levels you advance. You can ‘buy’ numbers to add to the wheel to improve your chances of going to the level you want, but I’m baffled as to why the wheel is there in the first place. Each world has six levels, and you have to finish all of them to unlock the boss for that world. So why would you want to advance, say, three levels? You’ll still have to go back and play the two you passed over, and if you don’t get the number you want on the roulette wheel, you might end up playing a level you’ve already completed. It’s infuriating and pointless – especially as when you finish a world, you can go back and select any level you want at any time. Why not just let you choose any level in the first place? 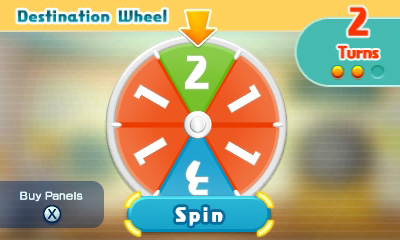 Then there’s the incredibly slow loading screens, pointless transition animations when switching levels, tedious scrawls of repetitive text whenever you want to select anything in your ‘Chibi-House’… the list goes on. It feels like the game is packed full of systems that are designed to irritate the player.

I did find myself quite enjoying Zip Lash once I’d got past my initial frustrations. The zip lash mechanic – using your plug ‘tail’ as a whip to swat enemies and attach to panels – is clever and satisfying to use. Plus the difficulty is pitched just right, and there are some really clever design ideas, especially in the later levels. Setting Chibi on fire to smash through ice, swinging across gaps like Tarzan, the occasional wakeboarding level.. it’s all good stuff. It’s fun.

Which makes it all the more frustrating that the game is hog-tied by systems, like the roulette wheel, that seem to drain all the enjoyment out of it. I found myself wishing that towards the end of the game’s development, some Miyamoto-style producer could have swooped in and said “get rid of this system, chop that bit out, put this bit in” and generally rearranged what’s there to make this a 9/10 game, rather than the 6/10 game it currently is.

I mean, the amiibo integration is great. You can tap your Chibi amiibo to level it up with the points you’ve accrued and then gain access to better toys from an in-game ‘gatcha’ machine. And I love the real-life snacks you can collect – things like Mr. Tom peanut bars, and weird sweets from around the world that I’ve never heard of before. I wanted to collect them all – but it was infuriating that the description of each snack was locked until you presented the right snack to the right toy on each world, and even then you’d have to sit through another boring animation. A further example of a great idea that’s somehow rendered slightly tedious.

It’s all there. The makings of a truly great game are all there, they’re plain to see. But somehow they’ve been obfuscated with pointless systems and busywork. It’s such a shame, because for the most part, if you can put up with the frustrations, there’s a lot of fun to be had in Chibi’s world.