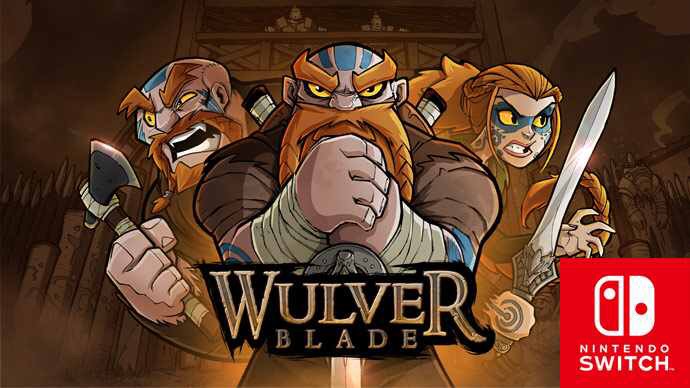 Without an ounce of irony, the gents at A Most Agreeable Pastime give their new American correspondent the task of reviewing Wulverblade, a love letter to classic beat ‘em ups wrapped in a veneer of defending Britannia from the Roman Empire circa the first century. Luckily, what I lack in British cultural knowledge is made up for by a general interest in history and a fondness for destroying interlopers who think they can take the north.

I won’t pretend I know entirely what the story is about and write flowery anecdotes about actual events or knowledge drop pertinent dates, but the gist of Wulverblade has you following Caradoc and his tribe as they push their way south after discovering other Brits have sided with the Roman Empire and are letting them waltz forth and take over their land. While interesting just from a thematic standpoint, Wulverblade takes the concept and runs with it. It’s not just a backdrop, it truly is the core of the game. OK, so slashing traitors to pieces and impaling legionaries is the core of the game, but what elevates Wulverblade above other beat ‘em up homages is the context in which the action takes place. 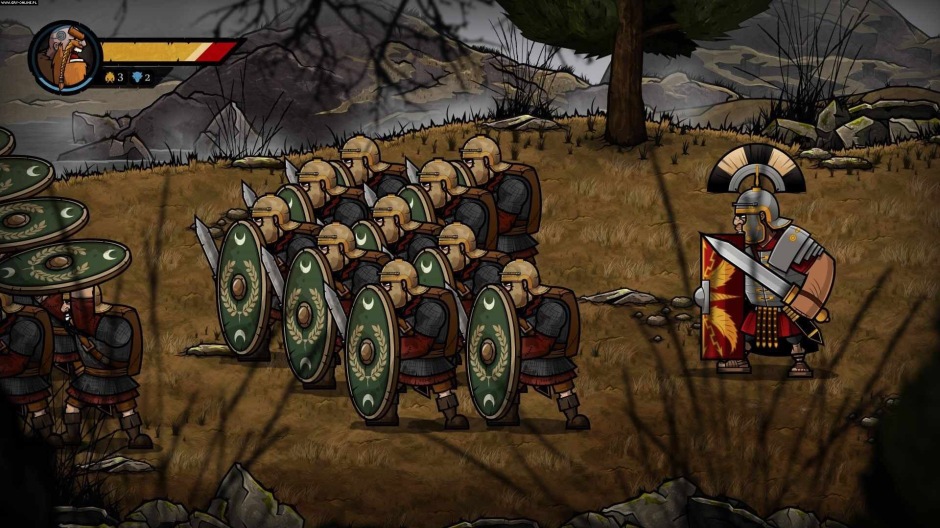 The hand-drawn renditions of Britannia are beautifully dreary; dark green forests and grey skies, constantly filled with rain. While the action in the game remains constant, one of the things that propels you forward is seeing lush backdrops so blustery and dripping with moisture it practically puts a chill in your bones. Level design in beat ‘em ups is imperative because without something to excite the eyes, players will quickly realize they are doing the same thing over and over again. Rather than being a flat plane, the land undulates with hills and bridges and is filled with hazards such as fires and staked fences that can also be used in combat.

The other thing that draws you ever forward is a litany of historical notes, diary pages and photographs/video of still-standing ephemera that are hidden throughout the game. They are dense and break up the flow, but at the same time they’re an interesting respite from the constant hacking and slashing. It also drives home how devoted and interested the developers were about the subject to even bother to include such bonuses. I found them utterly fascinating and well designed, to the point that they were more of an impetus for me to see the end than the actual goal itself.

I should probably tackle the crux of the game, the combat, about now. It’s hard not to find parallels and tropes taken straight from Golden Axe, Final Fight and the aforementioned Double Dragon. You waltz across the battlefield, kill or maim a set amount of opponents, then an arrow (or, in this case, a sword) pushes you forward to the next murderous choke point. Fighting feels gritty, destructive and right. A game like this hinges on the impact of your hits, and each stab, slash and wet thwack you produce is cathartic. There are a few Hail Mary’s, such as being able to summon a pack of wolves once per level or going into an invincibility-inducing rage that helps you cut down foes faster while giving you health. Other helping hands include extra weapons, the ability to grapple your enemies and, of course, picking up health-giving meat from vases. It’s all familiar, but has just enough spin to make it feel unique to Wulverblade.

The only real downside to the game, and this may not be the case for everybody, is the fixed difficulty that sometimes comes across as unfair. Often you’ll find yourself surrounded by hordes of foes that will bat you around without giving you a chance to collect yourself. This in turn will force the use of cheap tactics such as cornering or leading bad guys into environmental hazards that lessen the effect of the actual combat system. Bosses are suitably verbose and scary, but tend to follow the trend of having unstoppable, un-dodgeable attacks while also funnelling lackeys to make sure you can’t truly get the upper hand. The pacing in general is slower, so being set back to either the beginning or the mid-stage checkpoint gave me pause as to whether I wanted to try to tackle it again. Bullying my way through was satisfying enough for the most part, but I always felt like there could have been a different way to go about it that would make the player feel accomplished by studying the enemy, instead of cheap-shotting their way through. Perhaps a player without any prior experience with the genre will find it a bit disheartening, but knowing that these types of design choices are the norm lessened the blow a little bit. 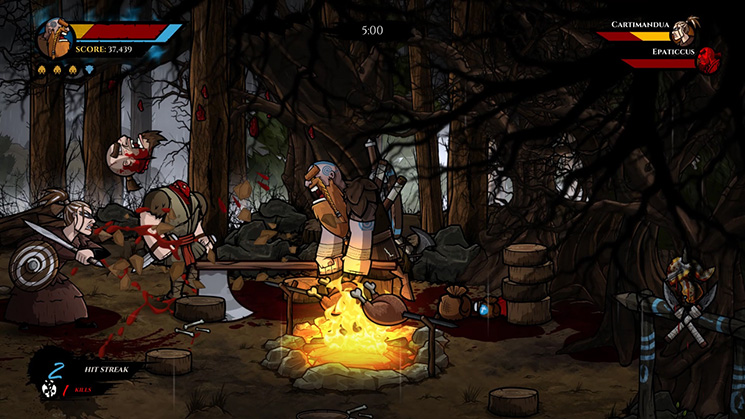 Did I learn a lot about the puritanical world of Britain circa 120 A.D.? Perhaps a little bit. At the very least it makes me want to wander around those ancient stone circles that still litter the land. Did I discover that I missed old fashioned knuckle-dusters where you flow down arbitrary paths ending swaths of bad guys in a cathartic pattern of violence? Absolutely! While fighting isn’t my M.O. in reality, there’s something to be said for being an underdog and working your way through the chain of command of your oppressors. Would I recommend Wulverblade to anybody that has even the slightest inkling they might be into these same things? Definitely.

Disclosure statement: Review code for Wulverblade was provided by Novy Unlimited. A Most Agreeable Pastime operates as an independent site, and all opinions expressed are those of the author.