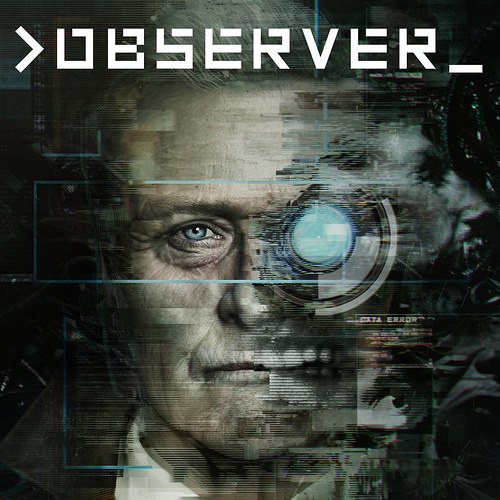 Observer is the latest game from Bloober Team, creators of the excellent horror game Layers of Fear. Layers of Fear would probably be best described as an extended tour through a heavily scripted, but very well-produced haunted house. It had amazing atmosphere, but very little interactivity, and was a very short experience. Still, it was a very enjoyable experience and from the looks of the previews, Observer seemed like it was basically just going to be Layers of Fear, but with a cyberpunk setting. I actually would have been totally fine with that having been the case, but I’m pleased to say that Bloober Team have expanded a bit on their previous design, making Observer feel like an evolution of the formula instead of being a mere clone.

You play as Rutger Hauer, I mean Dan Lazarski, a grizzled future-cop. More specifically, Dan is an Observer, which in this cyberpunk dystopia is a specific type of cop that specializes in jacking in to your brain through your cyber-implants and digging through your secrets. Dan’s story begins with a cryptic call from his estranged son, which leads him to a run-down slum-complex, where he soon discovers a murder scene that puts him on the trail of a strange, mysterious killer. The building enters a state of quarantine-lockdown and none of the neighbors want to talk to a “leech” like you, so you’re forced to do the only thing you can to try and figure this all out, the forbidden act of jacking in to dying or dead bodies. Thus begins Dan’s descent into madness as he’s forced to navigate increasingly twisted and broken realms of sub-consciousness, at the expense of his mental barriers between fantasy and reality, and begins to learn that there’s something bigger and stranger going on than he realized.

Unlike in Layers of Fear, where you mostly just walk through a linear series of rooms and watch strange things happen, in Observer you have a bit more free rein over the environment and are given a little more to do. Investigations of various crime scenes require a little extra exploration work, a few stealth scenes in the vein of Soma/Amnesia/Outlast/etc have been added, and the number of puzzles seems to have generally increased. Overall though, despite some added depth, this game is still primarily about exploration and the experiencing of well-produced scripted events that involve psychological dangers more than physical ones. If you’re ok with that, then you’re probably going to like what you see here, because it’s incredibly well done. If you find games like Layers of Fear, Soma, or Amnesia to be not active enough for your taste, then it’s very likely that this won’t do it for you either.

What really stands out here is the surreal design of the various mental realms that you enter. Here is where we see some truly bizarre scripted sequences that are reminiscent of those in Layers of Fear, but this time they tend to be less passive, often requiring you to solve some equally surreal puzzle in order to move on. Some may find this off-putting, as it can sometimes be pretty unclear exactly what it is the game wants you to do. Typically the solutions make no real sense, like “Oh, hey, I just needed to pick up the plug dangling from this floating monitor that’s laughing like a small child, and carry it with me so the monitor acts as a light through this dark area, and then find a socket to stick the plug in, which opens a door, where I have to find a new floating monitor child to open another door”!

This obscure dream logic will probably be a bit too obtuse for some, though for the most part I found that the game did a pretty good job of at least pointing you in the right direction with effective use of visual cues. If you just look around enough and play with every interactive thing you find, you can probably get through just about anything without much trouble. There were one or two moments where I found myself briefly stuck and unsure of what to do next, but this usually turned out to be something silly like me forgetting that you could try to hack password-locked doors. Even the rare few parts where you have to run and hide or die are pretty forgiving and simple.

The visual design in this is just astounding too. The portrayal of this condo, that’s simultaneously disgustingly run-down and bursting with advanced technology, and flashy lights and holograms, is about as cyberpunk as you can possibly get. Everything is amazingly detailed and bursting with a tantalizing array of colors, and this just in the “real world”. The mental realm areas are like if you took all the craziest scenes from all the best Lynch and Cronenberg movies, re-shot them all using modern movie magic, and then threw them in a blender with a copy of Blade Runner. Each one is specifically designed to reflect the psyche of the person whose mind you’re diving into, and is vastly different from person to person. The intricate visual design of these environments and the seamless transitions between these astral mazes and the real world is just beautiful.

My only complaint here is about the gradually increasing static effect that you start seeing after your first brain jacking trip. It gets stronger and stronger after each one you do, and never goes away no matter how many of those synchronizing pills you pop. I get that this is supposed to represent the continued degradation of your mental state and your cyber-implants, but the effect gets so strong that it started to become a little distracting from the otherwise great looking environments. I found myself wishing that I could dial it down a few notches so that I could see all these nice locations in all their well-rendered glory.

I think that the only other compaint I really had about the game was that Rutger Hauer wasn’t nearly as exciting as I imagined he’d be. His natural Dutch accent was slipping through almost constantly, and he was often so mumbly and/or slurry that I suspected he might have been doing his lines over the phone while knocking back a few cold ones. I suppose it’s possible that this was intentional, that this was supposed to reflect the poor mental and physical state of his character, but it usually sounded like he was more uninterested than run-down.

Observer is also about three times longer than the very brief Layers of Fear, so that’s nice. There is a big choice to be made near the end that will lead to one of two different endings, so there’s at least one reason to go back and play it again someday. It’s not the kind of game I’m going to immediately restart from the beginning just to see that second ending, but it’s definitely one I’ll revisit someday in the future.

This is certainly an above average horror game, as well as being an excellent cyberpunk game. If you’re someone that likes passive horror games like Soma, Amnesia, and Layers of Fear, then you will surely enjoy this one too. It doesn’t quite top Soma (the king of this particular subgenre, in my opinion), but it comes awfully close and has enough of its own unique style and substance to make it an experience worth having for horror fans.

Observer is available now digitally on PS4, Xbox One, and Windows.