With a deluge of independent games pouring into the Nintendo Switch eShop at a rapid rate, a quick look at the weekly releases makes you realize that publishers are trying to fill gaps in the library before someone else beats them to the punch. So far it has worked like gangbusters for most; sales have doubled or even tripled compared to sales of the same game on other, more saturated systems. With that being said, Unbox: Newbie’s Adventure is aiming to be your comfort-food 3D platformer, something to snack on until the arrival of Nintendo’s upcoming assured magnum opus Super Mario Odyssey. This begs the question – does it have what it takes to stand out beyond being just filler until something better comes along?

As kind of a parallel to Amazon and their impending drone delivery future, in Unbox the parcel service has invented self-delivering boxes to one-up the competition and save money on travel expenditure. Alarmingly, these boxes are apparently sentient and have distinct personalities. They also talk in the Rare signature Banjo-Kazooie style warble – which drives home what to expect from the rest of the experience. 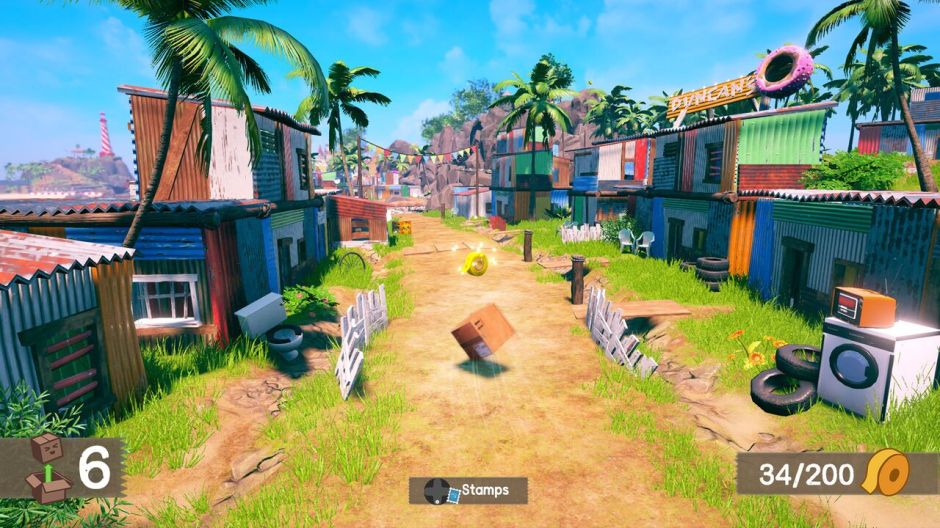 There’s nothing in Unbox that reaches beyond what you discover on the first few levels. It looks very much the part of a Dreamcast or PlayStation 2 game, with the visuals lying somewhere between the blockiness of the previous generation and the expectations we have now. I actually have a soft spot for this look, but it’s mired in an apparent layer of Vaseline that’s smeared across the screen. Maybe this is for effect, but watching the trailer for the game – which was obviously filmed on another platform – shows that there is in fact a crispness that has been lost (note that the sharp screenshots in this review come from the press kit). Luckily the game has very simple textures, so it’s not unplayable by any means.

The worlds within Unbox tread familiar territory. Tropical islands, snow-capped mountains and ruinous jungles are platforming mainstays, and here they appear again as large sandbox environments that the titular Newbie must explore. There are myriad goals to attend to, such as freeing other delivery boxes from rival delivery service Wild Cards and finding golden rolls of tape among the environment’s nooks and crannies, as well as looking for stamps that you either uncover through inspection or by beating challenges. Collect enough stamps and it’s on to the next world, etc., etc. It’s all par for the course, but again welcome on a platform where this type of game isn’t (as yet) seen very often.

What’s sets Newbie apart from other googly-eyed protagonists with a penchant for obtaining useless doodads is that the way you control him is intentionally a little tough. He’s a box, so he rolls like you’d expect a box to. The challenge isn’t just collecting your laundry list of thingamabobs, but controlling Newbie himself. The world is physics based, so the randomness of perhaps not landing exactly as you intended from a jump or accidentally slipping off a cliff is part of its appeal. It’s different to be sure, but it is something you’ll grasp eventually and learn to appreciate further down the road.

While I had more fun than I expected to with Unbox: Newbie’s Adventure, I can’t help but think it’s not spectacular enough to stand out from the eShop crowd. It’s chicken noodle soup for the 3D platformer fan’s soul, but on a system manufactured by a company that made their name by practically inventing the genre, that’s not going to be enough. If you happen to see it on sale or are perhaps a little curious, you won’t be disappointed. But with Switch games on the way that take platformers to the next level, like Super Mario Odyssey and Yooka-Laylee, I wouldn’t go out of my way to pick it up.

Unbox: Newbie’s Adventure is available on Switch, PS4, Xbox One and Steam. We reviewed the Switch version.

Disclosure statement: Review code for Unbox: Newbie’s Adventure was provided by Merge Games. A Most Agreeable Pastime operates as an independent site, and all opinions expressed are those of the author.