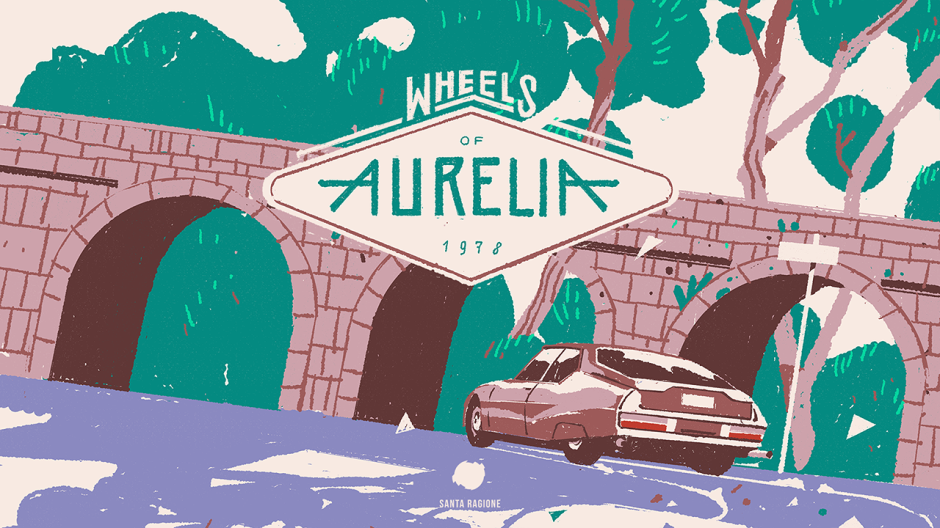 Wheels of Aurelia is a reminder that video games have a long way to go when it comes to setting, themes and what our perception of them is in the first place. In other words, it’s an insular hobby that relies on a handful of tropes that are more interested in terms of sales than telling the player something worthwhile. I’m not knowledgeable enough to have the “are games art” debate nor do I have a horse in the race to begin with, but Santa Ragione’s little road tripping visual novel tackles a lot of disparate things in its short play sessions.

You are in control of a young lady named Lella as she travels across the west coast of Italy on the Via Aurelia for reasons unknown to the player until further down the road. Her companion from the outset is Olga, who has a personality that’s the polar opposite to our free spirited and rebellious protagonist. While you can control the car as is speeds along in an overhead view in an Italy that feels modeled after the board game Life, the point isn’t getting to your destination, rather whom you talk to and pick up along the way.

The duo can pick up various hitchhikers (which maybe wasn’t as big a deal in 1978, the time frame in which Wheels takes place) and have conversations with them. I don’t want to talk about any plot points pretty much whatsoever, as this is the bulk of the game. What I will divulge is that these conversations are very heady, even in today’s political climate. It gives the game an impact you wouldn’t normally see in a video game. What’s also curious is that it’s not beholden to explaining to you certain moments or situations that may or may not make sense to you because they weren’t world events but rather huge cultural touchstones from Italy circa 1970. It doesn’t hold the game back in any way, but I always had the feeling that maybe I didn’t answer the way I would have had I known what exactly there were talking about. I just settled for a certain tone in my replies and went with that.

As you move further down the road, Lella’s intentions are revealed and who you have with you by the end can garner one of sixteen different endings. It’s a curious study in situational awareness and social experiences that shape the adventure and make you want to play it repeatedly, which is the whole point. A trip lasts roughly thirty minutes, so you aren’t expected to invest a lot of time in it. There’s just enough to get a feel for the characters but not so much that the game starts to feel long winded. It’s bolstered by a stellar soundtrack and a neat minimalist design that you can toy with thanks to some clever filters.

The brevity of the game and replayability make Wheels of Aurelia a nice fit for the Switch, perfect for a commute or two. Or sixteen, if you stay the course! It opened my eyes to a game’s ability to have the player transfer their personality into the agency of its protagonist. It’s definitely meant for a certain mindset, and those who won’t be interested in it will probably steer clear when they read the description in the eShop anyway. But for those who want to have stirring and thought-provoking conversations while tooling up the Italian coast, rocking along to some crazy jazz/funk fusion tunes, Wheels of Aurelia is the type of game that’ll change your expectations of what a video game can be.

Wheels of Aurelia is available digitally for PS4, Xbox One, Switch, PC and iOS. We reviewed the Switch version.

Disclosure statement: Review code for Wheels of Aurelia was provided by Santa Ragione. A Most Agreeable Pastime operates as an independent site, and all opinions expressed are those of the author.