The SNES Mini is just lovely. And people are already speculating that we might be treated to an N64 Mini sooner or later. But do you know what would be really amazing? A Game Boy Mini, a tiny little portable stuffed with amazing game’s from the green wonder’s best years. Oooh, wouldn’t that be smashing?

After reading The Gay Gamer‘s list of 30 games that should be on a GB Mini, we were inspired to make our own – so here’s a handful of titles that we’d love to see on a monochrome mini.

[Note: This post has been revised to add games that were meant to be included in the original list.]

What is there new to say about Tetris and the first pair of Pokemon games (later to be joined by the Yellow version)? Tetris was the addictive puzzle game that helped make the Game Boy an instant success when it launched in mid-1989, and Pokemon was the pocket monster catching and battling game that completely revitalized it more than 9 years later. Both games are completely iconic and have been hugely influential, and both epitomize what the system was all about: fun games that could be played on the go and had instant popular appeal, and that made you forget about the limited capabilities of the system. It’s amazing to think that the Game Boy and its upgrade the Game Boy Color dominated the handheld market for almost 14 years (the Game Boy Color was discontinued in 2003), and there are no two games that are better representatives of the Game Boy’s vast library of great titles than Tetris and Pokemon Red, Blue and Yellow. Professor GreilMercs

The Legend of Zelda: Link’s Awakening

After the phenomenal A Link to the Past on the SNES, Link’s Awakening was a downright miracle. I’ve still no idea how Nintendo managed to produce GB graphics that looked just like those on the 16-bit machine. More importantly, the gameplay was just as good, with Link on a twisting, turning quest over an impressively large game world. I played it again just recently, and it still holds up today, although it’s noticeably harder than some of the later games. Lucius P. Merriweather

I almost forgot about this GB gem – how could I forget Alfred Chicken? Although the Game Boy was awash with platformers, Alfred Chicken stood out thanks to its fantastic graphics and clever gameplay. Also, it starred a chicken called Alfred. I remember an amazing PR stunt around its release, when someone dressed as the titular chicken stood as an MP in a by-election. Good work, everyone. LPM

Maybe I’m biased due to my Spider-Man-love (that doesn’t sound right…or does it?), but I was always quite partial to the original Game Boy Spider-Man game. It wasn’t pretty, but it was fun and tough, and you got to beat up a lot of famous villains like Doctor Octopus, Green Goblin, and even Venom. Baron Richenbaum Fotchenstein

Another couple of games with great graphics and fantastic reviews that I never got to play back in the day. Both are platformers – the Game Boy certainly didn’t have a shortage of those – and both were fairly hard to come by, at least where I lived. Experiencing these for the first time on a GB Mini would be like sweet, sweet nectar for my soul. LPM

Donkey Kong Land is a noteworthy Game Boy title on several levels. For one, it presents a rendition of the SNES graphics, which were a technical achievement on that system and which somehow still manage to look good on the original Game Boy. Also, instead of a watered-down port, Rare created what from a modern vantage point might be viewed as a DLC level pack to Donkey Kong Country: although the mechanics and most of the locales are the same as the SNES title, the levels are completely new. Donkey Kong Land is as much fun as Donkey Kong Country, and despite its close ties to the SNES title I would definitely give it the edge over Donkey Kong ‘94. PGM

3D, but on a Game Boy! In the futuristic year 2000, your task is to hunt and shoot big aciiiiid-style smiley faces in a 3D maze – and the game even had support for four players via the GB link cable. Unfortunately the game was as rare as hen’s teeth – I never saw it in the shops – so I could only pour over the fawning reviews of it in games magazines and imagine how great it was. Playing it for the first time on a GB Mini would be fantastic. LPM

Even before the Nintendo Classic Mini, Nintendo was putting together compilations of previous games, perhaps the first of which was the Game & Watch Gallery series. Europe saw the release of Game Boy Gallery, but Game & Watch Gallery is where the classic Game & Watch games really got a new lease on life as the games were presented in both a “classic” mode which was faithful to the original games, and a “modern” mode, which adds graphics featuring beloved Mario series characters. Including them on the Game Boy Mini would be a great way to include these historic titles with their arcade-y gameplay and high-score chasing fun. PGM

Remember when that boss character from Ghosts ‘n Goblins suddenly got a game of his own that became a surprise hit and spawned a few sequels that were arguably more fun than the series they spun off from? Gargoyle’s Quest was a weird mix of action-platforming and JRPG elements that came out of nowhere and ended up being one of the best games on the system. BRF

I bought the import version of this game at a trade fair, and it barely left the cartridge slot of my Game Boy. It was bloody hard – I think I only managed to finish it once – but it’s a great example of Konami at their shmup height. The graphics were astounding for the time, the bosses in particular. LPM

Tetris is by far the most well-known puzzle game on Game Boy, but the system was chock-full of other puzzle games looking to copy its success. Many of them were ports of NES puzzle games, such as Dr. Mario, but Mario’s Picross was a unique title in that it wasn’t a port. It introduced the world to the addictive Picross gameplay, and although it wasn’t that popular at the time, it’s since led to a slew of titles featuring the same Picross gameplay including appearances in the Brain Age games and versions featuring Pokemon and Twilight Princess. The original is still fun, and the explorer costume Mario wears in the game has been revived in Mario’s latest adventure, Super Mario Odyssey. PGM

This early Konami release was a sort of prototype Trials HD, and despite its simple graphics, it was one of the absolute best games available on the Game Boy. Courses were packed with huge jumps and daring loop the loops, and attempting to finish them in the tight time limits was utterly addictive. If you’ve never played it before, I highly recommend you dig it out. LPM 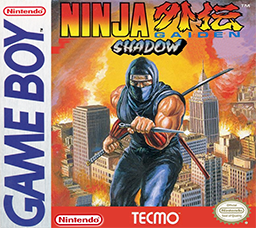 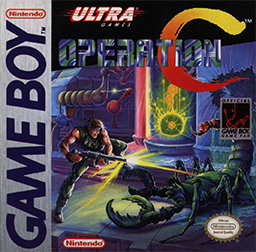 The Game Boy saw many ports and sequels of NES titles, with varying success. Of the third-party offerings, Ninja Gaiden Shadow and Operation C are among the best of the bunch. Although both have mechanics, graphics, levels, and enemies that borrow heavily from their older sibling titles and, no doubt due to technical limitations, omit some of their predecessors’ mechanics, they’re both wholly enjoyable titles that stand on their own. PGM

A nice little side-scrolling action-brawler that had pretty great graphics and sound for an early Game Boy game. Luckily, it was a lot simpler and easier than the sadistic NES version. BRF

I must have completed this game at least ten times. It was crazily easy – but to be honest this was a relief after the rock-hard difficulty of most GB games. The massive sprites looked fantastic, and the chunky sound effects still resonate in my brain. The fact that I hate the Turtles yet loved this game is a sure sign of its quality. LPM

A side-scrolling shooter that involved an unusual amount of strategy. There were even a few puzzle levels thrown in. Very short, but fun enough that I replayed it many, many times. BRF

Wario made his first appearance as the villain of Super Mario Land 2, but he came into his own in his own spin-off series. The Game Boy and Game Boy Color saw three titles in the Wario Land series, but the third, which appeared on Game Boy Color, is definitely the best of them. Wario Land 3 builds on the gameplay of its predecessors, but puts even more focus on non-linear exploration, with paths opening up in a wholly satisfying way. Like the best of the Game Boy and Game Boy Color games this is such a huge adventure that you’ll be amazed at how much the developers were able to cram onto such a tiny cartridge. PGM