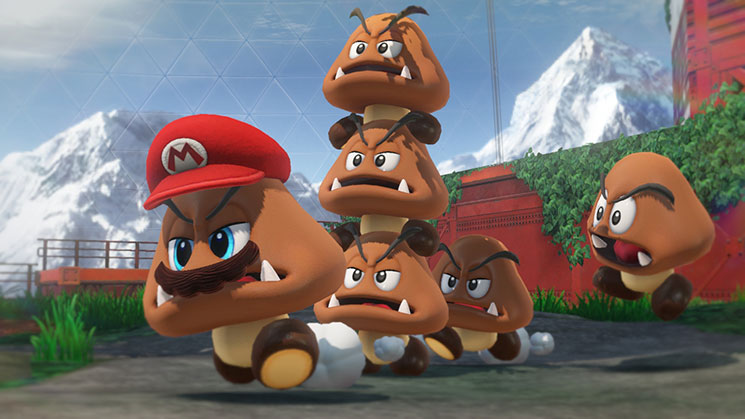 Super Mario Odyssey has been released to universal acclaim, and it’s not hard to see why. Since Super Mario 64, Mario’s first 3-D adventure, Nintendo has tried various ways to make their 3-D games more accessible, such as dividing levels into small sections as in Super Mario Galaxy and providing clear paths to the end of the stage as in Super Mario 3D World, but for the most part Odyssey is a return to the open levels of Mario 64, something fans have been requesting for some time.

The return to Mario 64 style levels comes with a key difference, which is in how you collect the main collectible (Power Moons in Odyssey). In previous games most of the time you would revisit each area with a specific mission to tackle. In Odyssey each kingdom is a vast area that you can explore as you like, and Power Moons can be collected in almost any order. Warp points make it easy to travel between different areas on the map, and, similarly to Nintendo’s other mammoth 2017 success, The Legend of Zelda: Breath of the Wild, there’s a satisfying density of points of interest. More often than not you’ll be in the midst of collecting coins or Power Moons when you’ll see something else that you want to check out, and before you know it hours have passed.

Accompanying the open levels is Odyssey‘s brand-new hook, which is the capture mechanic. Mario can fling his cap out to a range of enemies and objects and “capture” them, a form of possession that opens up a range of different game mechanics. The majority of the captures feel overly familiar and more like re-skins of previously seen abilities (such as flying, swimming, becoming giant-sized, the fire flower, etc.) rather than all-new abilities. But the ones that are new are great fun and will make you wish the developers had dug a bit deeper to include more unique captures. It’s also disappointing that many of the captures were revealed before the game’s release rather than left as surprises for the player to discover.

Despite all the density of the levels, with more than 830 Power Moons to find and collect it’s perhaps inevitable that many of the missions feel like filler rather than essential, such as series of missions that see you tasked with catching rabbits, racing Koopa Troopas, completing some fairly tedious minigames, etc. The game overly relies on nostalgia at times, such as sections of basic platforming presented in a 2-D 8-bit style Mario stages that otherwise don’t have much to do with the rest of the game. It also includes some 3-D platforming challenges that don’t feel nearly as satisfying as previous entries in the series, due to bland visuals and a camera that you can never quite get to be at the angle you want (unlike Super Mario 3D World‘s camera, which was always spot-on). Finding all the Power Moons without resorting to a FAQ can also be overly frustrating, even with the help of various in-game hint systems. Also, the first half of the game feels a bit underwhelming (not helped at all by the dull visuals of the first kingdom, Bonneton) and only about half of the game’s fifteen main kingdoms feel really fresh. The game is divided into two parts, with the post-game providing many new opportunities to find and collect Power Moons, which is a nice way of expanding an already expansive adventure.

Mario platforming fans will never stop debating what the “best” Mario game is, but there’s no doubt that Odyssey is the lengthiest game in the series yet. Because of its huge scope the game feels uneven in many places, but the sheer number of things to do will ensure that every time you pick it up you’ll have fun for quite a long time. Although it definitely feels like a case of quantity over quality, this is still a fun adventure with a new sense of freedom that will appeal to many, and just enough new ideas to entertain even the curmudgeons who aren’t drawn in by the open level structure.