Did you see the Nintendo Labo reveal trailer? Nuts, isn’t it? When I heard Nintendo would be making a big announcement, I certainly didn’t expect it would be cardboard toys that you could plug your Switch into.

But like all good ideas, it immediately makes you wonder ‘why didn’t anyone else think of that’? Not only does building carboard houses, pianos and robots seem like a lot of fun in itself, there’s also that added dimension of interactivity afforded by the Switch – I was particularly intrigued by the little insect robot that the Joy-Cons plug into. I mean, look at it – YOU CONTROL THE CONTROLLERS WITH THE SCREEN. The world has turned on its head, and it’s wonderful.

I also like the way that the game cartridge not only gives instructions on how to build the models, but also gives detailed explanations of how they work, too. I think this will be particularly fascinating – as well as very educational for the young ‘uns. Apparently the Labo piano works by using the IR camera on the Joy-Con, which detects the presence of reflective tape attached to the keys. When the key is pressed, the tape is exposed, and the Switch creates the note. Ingenious. 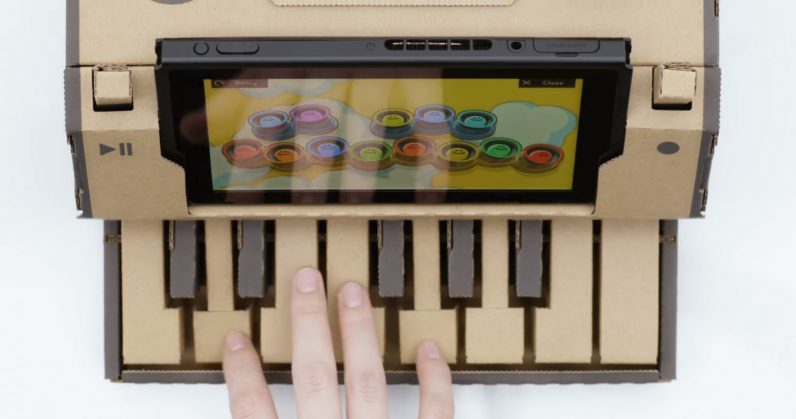 I was also impressed with just how complex some of the models are, with interlocking elastic-band pulleys and articulated cardboard joints. Just check out this still from the video of what looks like the interior of a Labo steering wheel. There’s some serious cardboard construction going on there.

Then there’s the potential for customisation – Nintendo has already revealed a range of tape and stickers that can be used to customise each creation, but I can’t wait to see what designs the creative community can come up with. The scope for what can be done is enormous. I fully expect to be astounded by unexpected user-created designs when the sets go on sale on 20th April.

A few people have pointed out that cardboard is inherently destructible, and that these creations won’t last long in the hands of children. But then again, cardboard can be surprisingly sturdy, and the beauty is that it’s repairable – and repairing it in clever ways just adds to the creativity. Plus, you can always get some new bits of cardboard and cut out replacement parts – or even build a whole new model.

Nintendo Labo is going to be big. It’s the perfect thing for Switch-owning adults to do with their kids – or even without the kids. I for one can’t wait to get stuck into building my own cardboard piano.