Platforming games of yore tended to be more memorable if they did something off the cuff that tackled the genre in unique and interesting ways. Bionic Commando took away your ability to jump by giving you an extendable arm with which to swing from; Metroid subverted your expectations by letting you go anywhere your nimble bounty hunter could reach. Those that toed the Super Mario Bros. line had success; those that waylaid expectations became legends. 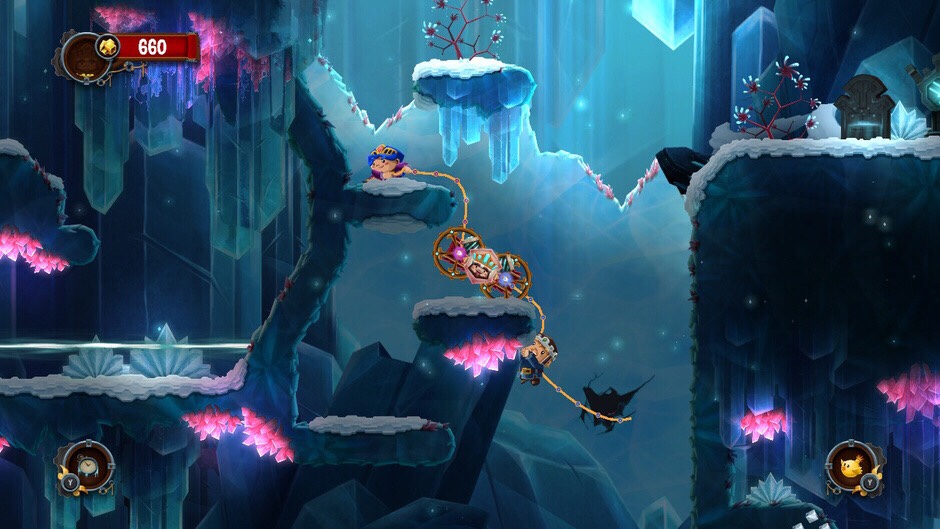 Super Chariot reminds me of these trailblazers, taking a tried-and-true formula and making it its own. In it you play as a Princess (and her fiancée, in co-op mode) who needs to push, pull and drag her dead father’s coffin (on wheels!) to a sepulcher worthy of his magnificence. He also happens to be a ghost, forever haunting his daughter until she gets the job done. His demeanor is loveable and abrasive in equal measure. With his guidance (which is actually more like his determinability to not get buried somewhere lame) you push forth through ancient temples, dusty caves and lava-filled caverns.

Not one to go out like a chump, the road to a higher plane is fraught with challenge. The king doesn’t just want to be buried – he wants to be covered in opulence. This means our dynamic duo must gather treasure and baubles to meet that end, as well as blueprints to get new gear that helps you on your journey. As a solo experience this game is amazing, but the stages are set up so that you can take more challenging routes and gather more expensive riches if you have a partner to help you tow daddy.

Your character plays like your standard mascot hero, replete with a jump, a small attack and a surfing stance in case you need to skateboard down a hill. Where things get interesting is in trying to maneuver the coffin over platforms, under tricky wickets and through various goodie-stealing monsters. The physics of your mobile sarcophagus is air-tight: the king’s chariot moves and bounces like you’d think it would. At any moment you can hook or unhook a rope to pull it up, slide it over and get it to where it needs to go. The controls are lovely as a whole, and after a while you feel magnificent in the way you can push and pull your father to where he needs to go.  There’s a sense of daring to the proceedings that builds thanks to your own arrogance. In short, this game is far more fun than it has any right to be.

The “Super” in Super Chariot comes from the addition of new gear that’s given to you at the outset that will help you along your way if you so choose. Things like a shield, a stronger attack and crampon-heeled boots for slippery situations. These make the game even more accessible than it already is, but can also be ignored if you’re looking for a stiffer challenge. The visuals have a painterly look to them that’s also inviting, with clever yet simple animation to go along with the wonderful narration. Both the writing and the voice acting are on point, making for a memorable experience. Add to this a beautiful and haunting soundtrack and you’ll never want to stop finding the right mausoleum for your da no matter how obnoxious he gets.

In general I’ve found that most ports to Switch fit the system perfectly, and this is no exception: the fact that the console has two controllers built in really helps out your ability to play Super Chariot in co-op. Although this is my preferred way to play it, this game does a brilliant job as a solo experience as well. It feels perfectly adjustable to any situation, which is why I give Super Chariot a most hearty recommendation. This is the most fun you’ll ever have trying to bury a parent, I promise!

Super Chariot is available for Switch and (as Chariot) for Wii U, Xbox One, PC and PlayStation 4. We reviewed the Switch version.

Disclosure statement: Review code for Super Chariot was provided by Microïds. A Most Agreeable Pastime operates as an independent site, and all opinions expressed are those of the author.