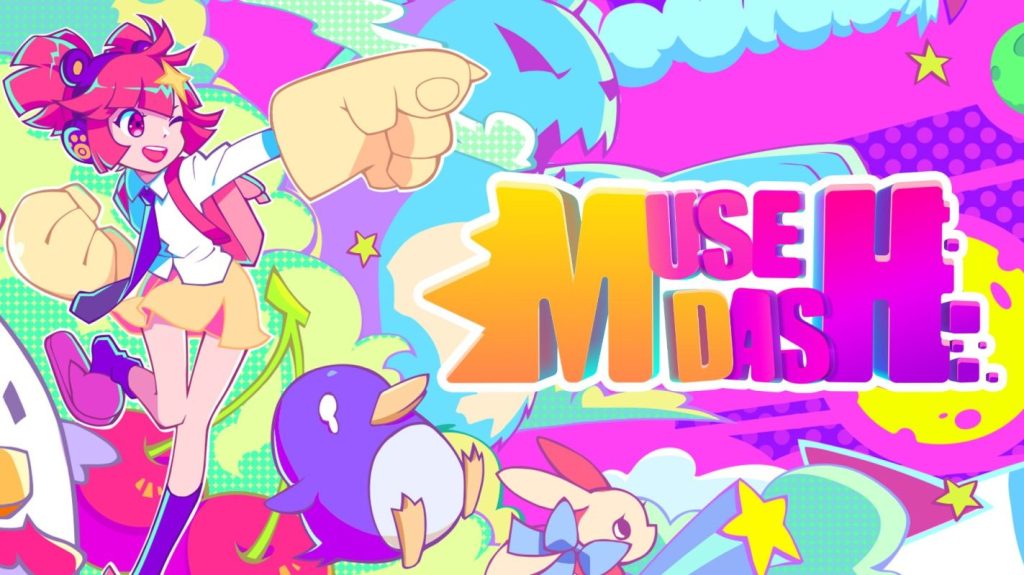 Muse Dash came out for PC and Switch this week, and after being beguiled by the infectious beats of the teaser trailer, I requested a review copy for PC. And it’s fun!

Rather than using descending notes like in most rhythm-action games, Muse Dash takes the form of a side-scrolling beat ’em up. The controls are incredibly simple – just two buttons, one to hit enemies on the ground and one to jump up and hit enemies just above your head. As you start a level, the bad guys file in from the right, and of course their attacks are linked to the beats of the music – although occasionally you’ll fight a boss that requires rapid pounding of the buttons to see them off.

But things are complicated by some of the enemy types. A circular saw that rolls in along the ground requires you to jump rather than hit it with a ground attack, and it’s easy to be caught out by this in the heat of a pounding J-Pop moment. Then there are some enemies that approach in the middle, between your two attack ranges, and these require you to press both buttons at the same time. Your life bar depletes with every enemy collision, and if it runs out you fail the level – but there are hearts you can grab throughout to top up your health.

And it works really well! It’s one of those ‘easy to pick up, hard to master’ games, where the simple inputs belie bewildering complexity – especially on the harder modes, as you battle a constant stream of enemies mixed with stars that require you to hold down one of the buttons and those crafty saws mixed in with rows of regular baddies.

There are around 50 songs to unlock by filling up an experience bar – the better the score you get on a level, and the harder the difficulty setting you choose, the quicker it fills up. It’s a good system, and it means that you can unlock new levels by replaying the songs you like and ignoring the ones you’re not a fan of, if you choose.

And speaking of the songs, there are some cracking J-POP tunes on here, although admittedly I’ve never heard of any of the bands, not being that familiar with the J-POP scene. For me, it was a great reminder of the years I spent living in Japan and my regular trips to the arcade to play DrumMania and GuitarFreaks, some tunes from which I could sing note for note even now. But if you’re not a fan of J-POP, then there’s nothing for you to see here.

In fact, your enjoyment of the game can be measured by how much you like the music – die-hard J-POP fans will be over the moon, but if you’re more into jazz or death metal, then this will probably leave you cold. In fact, if you ARE into death metal, I’m not quite sure how you got this far into the article. Still, I’m glad you did, nice to see you here, all are welcome on A Most Agreeable Pastime.

My major criticism of Muse Dash is that – as with all rhythm-action games – it can get a bit repetitive. In particular, I only spotted three different backgrounds being used in my brief time spent playing, so the levels can feel pretty samey after a while. And naturally, some tracks are better than others.

There’s also the slightly tired trope of skimpily-clad anime girls to deal with. You can unlock different characters and costumes as you play, with some offering buffs like extra health or increased points. But essentially the character-selection screen is a parade of ridiculously sexualised anime girls with ludicrously exaggerated bouncing boobs. This triggered an enormous eye-roll on my part – but you can decide for yourself whether the semi-nude cartoon ladies are a positive or negative point for the game.

I haven’t played Muse Dash enough to give a definitive review, but it’s certainly worth checking out if you’re a big J-POP fan. Speaking of which, ever since I started writing this review, I haven’t been able to get ‘Luvly Merry-Go-Round’ from DrumMania out of my head. Man, that tune was my soundtrack to Japan…

Muse Dash was developed by PeroPeroGames and is published by X.D. Network. It’s available on PC, Switch, Android and iOS.

Disclosure statement: code for Muse Dash was provided by Evolve PR. A Most Agreeable Pastime operates as an independent site, and all opinions expressed are those of the author.