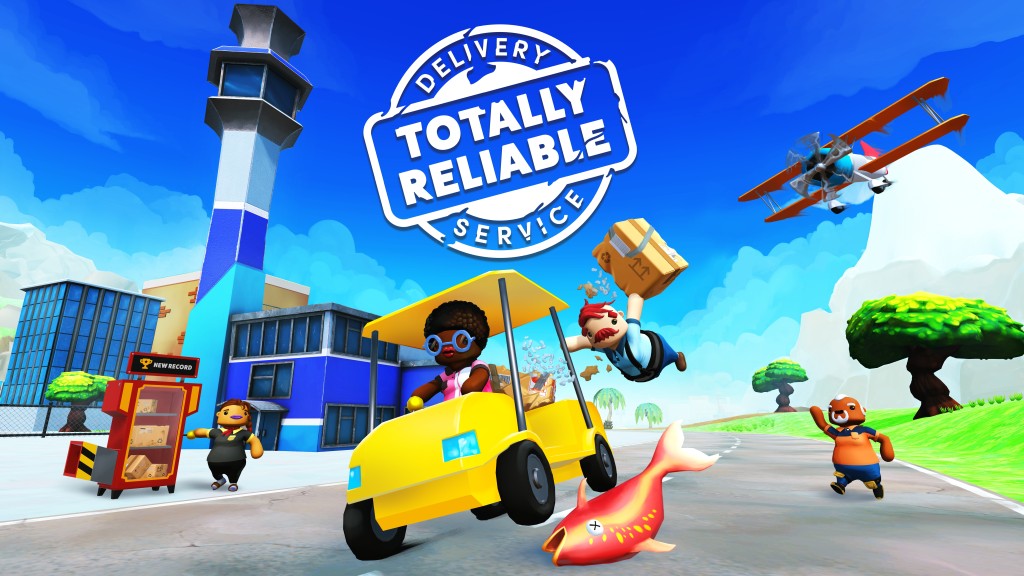 Totally Reliable Delivery Service is tough to evaluate because it’s not really a game in the traditional sense; it’s more like a play park, something that you play with rather than progress through. It’s the type of experience in which the more you put in, the more you’ll get out. In other words, it’s something that will appeal most to players with an experimental streak and a willingness to try different things – and perhaps most importantly, people who enjoy playing with others.

Totally Reliable Delivery Service is a sandbox game in the vein of Human: Fall Flat or Goat Simulator, where the fun isn’t necessarily in completing a task but in the hi-jinks that happen while trying to do so. This is peak environmental storytelling, the type of game that is best experienced with friends or onlookers. The game is very aware of this fact and is built for the occasion – you can have up to four players on one system fiddle around at one time, which can be a help or hindrance… or both, given the situation and the physics that are at play. You can customize your frumpy, wobbly avatar and then just, well, go off into the world.

Other than a very brief tutorial, the game is content with not-so-gently pushing you out the door and into the wide world. Totally Reliable Delivery Service’s low-poly world is well-built in that poking around and scoping things out is a joy even if it takes time for certain elements of the world to pop onto the screen. This also leaves you with a variety of ways to take your package from point A to point B, which waylays the actual tedium of doing so. The controls are intentionally loose; getting hold of boxes, driving cars and keeping both on the straight-and-narrow is harrowing in the most hilarious way possible.

In playing with my kids, they were gracious for a time in helping dear old dad tick off a variety of deliveries, but every session always devolved into them intentionally sabotaging the job for laughs. At first I wanted to see a wide spate of missions, but I eventually discovered that in actuality they’re a means to an end – that end being laughing because someone slipped off a helicopter and dashed themselves on a mountain or flew off a bridge going around a sharp corner. It’s the embodiment of the old “it’s about the journey, not the destination” bit your parents tried to push on you.

I’m usually a very deliberate and thorough game player, so it was nice to fall back into the simplicity and joy of play. As adults we sometimes forget to stretch our imaginations as much as we should, so it’s nice to find something like Totally Reliable Delivery Service to remind you to just have fun. Perhaps while playing chicken with a forklift and a dune buggy.

Totally Reliable Delivery Service was developed by We’re Five Games and is available on PC, Xbox One, PlayStation 4, Nintendo Switch, iOS and Google Play. We played the Switch version.

Disclosure statement: review code for Totally Reliable Delivery Service was provided by tinyBuild. A Most Agreeable Pastime operates as an independent site, and all opinions expressed are those of the author.