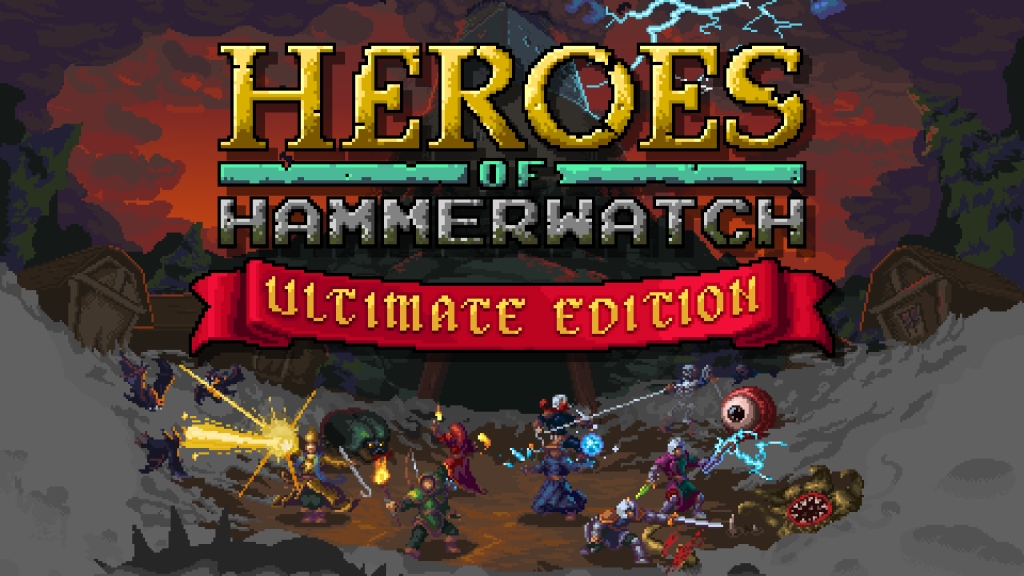 I don’t often get blindsided by new games these days, but when I was assigned to review Hammerwatch for Nintendo Life I was pleasantly surprised to find a game that took the endlessly combative treasure-hunting arcade precepts of Gauntlet and gave it a nice layer of player progression to make for a deeper and less oppressive action romp. It scratched a certain itch I forgot I had, without the hindrance of having to pump quarters constantly and being frustrated by money-grabbing design philosophies.

Now Heroes of Hammerwatch, the sequel to Crackshell’s top-down action RPG, has arrived, and it’s added a lot of neat new ideas that round out into what is almost a definitive version in my book.

Heroes of Hammerwatch touts itself as a rogue-lite; a context that for me at least still instills a bit of hesitancy. I don’t have the hours of time I’d like to devote to video games, so the idea of starting from scratch holds no appeal whatsoever. But although technically you end up back at the beginning of whatever area you’re in every time you die, the game is quite forgiving in that all of your experience remains for you to build upon in future runs. While there’s still the sting of dying close to the end of a level or losing a boss battle, the notion that you’re constantly working your way to better stats is a pretty good salve that actually pushed me to keep going.

Another good impetus to keep me plugging away is your ability to upgrade the little berg known as Outlook at the base of the Forsaken Spire. I’m a sucker for having a base in games because it adds this odd sense of security, and knowing you can build it up by collecting ore – which in turns grants you more abilities and power-ups – is even better. There’s something really nice about building a community, even if on a superficial level. It gives you this sense of camaraderie that makes your inevitable failures feel less harsh.

The game offers a good amount of classes for you to play around with, including all the stalwarts you’d expect, such as melee fighters, healers, ranged combatants and everything in between. The game is controlled in a twin-stick shooter style, which makes it feel very much like Gauntlet but with a better degree of control. Since I was playing solo, I stuck with either the paladin or the ranger, but every class is viable when playing cooperatively. The only bummer about Heroes of Hammerwatch is that there isn’t an option for coop play locally, meaning I had to play exclusively by myself – because I’d rather play with folk I know than random and potentially sketchy online unknowns.

Even though I had an inkling of what to expect from Heroes of Hammerwatch, that familiarity mixed with an addictive character and town progression loop sucked me in harder than I was expecting. Under most circumstances I’m all for a game explaining its systems to me thoroughly, but the learning process of discovering Hammerwatch’s ins and outs was oddly refreshing. And knowing that not all is lost when you find yourself slain makes this game far more fair and forgiving than its rogue-ish contemporaries. Your warrior may need food badly, but you’ll do better next time.

Heroes of Hammerwatch was developed by Crackshell and published by Blitworks, and it’s available on PC, Switch, PS4 and Xbox One. We played the Switch version. The Ultimate Edition includes all of the DLC from previous versions.

Disclosure statement: review code for Heroes of Hammerwatch was provided by Blitworks. A Most Agreeable Pastime operates as an independent site, and all opinions expressed are those of the author.