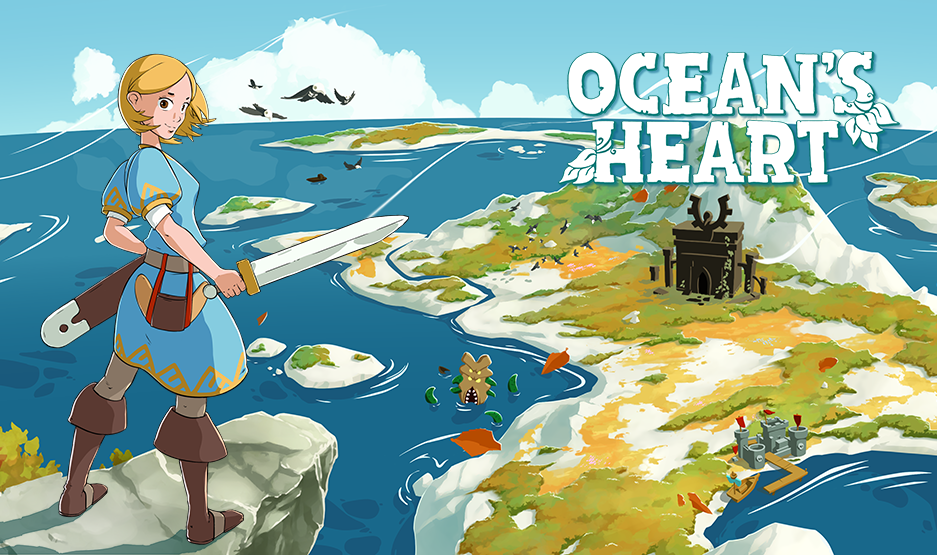 Ocean’s Heart plays like an interactive piece of fan fiction for the Legend of Zelda, which I mean in the most flattering way. You can see and feel so many nods to the adventures of Link, but at the same time they don’t distract from the journey you’re on with heroine Tilia. It’s a loving homage to a certain era of adventure game that wears it’s, ahem, heart on its sleeve – and I couldn’t help but become smitten by it. It’s a little rough around the edges, which isn’t too surprising considering it’s the product of solo developer Max Mraz, but it all comes across as charming and succinct rather than blatant and lazy.

Ocean’s Heart shows it’s adventuresome spirit rather quickly, as you’re tasked with searching for your missing father, who himself went out hunting for a gang of pirates that ransacked your home island. The game acclimates you to its stylings quickly as Tilia has to run an errand for dear old dad that ends with you getting your obligatory sword before venturing forth. Ocean’s Heart does a great job of teaching you the tricks of the trade by just letting you experiment with things, surreptitiously setting up obstacles instead of holding your hand. It helps the player to build confidence in their own abilities, and overall the game provides a fun sense of swashbuckling.

After leaving your sister to take care of the family saloon, you arrive at a port, where you’re given a couple of different directions to head off in, with a healthy smattering of side quests to boot. I know it’s cliché at this point to say that Ocean’s Heart is more about the journey than the destination, but the plot is predictable and really only serves to move you along. The swashbuckling and excitement of exploration are much more effective motivators to play than finding out where dear old dad ended up.

Ocean’s Heart borrows liberally from the Zelda playbook, but what really stuck out was the diversity of locales and their (relatively) realistic feel. There are sequoia-tinged forests, along with European-looking fields with windmills, and dreary coastlines replete with rain. Ocean’s Heart has a much more muted palette than Zelda, and it’s all the better for it, since it gives the game a heavy dose of personality that carried the experience for me.

Beyond that, Ocean’s Heart plays very much like a medley of ideas from the house of Nintendo, so take from that what you will. I personally like the familiarity, and it’s all executed so well that it came across more as a homage than a rip-off. There’s absolutely nothing wrong with using a template so long as you’re incorporating those ideas into your own ones instead of stealing them whole-heartedly. Are these moments noticeable? Yes. Do they detract from the experience overall? Nope! I was too busy having a fun old time exploring every nook and cranny of this intriguing world.

Ocean’s Heart is a gem of a game. To use another overwrought cliché, it’s very much comfort food – but rather than being an original family recipe, it’s more like a well-known favourite from an independent restaurant with its own distinct spin on the classics. There are very few Zelda-likes that are this well put together.

Ocean’s Heart was developed by Max Mraz and published by Nordcurrent Labs, and it’s available on PC adnd Switch. We played the Switch version.

Disclosure statement: review code for Ocean’s Heart was provided by Nordcurrent. A Most Agreeable Pastime operates as an independent site, and all opinions expressed are those of the author.