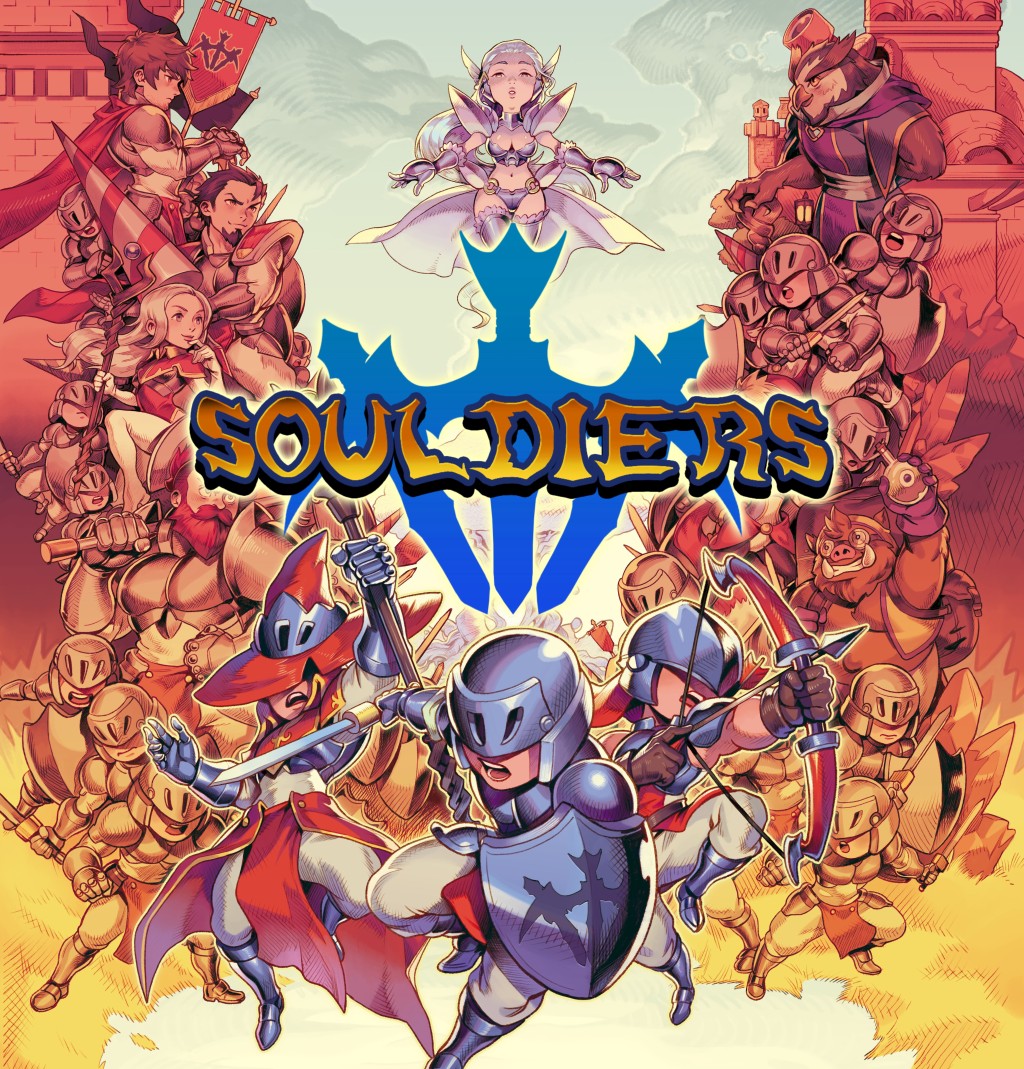 There are a lot of implications when you deign to call your game Souldiers, with its clear nod to the legacy of Dark Souls. Essentially, Souldiers is a 2D Metroidvania that adopts many of the sensibilities of From Software’s hit series. The laziest observation one could make is that this is simply a game designed to be brutally hard; but that’s overly simplistic, and ignores the intricacies that underpin the Dark Souls games, some of which Souldiers attempts to reproduce in 2D. So is the Souls nomenclature apt here, or is it just a fiddly – and empty – piece of wordplay?

Souldiers opens with a heavy dose of political intrigue, where your platoon is sent on a sketchy-feeling assignment at the behest of an equally sketchy member of the king’s retinue. Surprise! It goes south when you all plummet into a hole, are buried and summarily killed off. However, this is a fantasy-tinged experience, so you are given an option to travel to a place called Terragaya at the behest of a Valkyrie for an all-new adventure. It’s an interesting set-up that doesn’t lead you anywhere particularly special, but it’s an entertaining enough yarn to at least be a means to an end. Rather than taking up the sword of the captain of said army, you get to choose between three classes: swordsman, archer or wizard.

Each class has abilities in line with what you’d expect, each with their own particular move sets and progress trees to boot. But beyond the differences in combat suites, the way each character moves is the same: which is to say that they provide a very satisfying platforming feel that sees you maneuvering with a heavy but controllable jump, a dodge-roll that is damn near mandatory in most instances and the ability to cling to ledges just out of reach. The obvious upgrades flow at a decent rate, and while they’re all familiar, they still give you that boost in confidence to venture further into the world – or back into some previously unreachable nooks and crannies.

On the combat side, there’s a lot more strategy to be learned here than in your average exploratory platforming game. Most of the time it’s very deliberate; a nice callback to the clever naming. You can’t just attack willy-nilly without looking for openings, which means that the game is more defensively minded than many other Metroidvanias. To add another layer of complexity, you have the ability to switch your attack elements (air, sand, lightning, etc.) on the fly by using the right analog stick. There’s something very pleasing about watching your hero swap elements almost instantly as you try to maximize your damage output by using the right one against the right foe. The bestiary is a great resource for figuring who is weak to what, but with enough experimenting and good old fashioned experience you’ll find that the game’s challenge is minimized. Hm, very Souls-ian.

The world of Souldiers has to be one of the best 2D environments I’ve seen in a game of this ilk. It’s detailed in very smart ways that don’t necessarily distract the eye but definitely give the game a distinct sense of place. Unfortunately, after its brilliant opening – where you’re in a lush field with floating islands in the background – you’re then stuck in a cave for a few hours, but beyond that you get to explore gritty deserts, sun-drenched forests and dense mines. It’s beautifully constructed with plenty of memorable landmarks (and save points), meaning it’s rare to become totally lost.

The reviewer in me should probably point out the interminable load times, but I find it difficult to complain about that because the wait is worth it to have such a huge and fantastic world to explore. Beyond the aforementioned elemental control, there isn’t much in Souldiers that you haven’t seen before in Metroidvanias past and, yes, in Souls-likes, but what is here is so well fashioned that its familiarity is comforting and empowering. Developer Retro Forge gets the pass – their game is as advertised with its cleverly punny name.

Souldiers was developed by Retro Forge and published by Dear Villagers, and it’s available on PC and Switch. We played the Switch version.

Disclosure statement: review code for Souldiers was provided by Plan of Attack. A Most Agreeable Pastime operates as an independent site, and all opinions expressed are those of the author.