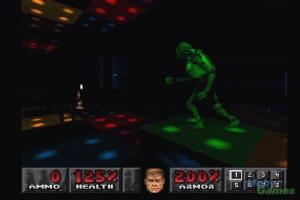 You emerge into the secret room and look around in bewilderment. Pumping disco music fills your ears, and a mirror ball twirls overhead, shedding its light on some very bizarre sights indeed.

On several podiums set around the room, the denizens of hell are throwing funky shapes with carefree abandon. On the podium nearest to you, a brown demon with red eyes and spikes protruding all over its body is doing his/her/its best to impersonate John Travolta in Saturday Night Fever, and somewhere near the far wall, despite a complete absence of limbs of any kind, a Cacodemon is desperately trying to emulate Olivia Newton-John. The disco lights flick constantly from red to green to blue, but no amount of lighting can disguise the pathetic display of ‘dancing’ laid out before you. You stifle a snigger, but you sense a Cyberdemon turn its wary gaze upon you as it practices mimicking the letters for ‘YMCA’ in a corner. You quickly shuffle out its view, but as you move out of sight you can’t help but notice it’s got the ‘C’ backwards.

Perhaps it’s best you leave before any more of Hell’s inhabitants take an interest in you… In the middle of the room is a glowing blue chamber that you instantly recognise as a teleporter from years of playing first-person shooters (see, all that game time didn’t go to waste). But where will it lead?

Step into the teleporter.