Is Mean Machines Magazine returning in some form?  If a tweet from video game publication luminary, Julian “Jaz” Rignall is to be believed, it may be in the works. 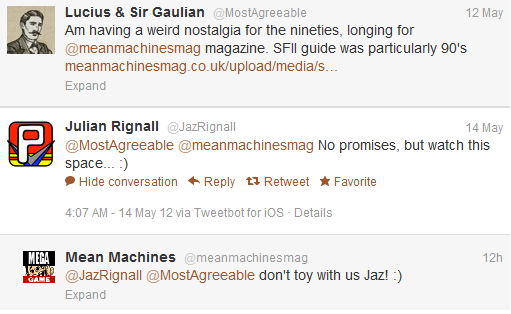 Mean Machines magazine was a video game magazine published in the United Kingdom and distributed globally as far stretching as Australia.  The magazine was a lynchpin of console coverage in many parts of the world throughout the nineties, and while nowhere near certain, a return in any form would be welcomed by fans of the fun and honest coverage that the magazine was known for.   Even after the end of Mean Machines, Rignall remained prominent in the industry heading up both the successful expansion of IGN and GamePro until its final issue in late 2011.

Rignall now maintains an incredibly insightful blog that is well worth checking out, and anyone interested in the magazine, an archive (of sorts) for the magazine Mean Machines Magazine is also maintaned online.