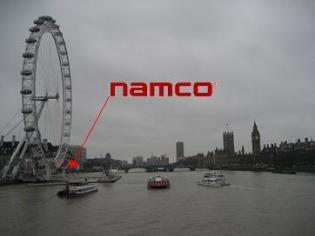 My good friend Tom was visiting London at the weekend, and after we’d finished looking round the excellent but nausea-inducing Brains exhibition at the Wellcome Trust, Tom piped up with an absolutely capital idea:

“Why don’t we go to the arcade? I haven’t been for years!”

Nice one Tom! So off we trooped to Namco Station on the South Bank, threading our way past the undulating queues for the London Eye and the hordes of tourists watching second-rate street entertainers. Well, most of them were second-rate anyway, but respect must go out to the guy playing the flaming tuba. I can picture the scene that must have occurred in flamin’ tuba guy’s flat several years previously: he’s just finished tuba practice for the day and puts the instrument down to make a cup of tea, but as he steams back into the room, a light bulb pops on above his head. He regards the tuba with a thoughtful eye, and thinks: “You know what would make this better? If it was on fire.”

From that day forth, flamin’ tuba guy’s life changed beyond all recognition.

It’s been many years since I last set foot on the hallowed ground of the arcade, so I was curious as to what I should expect. The first cabinet we came across was Guitar Hero Arcade , which sent out a clear message that the once traditional route from arcade to home conversion has well and truly been turned on its head. In fact, a good percentage of the games on show had their roots on home consoles, including Silent Hill Arcade, which incidentally looked dreadful. To be fair, we didn’t actually play on it, but we certainly weren’t enticed into spending our money on it by what we saw.

I suppose the major thing the arcade had going for it in the eighties and nineties was that it allowed you to play cutting edge games that you just didn’t have access to at home – or if you did, the home conversions were usually inferior to the arcade originals. Now that home consoles can easily keep up with the technology available in the arcade, there really seems to be little point in going there except for that ‘arcade experience’ – which is the exact reason why we visited Namco Station on Sunday. But given this, converting home console games to the arcade seems a ludicrous idea: who on earth would go out and spend money on an arcade version of a game that they already own at home? If anything, converting home console games to the arcade just makes the entire concept of an arcade look outdated and pointless.

The rest of the games on offer were a mixed bag in terms of quality, but they all had one thing in common: they were all driving or shooting games (with the sole exception of a forlorn and permanently vacant Tekken 6 cabinet). It’s sad that there’s such a lack of imagination in the arcade industry these days that a game basically doesn’t get made unless it involves driving or shooting (or preferably both). It’s fair to say that driving and shooting games have always been popular, but not at the exclusion of all other genres: after half an hour of shooting, followed by driving, followed by shooting again, I was pretty damn ready for a change. I even briefly contemplated giving Guitar Hero Arcade a go, but then I remembered I had it at home and didn’t want to waste my money.

That’s not to say we didn’t have fun – in particular, Razing Storm was excellent. It’s the second spin-off of Namco’s Time Crisis series after Crisis Zone, and although it’s available on the PS3, it has something the home conversions don’t have – great big vibrating machine guns that make your hands go numb. Now THIS is what the arcade’s all about. Also, it has giant robots in it, so you’ve got two massive pluses there already.

The other big highlight was OutRun2 SP, which was simply a joy to play. It sticks closely to the OutRun formula of blue skies and branching tracks, but now with a selection of Ferraris to choose from and even more great songs  (although I was pleased that there’s still the option to play Magical Sound Shower). OutRun was one of my favourite games as a kid, so it was great to play a sequel to it that improved on the original in every way.

Apart from these two gems though, the games on offer were pretty disappointing. One of the worst we played was Rambo – we should have known something was up when the attract sequence didn’t show any actual gameplay, just videos of the Rambo films. Upon sacrificing our pound coins, we quickly discovered the actual ‘game’ was basically an inferior version of Operation Wolf, but even less fun. The designers may just as well have replaced the ‘gameplay’ with digitised pictures of themselves mooning the player and shouting “SUCKERZ!!!”

Almost as bad was Need for Speed Carbon, which is another pointless home console to arcade conversion, except this time the arcade version of the game is considerably worse than the home version. Somehow, the designers have managed to make illegal midnight street racing incredibly dull – there’s no sensation of speed and it’s almost impossible to crash, so it’s just a case of keeping your foot to the floor and waiting for the finish flag. The machine we played on was actually faulty and had become stuck on free play, but after one go we’d had enough: it was that bad.

So the games were a decidedly mixed bag, but what was worse was the general air of decline. Several of the machines had burnt out screens, and most of the cabinets were several years old, although this is probably more a reflection of the dwindling output of the arcade industry as a whole rather than the specific arcade. More telling though was the lack of people – you’d expect an arcade in the centre of London to be heaving on a weekend afternoon, but we pretty much had the run of the place, and we certainly didn’t have to queue to get on any machines.

It strikes me that the modern arcade doesn’t have very long for this world, strangled as it is by the twin terrors of unimaginative games and fierce competition from home consoles. If the arcade is to survive, it needs to radically reinvent itself as an ‘experience’ rather than a dingy place to play expensive games you’ve already got at home. We need a new generation of arcade games that focus on the strengths of the experience – the social aspect and the outrageous one-off thrill rides that only the arcade can provide. Come on arcade developers, use some imagination! What about a game where you go over Niagara Falls in a force-feedback barrel? A space shoot-em up where you fly on the back of an animatronic octopus? An augmented reality game where you shoot down invisible attacking monsters that only you can see? Just churning out endless driving games is nothing short of laziness. And what about catering for the old farts like me with a retro section? I’d be back in Namco Station like a shot if I knew they had an original Defender cab.

The arcade needs saving… but who’s going to save it?