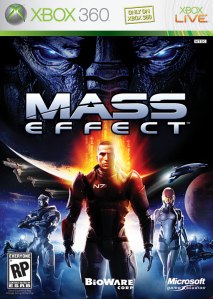 I caught up with the rest of the gaming world this week by finally, finally finishing Mass Effect. Loads of people, not to mention my co-blogger Sir Gaulian, have recommended that I play it, and it’s not hard to see why: the story is up there with the best I’ve seen in a video game. It’s just a shame that the rest of it feels… well, a bit unfinished.

For a start, the side missions are absolute bobbins. I’m generally somewhat of a completionist, so initially I set out to finish every single one of the missions on offer… until I realised that they’re all the same. In fact, they actually re-use the same game assets – it was something of a surprise to discover that every single planetary base on every single world comprises the same set of rooms and corridors. I imagine that they’re made from some sort of off-the-shelf base construction kit from the galactic version of IKEA. Even worse, finishing one of these many side missions doesn’t reward you with a slice of plot development, a juicy new upgrade or even a cut scene, just a paragraph of bland text saying something like: “Well done, you defeated the smugglers, the man/woman/alien who asked you to do it is pleased. Press A.” Rubbish.

Then there’s the bafflingly bland nature of the many unexplored systems that make up the galaxy. The game traps you on the Citadel (the government space station) for the first couple of game hours, so by the time you’ve successfully negotiated the political wranglings to become a Spectre agent, you’re itching to start exploring the universe and possibly do something other than stare at conversation trees. Unfortunately, it turns out that the universe is remarkably dull.

Every system consists of around four or five planets, but usually only one of these planets has something you can actually do on it. Travelling to the rest of them just elicits a screen full of technical information about the planet’s orbit and what it’s made of. Now I don’t know about you, but I couldn’t give a rat’s arse about how long a fictional planet takes to orbit its parent star – imagine if every episode of Star Trek just featured the crew cataloguing planet orbits and surveying for metal content. Granted, it might be a more realistic in terms of what space exploration is actually like, but all the audience wants to see is Captain Kirk laser the face off some angry hairy dude and lock mouths with an alien chick.

Even when you find a planet you can actually land on, exploration proves surprisingly tedious. Aside from the aforementioned identikit bases, there might be a crashed probe or a hunk of mineral to survey, and that’s it. Even worse, the game insists on you completing a QTE event every time you want to salvage something, as if pressing buttons quickly in a random order is in some way akin to stripping a probe of its innards or taking a geological sample. I blimmin’ hate QTE events at the best of times – God of War was almost ruined by them – yet Mass Effect insists on giving you one almost every time you want to interact with anything. Gah.

Then there’s that bloody Mako. Towards the end of the game my heart sank every time I was asked to pilot that damn planetary rover. It handles dreadfully, it’s slower than a snail crawling up a treacle hill, and trying to attack anything with it results in a farcical stand-off where you park directly in front of whatever you want to shoot and then hammer the fire button until one of you blows up. You can’t upgrade it either, so it remains shit for the whole game, and my heart sank when I realised I’d have to use it in the final mission (thankfully the godawful Mako section didn’t last long).

Speaking of the Mako, there was one point when I actually encountered something interesting when I was driving around on a planet – a rare Thresher Maw (think the spice worms in Dune) popped up in front of me and started having a go. After a few restarts and lots of frantic wrestling with the Mako’s piss-poor controls, I managed to defeat it, and it just disappeared. My girlfriend even commented on it, saying: “Is that it? I thought it might explode or something.” There is no excuse for the shoddiness of not bothering to include a death animation for such an enormous creature in what purports to be a triple-A title.

It was at this point that I realised Mass Effect just hasn’t been finished – there’s no other excuse for the ludicrous amount of padding the game gets away with. Don’t get me wrong, there is some quality gaming to be had in the main missions, but it feels like the design team just ran out of time, ideas and motivation when it came to creating the rest of the galaxy. If you’ve never played the game before, my advice would be to avoid the side missions completely and just concentrate on the main story – you won’t be missing out. I ended up doing around half of the optional quests before giving up in exasperation – I even shirked the Asteroid X57 DLC, which came free with my version. By that point I was thoroughly pissed off with the game after finishing the hellish ‘Geth Incursions’ side mission and I just wanted to get to the end.

From all of my moaning, you may think I didn’t enjoy my time with Mass Effect, but that’s not the case. Sure, the side missions are terrible, but the main missions are generally very good and genuinely exciting. There are also a few points where you have to make momentous decisions that have lasting outcomes, so it feels like you have a suitably weighty presence in the game world. On top of that, the amount of background information on the Mass Effect world is truly staggering: the designers went above and beyond the call of duty when it came to creating a believable galaxy made up of complicated politics between sentient races. I loved finding out more and more about how this world functions and seeing my actions change the fate of the galaxy – it’s just a shame that so much of the game is, frankly, a bit rough around the edges.

I have Mass Effect 2 waiting on my shelf, ready to be played next: I’ve heard that the sequel does a lot to iron out the flaws in the original (thank god). But tell me, should I bother with the side missions this time or give them a wide berth?