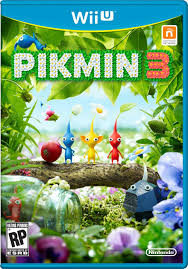 It’s fair to say the Wii U hasn’t gotten off to the best of starts. I met a gamer the other day and told him I owned a Wii U, and his look of surprise was palpable – he admitted that I was the first person he’d met who actually owned one. With just 10,000 Wii U consoles sold in Europe in the first quarter of this year, finding a fellow owner is about as rare an occurrence as finding someone who still doesn’t know what twerking is. Still, it pays to be a member of the exclusive club of Wii U ownership – after a slow start, there are some great games coming out for the console, including the just released Wonderful 101 and the brilliant, brilliant Pikmin 3.

I’ve been a big fan of Pikmin since the GameCube days, and it’s criminal that we’ve had to wait so long for the third game in the series, but on the plus side it’s easily the best yet. For a start, the graphics have benefitted enormously from an HD makeover: each leaf and stone is vibrantly realistic, and the fruit you collect looks so good you could almost reach into the screen and take a bite out of it. I never thought I’d spend so long looking at rotating images of virtual fruit, but the fruit gallery is like a meta-game in its own right.

The basic gameplay doesn’t stray too far from the winning formula of the original, although the flying Pikmin are a great new addition. They’re frankly hopeless in a fight, but they’re extremely handy for ferrying bits and bobs back to your spaceship in short shrift – although they have a suicidal blind spot for spider’s webs. The other major change is that you now have 3 characters available that you can switch between at any time, allowing for some fancy multitasking… if your brain can keep up. I’ve no doubt that masters of the game could finish it in a few hours thanks to some expert juggling of the three, but it does make your brain hurt after a while. Still, there’s an undeniable thrill from skillfully swapping between three groups of Pikmin in a desperate bid to get all your tasks finished before sundown.

I was pleased to find that it’s quite a long game too – it took me around 15 hours or so to finish, and I didn’t even touch the mission levels (which see a welcome return for the white and purple Pikmin). All in all there’s a surprising amount of content there, and it really was a delight to play from start to finish. If only all games could be this fun and rewarding.

[Penned in bliss by Lucius Merriweather.]