It’s time to finally say goodbye to my Wii U. My plan is to sell it and put the money towards a Switch, so I can finally get up to date with Nintendo’s current generation games. Also, the space around my TV is looking very cluttered – time to make some room.

I bought my Wii U on day one, and unlike a lot of people, I absolutely love it. It was my most-played console for years, and I worked my way through most of the major games for the system, like The Wonderful 101, Bayonetta 2, Pikmin 3, Super Mario World, and loads more. (Check out our top ten Wii U games here.)

But it’s basically a dead system now, and I only have a handful of games left to play on it – some discs, some downloads, and a few old Wii games. Here’s the list:

I’m unlikely to finish all of these, but I’m going to at least give them all a go. I fired up my Wii U the other night for the first time in ages – I actually had to blow the dust off it, a good indication of how little it’s been played over the past year. The sadly missed Miiverse has left a gaping hole in the console’s menu screen – where once my Mii was surrounded by others, gathered around different Miiverse communities, now he stands ever alone. Such a shame, Miiverse was great. 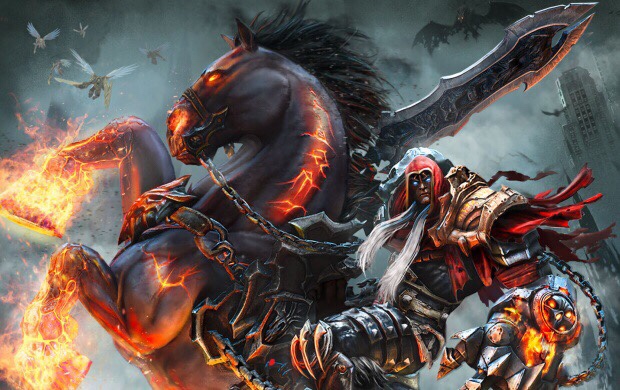 Out of the above games, I’ve already started playing Darksiders Warmastered – the last boxed title to be released for the Wii U – and I’m thoroughly enjoying it. It’s basically God of War crossed with Zelda, and that’s a thoroughly entertaining mashup. It came across as a bit too emo teenager at first, reminding me of the try-hard sequels to Prince of Persia: Sands of Time, but the voice acting really saves it. Mark Hamill is excellent as The Watcher, and Phil LaMarr, who voiced Hermes in Futurama, is wonderful as Vulgrim.

That said, it’s very difficult to play on the Wii U Gamepad owing to the constant button mashing and combos, so I switched to the Wii U Pro Controller, which is marginally better – but still awful. Seriously, this joypad is a black mark against Nintendo’s good name. It feels cheap, and the buttons are in a really awkward position – you have to really stretch your thumb to get to the Y button, not helped by the way the prong handles stick out into your palm. The Pro Controller came with the console, but I’ve only used it for multiplayer Mario Kart 8 up until now – and it seems I really wasn’t missing out. Thank god Nintendo saw sense and copied the excellent Xbox One pad for the Switch Pro Controller.

I’ll keep checking in with my thoughts on the Wii U and the final few games I’ve got left to play on it over the next few weeks. Join me in bidding farewell to this quirky yet much maligned console.

Check out the rest of the series:

Saying goodbye to the Wii U – Part 2: Darksiders Warmastered

Saying goodbye to the Wii U – Part 3: Pandora’s Tower

Saying goodbye to the Wii U – Part 4: THE FINAL FAREWELL