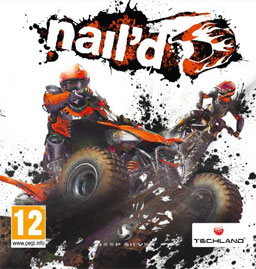 t’s how the instructions to Techland’s arcade offroad racer, Nail’d, should have read.  Jumping over canyons, flying through wind turbines, and riding your ATV or MXB through ancient greek romans are all done at an exceptional, almost unmatched, speed.  You’ll rely on almost inhuman reflexes to dodge incoming obstacles as the scenery blurs around you and you leave your opponents in a trail of dust and exhaust smoke.  It is an exhilarating ride that will have your adrenal glands pumping chemicals and your quick-twitch muscle fibres pulsing from start to finish.  It is a blink and you’ll miss it arcade racer, and its sense of speed never abates. Unless you crash into a ball of flames. And that’s pretty much Nail’d’ in a nutshell.  It’s got an amazing sense of speed that, when things are going right, is almost unrivalled.  But when things are going wrong the illusion that Nail’d is anything more than a slot car racer erupts into a screaming ball of scrap metal and brightly burning flames.  Not that there’s anything wrong with that.  You see there is a part of me that really appreciates what Nail’d brings to the table.  Its the same part that enjoys the rough edges of other rough not-quite top of the pile racers like Juiced 2 and Milestone’s WRC series.  I like these games because they’re fun, not because they achieved the video game equivalent of a Michelin 3-starred restaurant.

While playing through Nail’d I realised that the way I play, and more importantly appreciate games, has changed significantly over the years.  Years ago I would’ve written a manifesto about how video games are the next great art form, able to tell amazing narratives and truly immerse players in an alternative world.  I would’ve written that I like games that challenge me, both physically and mentally.  And lastly I would’ve written that games aren’t just about fun, they’re about pushing technology to its limits to create new experiences memories for those that experience them.  I was like the video game equivalent of the worst kind of food critic – the one with the Cravat that has forgotten why we eat food in the first place and rather seeks some pseudo religious experience from consuming tiny meals on giant plates. 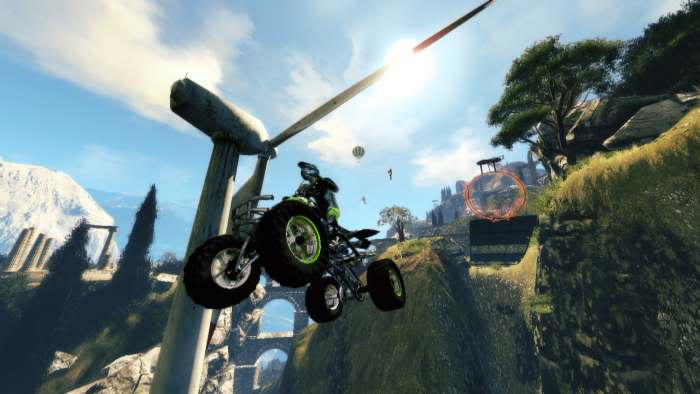 Oh how naive I was.  To think that that has almost reversed entirely as I’ve gotten older is paradoxical.  Rather than my video game palate becoming more acquired, mature, I have regressed and crave the sickly sweet taste of unadulterated entertainment over the more refined and textured taste of contemporary artistic video game pursuits.  Of course, like most humans that inhabit a wealthy and prosperous nation, my diet is diverse, and so rather than choosing one, I have the ability to choose them both.  But invariably, while I love a culinary delight every now and then, it’s the pedestrian pepperoni pizza that I keep coming back to time and time again.

Nail’d is almost by very definition pedestrian.  It is an arcade racer that seeks to achieve one thing and one thing only – speed.  And the developer chose its battle wisely, because Nail’d is so fast that all of its shortcomings .  Basically it is front-loaded so full of blistering speed that by the time the taste of travelling at what seems like a million miles an hour wears off, you’re so full of adrenaline that you won’t notice the game’s shortcomings, of which there are many.  But so to not dwell on the negatives let me just say that none of them are meal breakers.  Although the lacklustre menu of modes and the less than tantilising structure of the career mode is disappointing, it won’t stop you from wanting a dessert serving.

And that’s exactly what games like Nail’d do well.  Although not perfect it has this moreish quality to it that enables you to look past its flaws and the absence of any sort of depth.  It provides enough substance to keep me entertained without feeling the need to be an overly taxing or complex experience.  Sitting back and enjoying a couple of ridiculously fast races is perfect after a day of having my brain taxed by the vicissitudes of daily life.  It is the guilty pleasure that the internet-at-large often ignores in favour of the sensitive new age games that are popping up left right and centre  But there is certainly a place for both types of experiences. With video games able to deliver so many experiences limited by nothing but your imagination, it would be a shame to lose that quality, that fun factor , in the transition to a more mature industry with more progressive experiences.  In the pursuit of relevance and maturity of video games as an art form do we need to let go of where we came from and embrace change?  In answering that, I ask you to imagine a world without pepperoni pizza and what kind of an existence that would be. 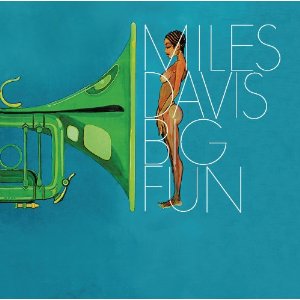