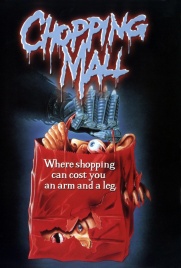 The first horror film I ever watched was a VHS of the less-than-B-Grade 1980’s ditty Chopping Mall.  And what a terrible film it was, combining somehow wooden and simultaneously overact lines delivering a truly retarded script, and a story that involved rampant security bots preying on the orgy-happy group of horny teens who were left in a department store over night.  Much blood was spilt and many boobs were bounced as shirts were torn away.  In short, it was a bit shit really, following the well-worn schlock horror formula to a tee.  Everything a teenage boy should love.  Not this one, though, and I distinctly remember turning to my mates as the credits rolled, face screwed up and saying “that was f**king stupid, mate”.  He snickered and smile, muttering something about how great the boobs were.

But despite its ridiculous lack of redeeming qualities, it played into an irrational fondness I’ve harboured for indoor shopping centres for as long as I can remember, and my secret desire to somehow be left to my own devices in one after hours.  Sure there were limbs being severed by overzealous robots with lasers, but I couldn’t help but imagine the pure shenanigans I could’ve been up to if I myself was locked in a shopping centre at night.

I find retail to be a fascinating beast.  The myriad of ways wily business people and marketers .  The art of naming a business is one that I respect, and as far as logo designs go, well they’re practically up there with the greatest of European masters for me.  The love of the play on words harboured by small businesses, particularly by food chains, makes the occassional trip through food courts absolutely worth braving the smell of the noxious meals for.  And the branding.  Oh the branding.  I distinctly remember spotting a little Asian joint by the name of FantAsia on a trip to Brisbane and having a little chuckle to myself, not just because of the name, but also the cute little silhouetted man with a paddy hat.  It was great branding, and  it must’ve been effective, because years later I still remember that tiny Asian food store in Queen Street.   But behind all of the consumer friendly branding is a fiercely competitive and cut throat microcosm of capitalism, and the idea of that really twiddles all of my knobs.

It was inevitable that this very strange thirst for concentrated capitalism and overworked consumerism would creep into video games.  I distinctly  remember the first time I saw a shopping mall in a screen shot for a video game – True Lies for the SNES – and how exciting a prospect that was to me.  I didn’t have an SNES, but on hearing there was a Game Boy version, my Christmas wish list practically wrote itself.  “Mum! Mum! Can I have True Lies on Game Boy for Christmas?!”. 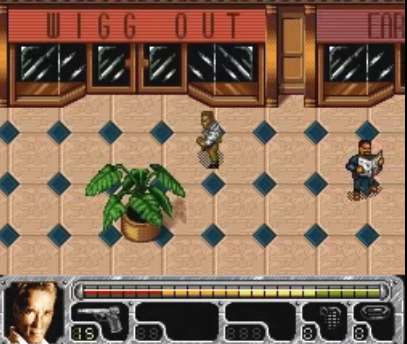 Sadly, I never did receive True Lies, and so my dream of virtual retail was to remain unfulfilled.

But fewer years than it seems later, Duke Nukem 3D came long, and partially satiated that same desire albeit briefly.  The first levels are still the best parts of that game, placing you right in the middle of a very familiar western-civilisation playground,.  First stop was an adult book shop.  Second was an adult cinema.  Third was an arcade.  There was something exciting about visiting places that were, if not entirely familiar from experience, were at least something you could find tucked away in the sleaziest of backstreets in the night spots of any big city.  It wasn’t the sprawling mall I dreamt of, but it was a small step toward that virtual retail playground I was longing for.  Duke Nukem Forever took one step closer, and the Duke Burger area of the otherwise lacklustre shooter was a real highlight, as you wade through .  I could imagine Duke Burger in full swing – packed with flirting teenagers, obese diners, and pimply workers – and that to me was novel if not magical.

And Duke Nukem Forever singularly highlighted the appeal to me of the depiction of retail in video games.  Just as Grand Theft Auto has done for years upon years, the world was given an edge of realism, padded out with the same meticulous details that make shopping centres sensory wonderlands.  Duke Nukem had Duke Burger, the Grand Theft Auto series has Clucking Bell and Burger Shot, even even Fallout had its own pre-apocalyptic mega store in Super Duper Mart, complete with a believable (and logical) supermarket layout, and its faux alternative-history brands like Cram and Nuka Cola.  And it was this attention to detail and the creation of worlds that extended beyond the moment-to-moment action in all of these games , in some cases some of my favourite games, that really wins over my heart.  But it’s when this is taken to the extreme, and concentrated into a melting pot of names and brands, that I get slightly giddy.

Because while these small food retailers and supermarkets are awesome,  it’s the sprawling malls that impress me on a more intellectual level.  The perfectly designed floor plans, the sights and sounds, all preying on your senses to encourage you to open your wallets with reckless abandon.  It’s psychological warfare at its most grand, and any time you walk through the brightly lit “Entry” door into one of these labyrinths, it’s a battle of wills. And that to me is a beautiful thing.  But it isn’t just me that feels this way.  On the design and role of shopping centres in society, a report prepared for the Shopping Centre Council of Australia said that:

And this is a sentiment echoed by state and local governments across the world, as they court developers, building it into their planning and urban renewal policies.  They may not be the most beautiful installations, nor the most cultural, but like it or not shopping centres are central parts of our society.

I remember the elation I felt when Silent Hill 3 pitched your every day shopping centre. When teen Heather wakes up in a deserted Happy Burger, running to the phone to call her dad to apologise for not calling sooner, it perfectly captures the social role a shopping centre plays in a teenager’s life.  The place for shopping, eating, seeing friends, and courting the opposite sex.  I can imagine Heather’s Dad in the image of my own parents, sitting in a chair worried sick about the whereabouts of their oblivious hormone-fuelled teenagers.

“I’m coming home now” she says as she hangs up the phone.  Of course then the nightmare begins.

And that’s where Silent Hill 3’s mall really comes into its own, as the bright and ‘normal’ worlds gradually gives way to the horrific ‘other world’ that the series is known for.  But Silent Hill also perfectly captures just how much of the “place” of a shopping centre is the people.  It’s not the architecture, the bright lights, or even the logos and names that I love so dearly.  But the people that are there, both of their own free will, or at the will of others.  There’s something uniquely eerie about shopping centres when they’re empty, lifeless.  Places that are usually bustling and brimming with people of all shapes and sizes, suddenly find themselves without a soul, and without the heart the beats the blood money in and out of cash registers.

Some, of course, would argue that the modern shopping centre is more akin to the evil and lifeless world shown in Silent Hill 3.  These days the local rags love to tell the story of the goliath shopping centre brands – the Westfields and the CFS Retail Property Trust Groups of the world – killing the little corner shops, and Saints Row II captured that all-to-common theme perfectly courtesy of its own evil mega-corp, Ultor. It was thematically perfect, not only for the world of Stillwater, but also as a commentary on the rampant state of capitalism and  more specifically corporatisation of almost every element of the western world including one of the central pillars of our market-based system itself in the trade of goods and services.

But despite all of these brilliant realisations of the ultimate in retail trickery, none of them captured that long-held dream I’ve had of being stuck in a mall with all of the toys and tricks at my fingers tips.  That was until 2006, when Capcom unleashed Dead Rising onto the world. Dead Rising brought Willamette Parkview Mall to life, complete with believable chain stores and circular floor plan design designed to.   I’ve written about the brilliant job Capcom did at ‘placemaking’, creating a real and believable world to play in:

From the kitsch logo designs of the chain stores scattered around the outside of a cluttered food court that at capacity wouldn’t be inviting enough to spend any time in over and above how long it takes to scoff down your meal, to the lairy turquoise and electric blue carpet and mock film advertisements that adorn the walls in the Colby’s Movieland cinema, Willamette Parkview Mall is like any other you’d find scattered around the suburbs of most western countries. It’s so real you can almost hear the parents yelling after their annoying children and the loud teenagers engaging in their post-pubescent mall-based mating rituals.

But Dead Rising was also a not so subtle and not so original commentary on capitalism and consumerism. And while Dead Rising 2 took its less than subtle social commentary a tiny conceptual step forward with the commoditisation of Zombrex™, it didn’t capture the same gameplay magic its predecessor did, even if it did take its veiled attack on western greed to that next level. It, quite frankly, just wasn’t as fun or novel.  At least we’ll always have the Willamette Parkview Mall.

If the brief history above has shown anything, it’s that the portrayal of large malls in video games hasn’t necessarily been in a good light. And for good reason because shopping centres aren’t pretty or enjoyable places a lot of the time, and honestly, if I could avoid them I would.  In my favourite episode of Daria, “Malled”, when asked to give an example of market “flow” in economics class, she perfectly defined malls when she answered “If we’re talking concrete [examples], I’d have to go with that repository of human greed and debasement: the mall.”  And for the most part she’s right, they’re bloody horrible places.   But there is a certain ‘speckled’ beauty to them, a certain charm, a certain attraction that makes them fascinating parts of our lives.  Sure they’re repositories of human greed, but they’re also places of aspiration and dreams, and more often than not places that give us something to strive and work for.  And that’s something every video game should strive to include.  Even if that something in the world of video games is a makeshift weapon.

Now if you’ll excuse me, I’m heading to the local video store to rent Chopping Mall. 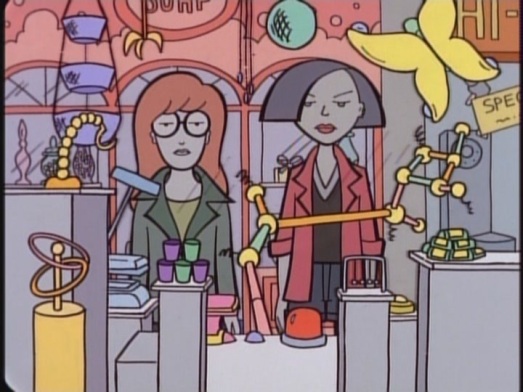