I thoroughly enjoyed TellTale’s take on The Walking Dead. The second season lost its way towards the end, with a final episode that dragged on forever towards a tepid conclusion, but overall I loved the characterization and tense atmosphere.

But for my money, The Wolf Among Us is even better.

For a start, the film-noir-style set up appeals to me more than the post-apocalyptic survival tropes of The Walking Dead. (Over at 101 Films You Should Have Seen, we’re big fans of film noir in all its forms… except Brick, which we hated. I was perplexed to discover that the film’s director, Rian Johnson, is going to head up the next Star Wars film. Let’s hope the stars don’t mumble their way through it like they did in Brick. Anyway, I digress…)

The Wolf Among Us is based on the Fables comics, in which characters from fairy tales are forced to flee from their native land and set up a new home in New York. Thanks to glamour spells, the various trolls and monsters are able to pass for humans in the Big Apple, and the Big Bad Wolf, aka Bigby Wolf, is installed as sheriff to keep the fables in line. The game itself tells an original story set decades before the comics start, in 1986. And as an original piece of storytelling, it’s wonderfully intricate and brilliantly realised.

The details are what make it so compelling. There’s tension from the off, as animal fables that can’t afford expensive glamour spells are forced to relocate to The Farm – a place in upstate New York that’s billed as somewhere that fables can be free to act as they want… as long as they don’t leave. Obviously, the fables who are sent there view it as more of a prison, but the powers that be – in this case, Ichabod Crane and Snow White, who run the ‘Business Office’ – see it as more of an administration problem.

The differing viewpoints of those in charge versus the fables struggling to get by at the bottom is a theme that is constantly referred back to through the five episodes, and it all builds to a satisfying climactic confrontation. Bigby, Snow and Crane see themselves as protectors, but fables who are forced to resort to prostitution and various other criminal activities see them as little more than uncaring enforcers.

It’s a dark, dark world, and it’s intriguing to watch the characters you know from childhood scraping a living in the grim streets of 1980s New York. Beauty and the Beast are constantly bickering as they attempt to adjust to living in a cramped apartment after experiencing the high life, and Tweedledum and Tweedledee have carved out a new career as sinister criminal goons with an unclear agenda.

The voice acting is superb throughout, and the characters are wonderfully developed. In particular, its gratifying to see Bigby struggle against his dark past, and you’re constantly presented with the choice to give in to his violent instincts or show compassion. The choices you make feed into the finale, in which the way you’re perceived by other fables can significantly affect the final confrontation.

Special mention also has to be given to the final twist, which had me scurrying to internet forums to see theories on what was really going on all along. I won’t give it away, but it’s a devilishly clever conclusion that had me rethinking everything that went before. 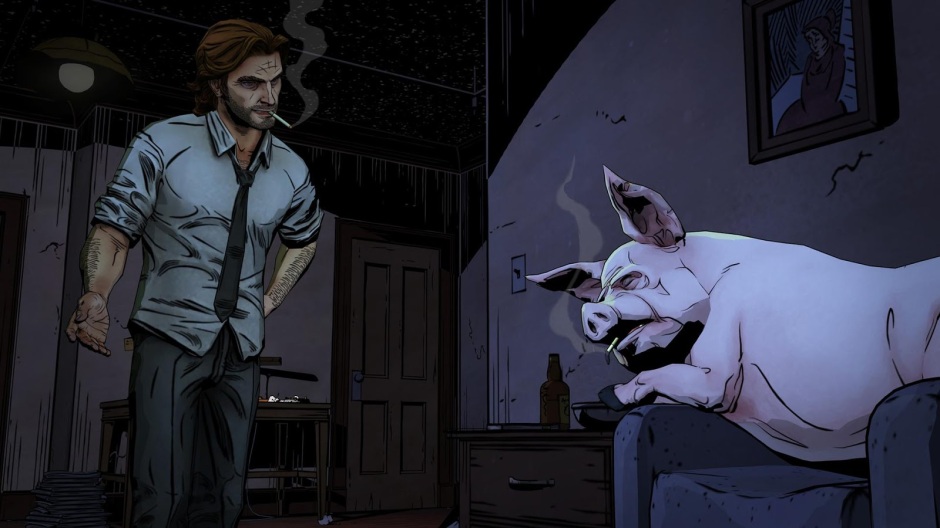 And now I want more – but the jury’s out on whether a second season is in the offing. Internet chatter seems to indicate that there may be a problem with the rights, and TellTale certainly haven’t confirmed whether it will be coming back. I sincerely hope it will, but there’s always the danger that, like The Walking Dead, the second season might not quite top the highs of the first.

In the meantime, I’m keen to work my way through the Fables comics – although seeing as there are 22 volumes (not including spin offs), each of which costs about a tenner, it’s looking like an expensive proposition.

Buy The Wolf Among Us (PS4) from Amazon UK.