The Forza Motorsport series has ballooned in terms of content over the last couple of iterations to include the likes of Formula E and NASCAR racing. Both of which I’ve ignored. This is generally because I find the idea of driving around ’round and ’round an oblong shaped track not particularly enticing. I’m sure there’s something to NASCAR: I’m just not sure someone raised watching Formula 1 and Touring cars will ever understand just what that something is.  Throw the sleep-inducing white-noise of a Formula E’s electric motor in the mix and it’s a decent way to fall asleep and not much else. Ask a women or man who loves the sound of a petrol-guzzling V8 engine what it sounds like and – if they’re like me – they’ll probably tell you it sounds like a Formula One with a serious case of laryngitis.

Not much to see here, then. Well so I thought until I was engaged in an epic 20-minute battle between two other same-spec cars on the Daytona International Speedway. There were tenths or hundredths of seconds in it with any slight mistakes in racing line or grip would see the leader forfeit first-place. Suddenly I’d never been so excited to be behind the wheel of my ABT Schaeffler Audi Sports Formula E car.

This all culminated in a swift inside overtake by the bloke in second-place at the end of the penultimate lap. Naturally, as I thumped the lounge next to me, I felt a bit like a frustrated Niki Lauda watching James Hunt sail by. As I gained my composure though – only a hair’s breadth away from the tail of first place – I realised if I pulled off the lap of my life I could take the lead back.

And so I drove for my virtual life. Hands gripped tightly on the controller, I’ve never felt so fixated on a video game in my life. Finger on the throttle, I steered the car to within an inch of the perfect racing line, never more than a couple of centimetres from the back of the car in front.  On the last bend I spotted my chance and veered ever so slightly to the inside, knowing that any slight loss of tyre traction would slow me down. I was gaining ever so slowly but it was largely out of my control as I kept the car at top speed hoping the metres gained on that last bend would be enough.

And it was. Just. As I took the lead just before the finish line in a photo finish.

So drained was I after the race that I called it a night and headed off to bed. It’s no secret that I love shedding tenths of seconds off of lap-times, but this epic Formula E showdown was really something else.  So while I won’t be watching NASCAR or Formula E anytime soon, I certainly won’t be shying away from their events in Forza Motorsport anymore. Here’s to trying new things. 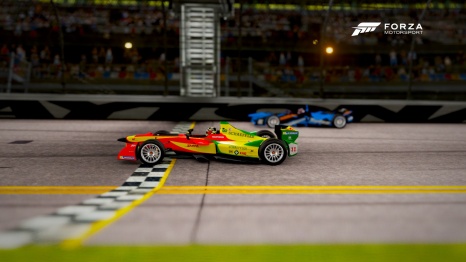 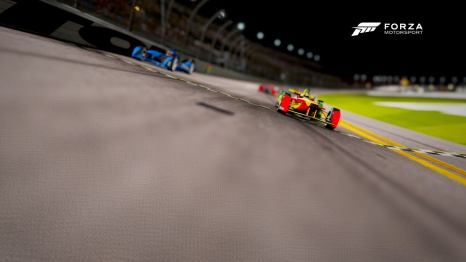 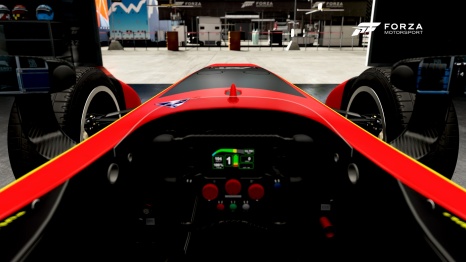