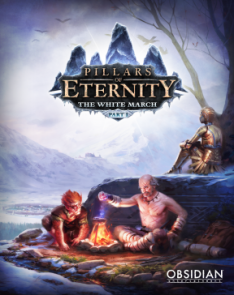 Wow, has it been two whole years since Pillars of Eternity came out already? And Parts 1 and 2 of the expansion, The White March, have been out for about a year already too? Time sure flies when you’re having all this fun. Anyway, Pillars of Eternity brought us back to the wild world of CRPGs, in the vein of classics like Neverwinter Nights, Baldur’s Gate, and Planescape: Torment. On top of offering a vast Dungeons & Dragons-ish world, bursting with quests and conundrums, it also boasted some of the best writing to be seen in a game. It made me stop and reconsider my views on the nature of religion, and I’m not even religious.

Now The White March doesn’t quite reach the heights of storytelling that the main campaign does, but it still manages to tell a very interesting new tale, filled with many new bizarre moral quandaries for you to agonize over. This expansion brings you to the frozen northern area of the world, where you’ll travel to ten new areas, most of which contain additional sub-areas and/or multi-floored dungeons. Just like the main campaign, these locations are littered with enough quests, battles, and secrets to keep you busy for quite some time. To be more specific, somewhere in the neighborhood of 20-30 hours of content, depending on how thorough you are.

On top of all this new real estate, you’ll also meet three new companions to recruit, each with fascinating backstories and personal quests to complete. My favorite was Zahua, the filthy masochistic monk that you find hiding in a barrel of brine and fish heads, who gains power from wounds and a healthy diet of magic mushrooms.

There are also the new soulbound weapons, each of which can be permanently bound to characters and have their own sets of mini-quests that can be done to level them up into very powerful legendary weapons. Naturally, there are plenty of new standard unique pieces of gear to be found too.

Speaking of weapons, the combat is more of the same challenging tactical battles. This isn’t one of those games where you can just click the attack icon and wait for your party’s A.I. to sort it out. Most of the time, especially in the more difficult fights, you’ll need to micromanage your characters and their abilities and apply them both strategically (although there is an Easy mode too, if that doesn’t sound like your thing).

And beware, some of the optional areas and quests are extremely difficult and it’s usually not very clear that this is going to be the case until you find yourself right in the middle of a nasty fight that you have no chance of winning. For instance, The Siege of Cragholdt quest chain becomes available immediately at the same time as the main White March quests and is apparently intended for max level characters, but it doesn’t tell you this anywhere in-game. If you do like I did and just charge right in there because it’s available first, you’ll find yourself having to fight with everything you’ve got just to barely make it through the initial “easier” groups of enemies, and then if you manage to get past them, get absolutely destroyed by the next section.

Overall though, it’s a very nice expansion to an already great game, that offers a ridiculous amount of new content compared to the bite-sized little DLC levels that have become the norm for most games today. Good news too, for everyone who hasn’t gotten around to this yet, or just doesn’t do much PC gaming, there’s a new Complete Edition of Pillars of Eternity coming to consoles in August. This is a must-play for any RPG fan, so check it out quick before Pillars of Eternity 2 gets here!