Super Castlevania IV finally brought Castlevania to the 16-bit world and did quite a fine job of it. Konami really went all out with this one, taking advantage of every bit of the Super Nintendo’s new technology. The backgrounds are highly detailed, animated, and often multi-layered. The vaunted parallax scrolling is also applied to the level in some interesting ways, making for some great background effects and that one very cool, but very short, level where the rooms start rotating.

Once again there’s a killer soundtrack too. I probably say that about just about every Castlevania game, but man, they just have some really good soundtracks, and this one is one of my favorites out of all of them.

Beware though, this game gets ferociously difficult in the later levels, with some very nasty platforming segments, and a final level that throws four super tough bosses in a row at you. At least they give you a password system though, so you don’t have to do it all in one sitting. 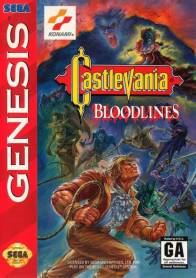 Castlevania Bloodlines is an unusual, but enjoyable entry in the Castlevania series. This time you’re in the early 1900’s (over 100 years after the previous games…and all of the sequels, which went right back to the 1800’s), facing off against…Dracula’s niece? I didn’t know Dracula even had a brother. He isn’t mentioned at all here, but I’m just going to assume that his name is Giuseppe the Impaler.

Anyway, it’s a decent game, with some nice visual design and music like usual, but I can’t help but get that feeling that this was another outsourced title. There are so many weird little changes and so few recognizable enemies that it feels slightly out of place.

It feels like an odd step backwards too, after Super Castlevania IV. While it’s still a perfectly enjoyable and well made game, it can’t help but feel a little clunky and clumsy compared to all the fancy enhancements in the previous game. You can also choose to play as some random new guy with a spear, but I don’t know why you would really want to do that in a Castlevania game. 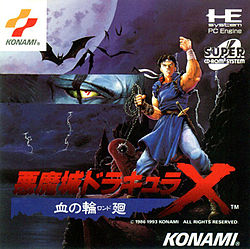 The next game in the series was Akumajō Dracula X: Chi no Rondo, a.k.a. Castlevania: Rondo In Blood. This one only came out for the PC Engine, a.k.a. the Turbografx CD, and only in Japan. An English port was released overseas, Castlevania: Dracula X, but our filthy Eastern consoles hadn’t quite reached that level of CD-ROM gaming yet, and so we ended up with a pretty dumbed down version of the game.

Many years later we would see The Dracula X Chronicles on PSP, which was much more similar to the original version, but was still very different, having been completely remade using 3D graphics. I had always heard that the original was the ultimate version, but never had a chance to play it until the modern wonders of the internet once again graced us with a translated copy.

Now I finally understand. You can really see the resemblance to Symphony of the Night here (which was a direct sequel to this game, not Bloodlines, as the incorrect translation in the beginning of Symphony claims). The visual style and CD music are both amazingly similar to Symphony, though slightly less polished. The gameplay is a lot more complicated than the linear SNES version, with multiple secret paths to be found in each level, that lead to alternate levels and bosses, and a few secret maidens to rescue. There are also some anime-style animated cutscenes with full voiceovers, though these are a bit goofy.

I must say, I really do much prefer this version to either the port or the remake. It’s no Symphony of the Night, but it was a much more exciting next step for the franchise than the Super Nintendo port had led us to believe back in the day. It’s definitely a version that’s worth playing if you can get your hands on it one way or another. Turns out that the full Rondo in Blood is actually unlockable on the PSP game, so I guess I’ve actually had it right here and ready to play since uh…*looks it up*…2007?!? Oops!

Thus ends another episode of You like Castlevania, don’t you? Tune in next time for Symphony of the Night with a twist, trying to force myself to play and enjoy Castlevania 64, and more!