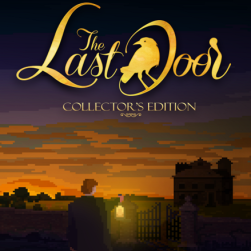 The Last Door is actually technically two games, as it was released episodically over the course of two separate standalone seasons, but as they both make up a single complete story, let’s just call it all The Last Door for simplicity’s sake.

Anyway, The Last Door is a point and click adventure game by The Game Kitchen (developers of the upcoming game Blasphemous, which you may have heard of by now).

This is a very Lovecraftian adventure, where you end up having to do a good deal of detective work in order to unravel the mysterious circumstances surrounding the death of an old friend, which naturally involves a bizarre cult and unspeakable supernatural beings. In typical Lovecraftian style, it focuses more on building an atmosphere of dread over what strange things lie waiting for you in the various dark and treacherous locations you explore, rather than jump scares or overt images of creatures and gore.

You’ll be told many haunting stories, investigate many scenes of terrible death and destruction, and hear many discomforting noises coming from writhing things hiding in the shadows, but you almost never actually witness any of it directly. It’s a credit to the designers and writers that these methods are so effective at creating a creepy atmosphere, especially when the graphics look like they’re straight out of the VGA era of PC adventuring (not that there’s anything wrong with that).

However, while there are many well-made set pieces and scripted events, more than enough to keep things interesting throughout the eight episodes, I must say that I didn’t find the characters or the core plot particularly memorable. The two characters you play as do a lot of questioning and listening, but don’t have much substance themselves, and the motivations of the secret cult are nothing you haven’t already seen before. Still, it manages to be a compelling game anyway. The well-crafted atmosphere manages to carry it surprisingly far. Not far enough that it will become one of my new favorite horror and/or adventure games, but enough to make the experience a satisfying one that makes me look forward to Blasphemous even more.